What Made Amalek So Evil? 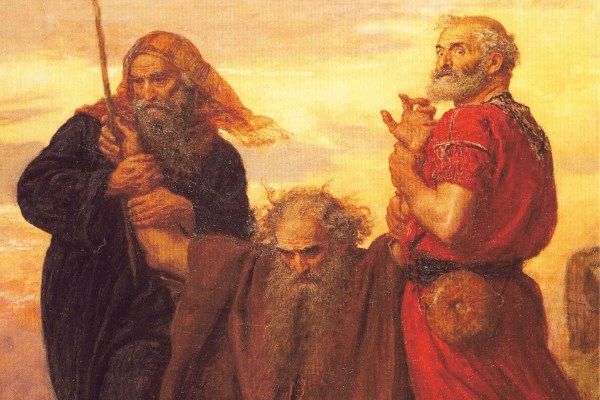 Amalek came and fought with Yisrael at Rephidim.

The Hebrews are attacked by the Amalekites in Rephidim. Joshua is ordered by Moses to lead Israel in battle, and Moses watches from a hillside with the staff of God in his hand. When Moses’ hand is raised, Israel prevails, but when it is lowered, Israel falters. So he keeps his hand raised through the entire battle, even having assistants support him so that the battle will go in Israel’s favor. 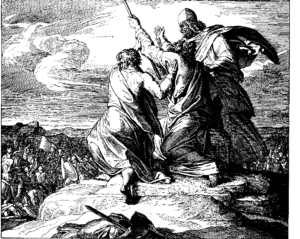 Battle with the Amalekites, by Julius Schnorr von Carolsfeld

The conflict, Israel’s first battle after leaving Egypt, is disturbing as Amalek attacked “all the stragglers in your rear” (Deuteronomy 25:18).

The nation of Amalek descended from Abraham, its founder being the grandson of Esau. Amalek was the son of Eliphaz, the son of Esau, and Eliphaz’s concubine Timna (Genesis 36:12). According to a midrash, Timna was a princess who had tried to convert to Judaism but had been rejected by Abraham, Isaac, and Jacob. She replied that she would rather be a handmaiden to the dregs of this nation than be the mistress of another Nation, and therefore married Eliphaz. To punish the Patriarchs for the affront they had made her, she was made the mother of Amalek which would cause Israel much distress.

The Amalekites lived to the south of the Land of Israel, in what is now known as the Negev Desert. In Deuteronomy 25:17–19, the Israelites are specifically commanded to “blot out the remembrance of Amalek from under heaven” once they have taken possession of the promised land, in retribution for “what Amalek did to [them] on the way as [they] were coming out of Egypt.” At the same time, the nation was commanded to never forget the evil deeds that Amalek did.

The first king, Saul, was commanded by the prophet Samuel to finally wipe out Amalek. Saul was victorious against the Amalekites but spared the choicest of their flocks and the Amalekite king, Agag. When Samuel found out about Saul’s disobedience, Saul lost his right to kingship. Samuel then killed Agag himself. Before he was killed, Agag sired a child who would keep Amalek’s lineage alive. One of this child’s descendants was Haman the Agagite who, some 500 years later, sought to wipe out the Jews of the Persian Empire under King Ahasuerus. 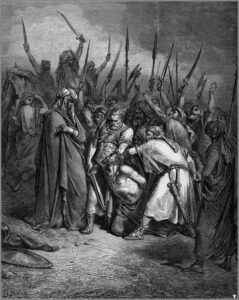 Gustave Doré, The Death of Agag

According to the Midrash, the Amalekites were sorcerers who could transform themselves to resemble animals, in order to avoid capture. Thus, in I Samuel 15:3, it was considered necessary to destroy the livestock in order to destroy Amalek.

There has been much conjecture about the trait that singles out Amamlek. Rashi goes into depth on the verse in Deuteronomy 25:18 which states he surprised, or happened upon, you on the way. The word for ‘happened’ ( קָרְךָ korcha) also denotes ‘cold’ (קר kar). Rashi explains that this means the Amalekites “cooled you off and made you [appear] tepid, after you were boiling hot, for the nations were afraid to fight with you.”

From the word happened we also learn that Amalek represents the belief in chance, of the haphazard dictates of “fate” and “destiny,” which opposes the Jewish belief in Divine providence. Amalek’s philosophy negates the concept that there is a purpose to humanity or to creation itself–again the antithesis of Jewish philosophy.

Another explanation is based on the Gematria (numerology) of Amalek (עמלק) being 240—the same as the value of the Hebrew word for “doubt” (ספק). Amalek’s chief weapon is to foment doubt among the faithful.