What we can learn from the mighty lion 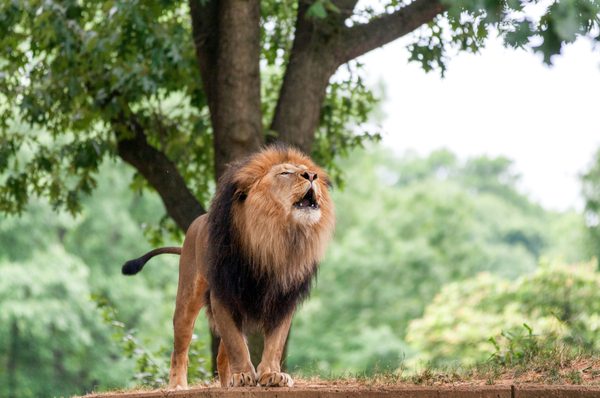 Does a lion roar in the forest when he has no prey? Does a great beast let out a cry from its den without having made a capture (Amos 3:4)

In ancient times, the Land of Israel was filled with a variety of animal species, including lions, wolves and leopards, some of which are still found in Israel today. Before lions became extinct in the region sometime after the 13th century, they inhabited the forested areas of the country. Because they were so common in ancient Israel, there are many references to lions in the Bible both as metaphors and in historical references. In fact, the lion appears over 150 times in the Hebrew Bible!

Jacob compares Judah to a lion when he blesses his children before his death (Genesis 49:9), Samson kills a lion with his bare hands in Timnah (Judges 14:5-6) and a disobedient prophet is killed by a lion on the road from Bethel (I Kings 13:24).

In Rabbinic tradition, the lion is referred to as “The king of the beasts” (Hagigah 13b), and the bravery of the lion is reflected in the rabbinic passage which says “Judah ben Tema said: Be strong as a leopard, and swift as an eagle, and fleet as a gazelle, and brave as a lion, to do the will of your Father who is in heaven (Avot 5:20).

Though the Land of Israel was filled with some mighty and dangerous animals like the lion, God promises that when the Jewish people obediently follow His commands, these animals would not pose a threat, as it says in Leviticus (26:6), “I will grant peace in the land … I will give the land respite from vicious beasts.” Should the people sin, however, the animals would become their enemy (Leviticus 26:22). Jeremiah reflects these verses when he describes the dangers that awaited the besieged, sinful, Israelites by comparing them to wild animals preparing to attack: “Therefore, The lion of the forest strikes them down, The wolf of the desert ravages them. A leopard lies in wait by their towns; Whoever leaves them will be torn in pieces. For their transgressions are many, Their rebellious acts unnumbered” (Jeremiah 5:6). The message of these verses is that when we sin we will be punished harshly, but if we follow God faithfully he will provide us with divine protection from all of life’s dangers.

Another comparison to the lion is found in today’s verse when the prophet Amos asks “Does a lion roar in the forest when he has no prey?” A lion roars when he is about to attack his prey. An astute animal who hears a roar understands that the lion is about to attack, and rushes to escape. An unperceptive animal, on the other hand, will get caught and destroyed. The message to the Jewish people is to pay attention to the warning signs of impending destruction, and do what is necessary to prevent it.

God sends us messages all the time. Those who choose to ignore them will suffer the consequences. But those who are astute and attuned to the messages that God sends us will be able to take them to heart and make the necessary changes to His life in order to find favor in the eyes of the Lord.