War or Peace: Why Does the Torah Command Us to Wage War? 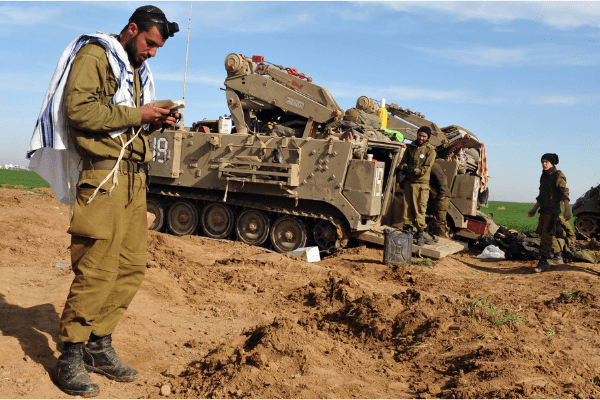 Moshe spoke to the people, saying, “Let men be picked out from among you for a campaign, and let them fall upon Midian to wreak Hashem's vengeance on Midian.

A young man sought spiritual perfection so he set out to find a guru. After traveling to Tibet, he spent weeks climbing a lonely mountain, finally arriving at the peak where a wizened old man sat on the rough stone, his legs crossed, his frail body exposed to the wind and snow.

“What do you seek?” the old man asked.

“No problem,” the guru answered, reaching behind a nearby boulder and producing an M-16. “Take this and kill all your enemies, all the people who love evil. Come back when you are done.”

It seems ironic that when God took the Jews out of Egypt, he specifically avoided the land of the Philistines in order to avoid conflict, but commanded them to wage war against the inhabitants of Canaan.

Just as God brought the Jews out of Egypt without having them lift a sword, He could have brought them into the land without a battle. But as the Children of Israel prepared to enter the promised land, it became clear that this would not be a tranquil or meditative process. Even before God commanded them to wage war against the inhabitants of the land, the Jews were commanded to exact revenge against the Midianites for seducing the Israelites to sin (Numbers 31). They were commanded to wipe out the nation of Amalek, anywhere and at any time. And the Jews were later commanded to wipe out any remnants of the seven nations that remained in the land.

Is this the spiritual ideal they left Egypt for? Was non-stop war their future?

Isaiah (4:2) describes a very different future, a vision of nations “beating swords into plowshares” and a world in which “they shall never again know war.”

If pacifism will be the Messianic ideal, then why command us to wage war?

One perspective views wars as an unfortunate necessity thrust upon us by circumstance. The Torah comes to teach us how to cope with this flawed reality. In the Torah’s terms, however, all is not fair in war. It is not a suspension of our service to God. Even when we are locked in a horrific struggle for survival, there are rules and limitations. Precisely because we are servants of God we must follow these rules even when fighting for our lives and our land. War is allowed in order to survive in this world as it is now, but it is certainly not the ideal.

This would mean that if everyone put down their weapons and refused to fight, war would cease to exist and the post-messianic peaceful utopia would begin. But in the meantime, if war is waged, necessity demands that it be waged effectively, achieving absolute victory.

But there is another perspective of war in the Bible. In the Biblical framework, war is a default that serves a purpose. It should be noted that there are three categories of war in Jewish law: milchemet mitzvah (a commanded war) which is an existential conflict in the land of Israel, milchemet reshut (optional war) waged outside of Israel for material gain, and milchemet Amalek (war against Amalek) in order to wipe out Israel’s perennial enemy.

According to this approach, wars are built into the Torah from the outset. They are, like everything in the Bible, for our own good. The possibility of war guides our actions, forcing us to choose a path away from it, the path of good. It forces us to choose to heal and mend rather than destroy. With the possibility of war, Man is confronted with his own destructive capability. And through the power of choice, Man can also realize his ability to heal, nurture, create, and build.

As this aspect grows in Man, the final redemption and the era of peace come closer.

War is not an ideal or an end unto itself. Though the accepted position in the world is that war is a necessity, the real purpose of war is to heal and change us. A war is only really won if we become different people as a result. And when that happens, it brings us closer to the peaceful time of the Messianic era.