War or Marriage: Love is a Battleground 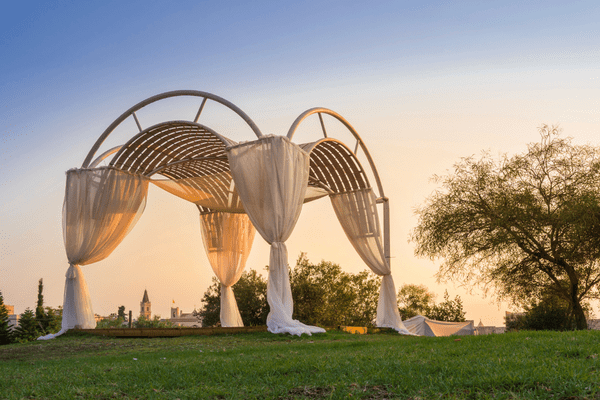 Is there anyone who has paid the bride-price for a wife, but who has not yet married her? Let him go back to his home, lest he die in battle and another marry her.”

I struggled to find my wife, so I was overjoyed when I finally got married at the age of 39. Everything was fine until I got a letter in the mail from the IDF telling me to report for reserve duty. My wife was not happy about my leaving for three weeks but we were both strongly Zionistic and, as a combat medic, I was needed. So I pulled my fatigues out of the closet, polished my dusty boots, and showed up for three weeks of border patrol. That year was the intifada and I got called up three times.

In retrospect, was I wrong to go? The Bible lists three exemptions for discretionary wars; a new house, a new vineyard, and a new wife (Deut. 20:5-7). I always understood that they were a euphemism or excuse to hide the real reason, the fourth reason listed in the Torah, fear. I thought that when war was announced, some men ran out to plant, build, or find a wife in order to have an excuse not to go to war. I loved my wife and I was not going to use her as an excuse to shirk my duty.

But the truth is that the reason the Torah does not allow a newly married man to go off to battle is that marriage is more important than war. This is seen in Rashi’s commentary on that verse:

“He should return home, for fear that he might die in battle, because if he does not obey the Kohen and go back to his fiancee, he deserves to die!”

Implicit in Rashi’s imperative is the understanding that the exemption for a newly engaged man is different from the other exemptions. Rashi implies that being married is more important than going out to war.

Why the difference? Why is the engaged man required to leave the army, while the other exempt men are permitted to fight if they so desire?

LEARN WHY MARRIAGE IS MORE IMPORTANT THAN WAR

The story is told of a young man who was about to get married and the rabbi, Rabbi Mendel Futerfas, asked to inspect the ring. In Jewish law, the ring must be simple and unadorned.

“Please show it to me, so I can see if it’s kosher,” Rabbi Mendel requested.

“But what else do you see?”  Rabbi Mendel asked.

The young man was confused and could not answer.

Rabbi Mendel explained: “The essence of a ring is not the gold, but rather the empty space inside.  If you want a successful marriage, you need to create an open space inside your heart, an open space to absorb another person, just as they are!  Not the person you want them to be, not the person you dreamed that they would be, but just as they are!  The empty space is everything…”

Marriage is about creating a space within ourselves, about stepping back from our completely self-absorbed way of living life, and valuing and respecting another person – as is! The individual must take himself out of the picture, remove the ‘me’, and allow the ‘us’ to appear.

The sad truth is that in most cases when a husband or wife is disappointed and frustrated with their spouse, it’s usually because their entire perspective on marriage is off. They are so entrenched in themselves and their own expectations that they cannot see the ‘us’ that is supposed to be at the forefront.

Marriage requires us to make space – to constrict ourselves, to limit the demands of the ego, to make room for each other.  This is the prerequisite for love!

When considering the exemptions for battle, the first two exemptions, a vineyard and a house, are self-centered. A man decides for himself whether he wants to go off to war.

But in the case of a newly married man, this choice between marriage and going to war is not his choice alone anymore! It’s no longer just about HIM!  There is another person in his life – an equally important person – and he must create space for her in his life!  What right does he have to go to war at her expense?

A man is not allowed to go to war – even for the extraordinarily holy purpose of fighting for the Jewish people – at his wife’s expense! This law sends a magnificent message about relationships and marriage.