The Torah Prohibition Against Blood and Hunting 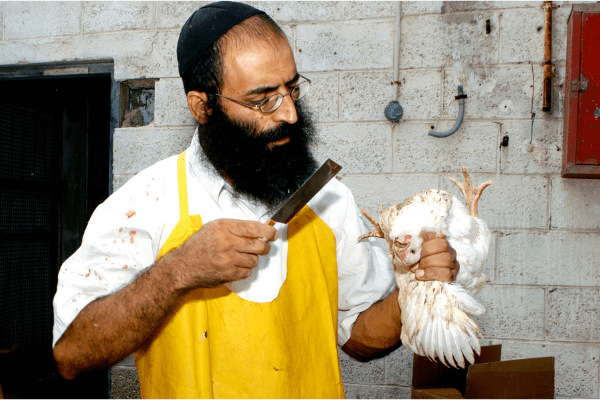 In Leviticus, God prohibits Israel from eating blood in the strictest terms. This prohibition also includes hunting and eating from the carcass of a dead animal (Leviticus 17:10-16), and the punishment for one who violates this is karet. In fact, the prohibition against eating the blood of an animal applies to all of mankind, as expressed in Genesis to Noah and his sons (Genesis 9:4).

The Talmud explains that the Biblical prohibition is referring to the blood of cattle, beasts, and fowl, and prescribes the punishment of karet for the consumption of the minimum amount of the volume of an olive. The Torah states explicitly that blood for which one is liable is the lifeblood, i.e. “the blood with which the soul emerges”. This is the blood that first gushes out when the animal is mortally wounded. The blood which oozes out subsequently, or blood in the meat itself, is not prohibited by the Torah. However, this blood is forbidden by rabbinic law and must be removed before it can be consumed. This is usually accomplished through salting the meat.

In Moreh Nevuchim (Guide to the perplexed), the Rambam (Maimonides) explains the reason for the prohibition, stating that the ancient practice of eating the blood of animals was an integral part of demonolatry and other forms of idolatry.

The Ramban (Nachmanides) disagrees, explaining that blood represents or contains the life force, as it says “for the life of the flesh is in the blood” (Leviticus 17:11), and it is forbidden to incorporate another being’s life force. “The possessor of a soul may not consume another soul,” the Ramban explained. “Since all souls belong to God.”

Sefer HaChinuch explains that by consuming the life blood of an animal, a person can acquire animalistic traits.

Blood of all other creatures, including fish, locusts, and human blood, is permitted according to the rabbinical interpretations of biblical law. A blood spot in an egg yolk renders the egg unfit to eat, though not because of the prohibition against blood. Rather, it indicates the formation of an embryo inside the egg, and embryos are forbidden.

It may seem bizarre but human blood is Biblically permitted. It is forbidden by rabbinic decree because it looks just like animal blood and it may seem to an onlooker that animal blood is being eaten. However, it is permitted to swallow the blood from one’s bleeding tooth and suck one’s bleeding finger, but should a piece of food be stained by one’s own blood, it may not be eaten. Similarly, the blood of fish collected in a vessel is forbidden.

The prohibition of blood is confined to its consumption; it is, however, permitted for other uses.

Ironically, despite this strict prohibition and Jewish aversion to blood, anti-Semites have historically accused Jews of murdering Christian children to use their blood in the making of matzoh.

Hunting is explicitly forbidden though there are hunters in the Bible. The first hunter mentioned in the Bible was Nimrod, who was described as a “mighty hunter” (Genesis 10:9). The midrash describes Nimrod as a hunter of people, ensnaring them into sin and responsible for the Tower of Babel.

The next hunter described is Esau (Genesis 25:27), as opposed to Jacob who “was a mild man who stayed in camp”.  Oddly enough, it was Esau’s skill as a hunter that endeared him to his father (Genesis 25:28), a skill Jacob had to falsify in order to steal the blessing (Genesis 27:4).

Hunting is also precluded by Torah law which requires all animals to be ritually slaughtered in a process known as shechita (slaughter by cutting the trachea, esophagus, carotid artery and jugular vein). An animal killed in another way is not considered kosher. A fatal arrow shot would therefore render the animal a treifah (a torn or fatally wounded animal) and therefore be forbidden to be eaten.