The Still Small Voice of the Shofar 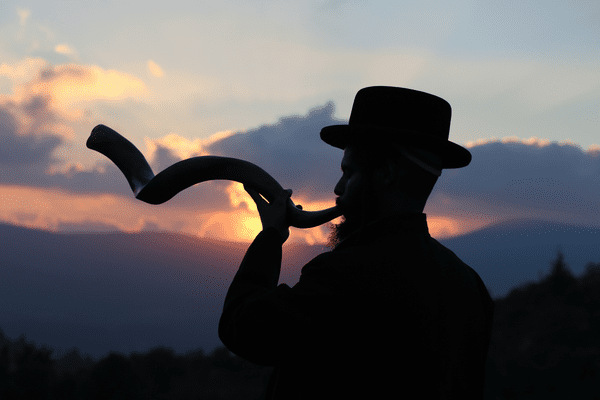 Blow the shofar on the new moon, on the full moon for our feast day.

I had the remarkable merit of learning in Yeshiva (school for Torah study) with Barya Shachter, now a truly inspirational leader of a spiritual community. He is the son of Rabbi Zalman Shachter-Shalomi, the dynamic founder of the Jewish Renewal Movement. One time, Barya led an intense communal Birkat Hamazon (Grace after Meals). My wife asked him if his father blessed Birkat Hamazon like that.

“When my father says a blessing over the meal, the food joins in,” Barya answered.

He then told a story illustrating the remarkable life of his father. His father was a young man during the Holocaust. He was fortunate not to be sent to a concentration camp. Instead, he and his father were sent to serve as slave labor on a farm. They had always been meticulous in their Torah observance, and as Rosh Hashana (Jewish New Year) approached, they worried about how they would manage to fulfill the commandment to blow the shofar (ram’s horn) that year. Just before Rosh Hashanah, they managed to procure two horns from a ram that had died. The horns had to be hollowed out, but they only had a couple of nails and one night to work. The task was indeed arduous, scraping away at the inside of the horns. They both knew that one slip could poke a hole through the horn, rendering it unfit for use. Side by side, they labored away through the night. Just before dawn, the young Zalman succeeded. He turned to his father and told him there was no need for him to continue since they now had their kosher shofar for Rosh Hashana.

“I poked a hole through my shofar almost immediately after we first began last night,” his father informed him. “But I kept working so that you wouldn’t feel overly pressured.”

This story is incredible on a number of levels. It gave me insight into the deep Torah roots of a young man I respect and love. It teaches an important lesson in human psychology. And it also serves as just one example of how Jews over the years have worked hard and put their lives in danger just to fulfill this sacred and precious command.

The shofar has been a part of the Jews’ connection to God since it was first sounded at Mount Sinai. Well before that, the imagery of the shofar was born when a ram became trapped in the bushes by its horns, waiting to replace Isaac on the altar.

The shofar is blown every day of the Hebrew month of Elul, leading up to Rosh Hashana. On Rosh Hashana itself, also known as Yom Teruah, the day of the shofar blast, the ram’s horn is blown one hundred times. And the Ten Days of Repentance culminate in one great blast blown at the end of Yom Kippur (Day of Atonement). This intense period of teshuva (repentance, return) is focused on the shofar.

But do we truly understand this primal instrument?

On one level, Jews view the shofar as they do every other mitzvah (commandment); the Torah commands us to do it, so we do so, without questions and without reservations. This is the Jewish concept of naaseh v’nishma (we will do and we will hear), which the Jews enthusiastically declared at Mount Sinai when they vowed to keep the commandments unconditionally. The Torah commands us to blow the shofar on Rosh Hashana, and so we do.

But implicit in the act of listening to the shofar is something more. The shofar is the most basic and primal of musical instruments. The sound of the shofar is essentially the breath of man channeled through an organic amplifier. It is a primal, wordless, cry. While concentrating on the sound of the shofar, the penitent creates an inner silence that allows for a deeper level of introspection, a chance to hear our own personal “still small voice”. The piercing note of the shofar passes through our bodies, taking us to the place of repentance.

The Talmud prohibits sounding a shofar in a pit or any location that generates an echo. This is based on the axiom that “two voices cannot be heard.” Focusing on the simple voice of the shofar allows us to focus on the holy day dedicated to memory and introspection. By focusing on the voice of the shofar, the distracting inner dialogue is silenced. We reset our entire system. We quiet things down. We, ourselves, become silent.

The shofar becomes our voice; primal and transcending language and words. The sofar is a wordless cry to God; the coronation of the King, and a cry to take us back home.