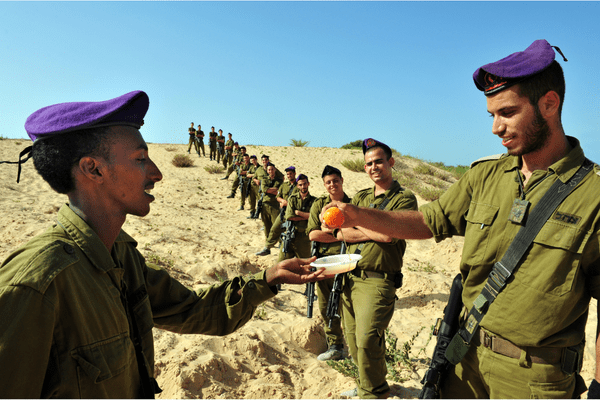 When I first started my journey toward “being religious”, I was concerned about the prayers on Rosh Hashana. During the rest of the year, we bow at the waist while reciting the Aleinu prayer. But on Rosh Hashana, we prostrate ourselves fully, lying on our stomachs. The reason we do this on Rosh Hashana is that this is the day we declare with all our hearts that God is king. But as a proud American, it was ingrained in my mind that we bow before no one. America was founded in a revolt against a king.

So I grew more nervous as the prayers advanced toward the Aleinu. But the most amazing thing happened. As I dropped to the floor, I became happy. I was actually laughing. Surprised, I wondered what the source of this unexpected joy was.

The question became even more compelling when I recalled the special High Holiday prayer, known as unetaneh tokef, that we had recited earlier in the service:

“Let us now relate the power of the day’s holiness, for it is awesome and frightening. On it Your Kingship will be exalted; Your throne will be firmed with kindness and You will sit upon it in truth. It is true that You alone are the One Who judges, proves, knows, and bears witness; Who writes and seals; Who remembers all that was forgotten. You will open the Book of Chronicles-it will read itself, and everyone’s signature is in it. The great shofar will be sounded, and a still, thin sound will be heard. Angels will hasten, a trembling and terror will seize them-and they will say, ‘Behold, it is the Day of Judgment…All mankind will pass before You like members of the flock…and You shall apportion the fixed needs of all Your creatures and inscribe their verdict.” (From the Rosh Hashanah liturgy; Artscroll Machzor.)

The intense emotions of trepidation and fear evoked by this prayer seemed to be the antithesis of the happy feelings I felt when bowing down to the floor.

How could it be that I was having all of these contradictory emotions run through me at the same time? Is Rosh Hashana a day of joy, or is it a day of fear?

The day of Rosh Hashana is supposed to be divided between standing in solemn prayer before God and enjoying festive holiday meals. The morning is spent in the synagogue, but we also spend time rejoicing with our families and friends. How can one day have both aspects?

Years later, I continued my studies in a Yeshiva (school for Torah study) that followed the traditions of the Breslov Hassidim. On Rosh Hashana, there is a tradition that after the preliminary prayers, the prayer leader sings out one word: HaMelech (the King). I was shocked to see that the rabbi sang this loudly, practically shouting. And as he did, the congregation began to clap, giving an actual round of applause. As I joined in, I realized we were all laughing and I again felt how strange the whole experience was. There we were, standing before God on the Day of Judgment, declaring God to be King, and laughing.

And then it hit me. We were laughing precisely because we were standing before THE King. All my life I had served “false kings”; money, passion, good grades, and horrible politicians. Finally, I could bow down to a true king in full obeisance. True, we were being judged. But we were being judged by a benevolent and kind Judge. God is not a fallible human being, subject to his own perceptions, biases and moods.

This is the source of the dual nature of Rosh Hashana. The aspect of judgment makes us tremble with fear – not because we are afraid of God, but because we are afraid that He will find that our actions over the previous year were lacking and inadequate. But at the same time we rejoice, since there is nothing more joyous than greeting the One True King.

This duality was expressed by King David in the Book of Psalms:

The Hebrew word that is translated as ‘tremble’ is גִילוּ (gilu), which literally means to be glad or to exult. What King David is saying that we should “rejoice with fright.” This is the experience of Rosh Hashana.

The joyousness of the day comes from the very fact that we recognize that God is our king. Were we to be coronating a king of flesh and blood, if we were standing in front of a human king in judgment, we would have good reason to fear and only fear. But when standing before God on the day we coronate Him as the King over all of creation, we rejoice even as we tremble.