The Parochet Curtain: Separating Between the Holy and Holy of Holies 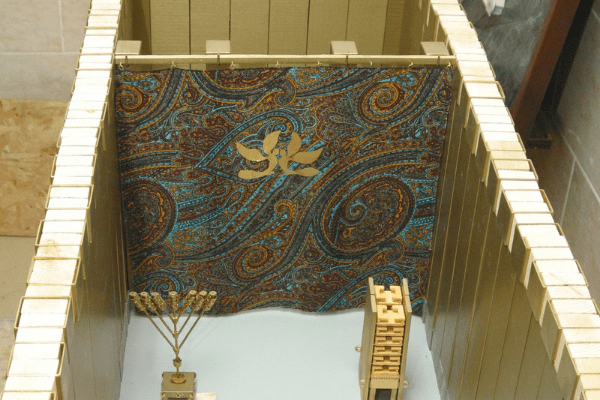 You shall make a curtain of blue, purple, and crimson yarns, and fine twisted linen; it shall have a design of cherubim worked into it.

In the Tabernacle, and later, in the Temples in Jerusalem, a curtain, called a parochet, separated the “Holy” from the “Holy of Holies.” The only person who passed through this curtain was the Kohen Gadol (high priest) on Yom Kippur, the Day of Atonement.

In order to enter the Holy of Holies, the Kohen Gadol had to first pass through the gate to the outer court of the Tabernacle, then through the door leading to the holy section inside the tent of the Tabernacle, and then he would arrive at the parochet. All three entrances were made of the same material: a fine white woven linen with blue (techelet), purple (argaman), and scarlet (tola’at shani) threads running through the material. All three dyes were expensive: techelet, a deep blue extracted from murex snails, argaman a unique purple reserved for royalty and the Temple, and tolaat shani, a crimson dye extracted from a tiny worm. 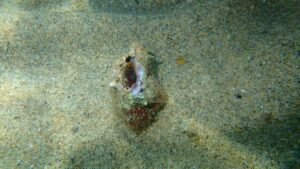 The curtain separating the camp from the courtyard of the Tabernacle was supported by four pillars set in bronze sockets. The Israelites could only enter when they brought their sacrifice to the gate as an offering for God upon the bronze altar.

The second curtain separated the people in the outer court of the Tabernacle from the area designated as holy. Only priests were permitted to enter into the Holy Place after they had made the proper sacrifice at the altar and washed at the bronze laver.

As noted above, the parochet separated the Holy area from the Holy of Holies. Woven into this veil, guarding the entrance to the Holy of Holies, were figures of cherubim, winged figures, like the two figures which adorned the lid of the Ark of the Covenant. 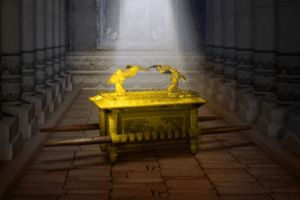 3D illustration of the Ark of the Covenant with cherubim on top (Shutterstock.com)

Rashi (Exodus 26:31) explains the reason for the separation, noting that parochet refers to a “curtain” that separates between a king and his people.

When Solomon built the Temple in Jerusalem, this separation became largely symbolic, as the Holy of Holies was accessed by passing through a double wall that separated it from the outer Holy area. He nonetheless created a new parochet for the Temple (II Chronicles 3:14). Rashi (Menachot 98a) explains that even though it was not necessary to separate the Holy of Holies with a curtain, the curtain was used as a sign of modesty and respect for the Holy Ark which was kept in the Holy of Holies.

The Second Temple was larger than the first, and a wall large enough to separate the Holy from the Holy of Holies could not be constructed. As such, the parochet, now doubled in the same manner as the wall, became the only separation.

Though the Temple does not currently stand in Jerusalem, a symbolic representation of the parochet is still found in synagogues around the world. The ark in the synagogue, representing the Ark of the Covenant, contains the  Torah scrolls. The synagogue ark is covered by a curtain referred to as the parochet. 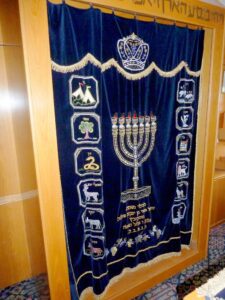