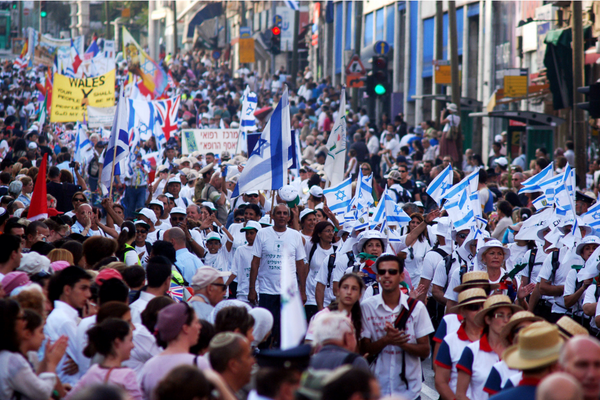 And Hashem shall be king over all the earth; in that day there shall be one Hashem with one name.

When I think about the High Holidays, I picture synagogues full of Jews, the men wrapped in snow-white prayer shawls swaying silently, the women praying fervently. They are Jewish holidays and the pinnacle of the Hebrew calendar. These are intensely Jewish experiences. But the holidays themselves have explicit universal elements. A verse from Zechariah expressing this is repeated several times in the Rosh Hashanah (Jewish New Year) and Yom Kippur (Day of Atonement) prayers:

And the LORD shall be king over all the earth; in that day there shall be one LORD with one name. Zechariah 14:9

On the most intense Jewish holidays, you would expect the prayers to focus on the Jews’ relationship with God. But, instead, the focus is on the end-of-days and the universal recognition of God.

Every Jewish child knows that Rosh Hashanah and Yom Kippur frame the ten-day period of repentance during which the Jews are judged by God. But the Talmud takes that even further, teaching that on Rosh Hashanah, the day that Man was created, every single human passes before God individually (Rosh Hashanah 18a).

On Rosh Hashanah, the Torah reading focuses on God hearing the prayers of Hagar and Ishmael (Gen. 21:17-18), neither of whom was part of the covenant with Abraham.

This is further emphasized by the haftarah (reading from the Prophets) read on Yom Kippur: the Book of Jonah. The book, read on the day when Jews fast in repentance, describes the successful repentance of the city of Nineveh, a metropolis of non-Jews.

Directly after Yom Kippur, Jews prepare to enter their sukkot, a temporary dwelling that represents the time when the nation of Israel dwelt in the desert, isolated with the shechina (God’s holy presence), for forty years. Yet the holiday of Sukkot (Feast of Tabernacles) is the most international Jewish holiday of the year. When the Temple stood in Jerusalem, all 70 nations would gather to offer sacrifices to the God of Israel. For this reason, 70 bulls were offered up during the course of the seven-day holiday. According to the Prophet Zechariah, this phenomenon is going to be intensified in the end-of-days.

All who survive of all those nations that came up against Yerushalayim (Jerusalem) shall make a pilgrimage year by year to bow low to the King lord of Hosts and to observe the festival of Sukkot. Zechariah 14:16

Rabbi Jonathan Sacks, the former Chief Rabbi of the United Hebrew Congregations of the Commonwealth, emphasized the universal aspect of the Torah by noting that the term baruch hashem (blessed is God’s name) was used by three people in the Torah: Noah, Eliezer, and Jethro. Not one of these three Biblical characters was part of the Abrahamic covenant.

Rabbi Sacks cited the Talmudic sage, Rabbi Akiva, who said (Mishnah Avot 3:14): “Beloved is humanity, for it was created in the image of God. Beloved is Israel, for they are called children of God.”

Though the Jewish people were chosen to represent God on earth, everyone is a child of God. When we stand in judgment on the anniversary of creation, all of God’s creations stand in judgment. When we are judged for rain on the holiday of Sukkot, all of mankind joins together in thanksgiving and prayer for rain.

Therefore, though these holidays are Jewish holidays, Jews focus on a universal acknowledgment of God.

Ironically, this will only happen when the Jews return to Israel as one nation. When the world sees the miracles of the Jewish people returning to a life of holiness in the Land, they will see all of God’s promises fulfilled. Once they are fulfilled, the world will recognize that God, the One behind those promises, is the King of the world.

With the final redemption and a return of the Jewish people to the Land of Israel will come a universal recognition of God. We eagerly await the fulfillment of these promises.