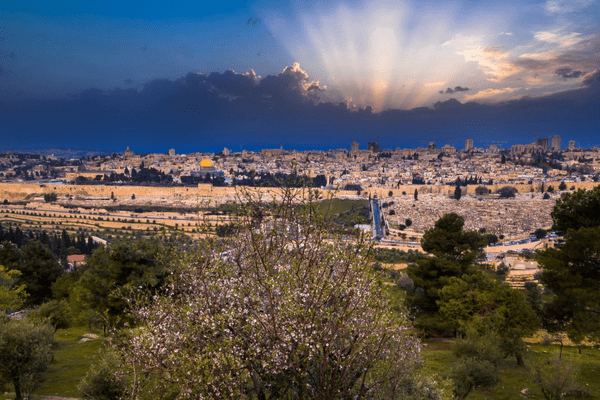 Deliverance is Hashem's; Your blessing be upon Your people! Selah.

Throughout our lives, either for reasons we create, or for reasons unbeknownst to us, we experience tragedies, feel pain and suffer.  Why?

This Jobian question disturbs us throughout our period of distress, and continues to torment us if and when that pain is translated into loss.  The prophet Jeremiah is famous for his cry of eicha, why?, which is the opening word of the Book of Lamentations, read on the Tisha B’Av, the saddest day in Jewish history.

King David also confronts this subject in his third psalm:

This penetrating line is the focus of his song.

How does David respond to this question? How does he deal with his suffering?

Many of David’s psalms, expressing both his darkest fears and his greatest expressions of gratitude to God, were written during the tumultuous times in his life. As punishment for sinning with Bathsheba, David is warned that Hashem will “make a calamity rise against you from within your own house” (II Samuel 12:11).

Indeed, immediately following his sin with Bathsheba we read of David’s son, Amnon, raping David’s daughter from a different wife, Tamar.  Tamar’s brother Absalom comforts Tamar, but vows revenge on Amnon and ultimately kills him.  With the murder of the king’s son, Absalom is exiled.  David eventually takes him back but while in the king’s house, Absalom gains popularity and ultimately assumes the throne, overthrowing his father and forcing him to flee.

David finds himself driven out of his capital city by his own son. As he ascends the Mount of Olives crying and downtrodden (II Samuel 15:30), he turns to God in pain and suffering and calls out with this psalm.

The structure utilized in the psalm is very natural. It begins with David’s feelings of distress. The onslaught of his enemies, his suffering, and his fear of the future are the thoughts that are at the forefront of his mind and his poem. It is bad enough that his kingdom is being overthrown and that his daughter was raped and he was silent in reacting, but the fact that his beloved son Absalom was the mastermind behind it all makes all the more unbearable!

The second feeling David invokes here is crucial, possibly the most important component when relating to God in time of need.  “But You O Lord are a shield about me” (verse 4).  Amidst the suffering, before the regret, before the prayer for salvation, a calm, confident expression of faith in God is expressed.  It is God who will save David, despite his sins!  God raises up David’s head when all others attempt to lower it. Before you can ask God for salvation, you must honestly and truly acknowledge the Lord is our ultimate savior, always looking out for us despite the fact that sometimes he allows us to suffer.

David starts this section with the words “But you.”  The emphasis here is on God, his only protector and his saving grace.

How can David, who is well aware that what he sees transpiring before him is a punishment for his sins, confidently call out to God as his savior?  This is the true message of repentance that is hidden between the lines of the psalm. Though he is suffering for his sin, he knows through repentance his relationship with God remains as strong as it has always been. God continues to be our savior despite our mistakes and shortcomings, as long as we continue to want a relationship with Him.

The final stage emphasizes the extent to which David is sure of his method in restructuring his relationship with God.  After the first two stages of distress and complete trust in God, in the third stage the request comes forth in full force.

David asks God to rise and stand up against his enemies.  Passivity is unacceptable here.

In the absence of prophets and a direct line of communication with God, we can not possibly know with certainty the reason why we suffer. This psalm, however, presents us with David’s three-pronged response towards personal suffering.  The human side depicts first the anguish and the pain – it is OK to feel and acknowledge the suffering.  The spiritual side acknowledges complete faith in God who has saved us in the past and will bring salvation in the future.  Finally, the third section depicts the human, now endowed with spirituality, who strongly entreats God to rise up against his enemies and save him from his troubles.

The same David who sinned in the dark night, now rises on his road to repentance to again find the light of God, letting it shine radiantly upon him. Just God saved David, He will save us from our troubles and shower his light on us as well. Let it shine!