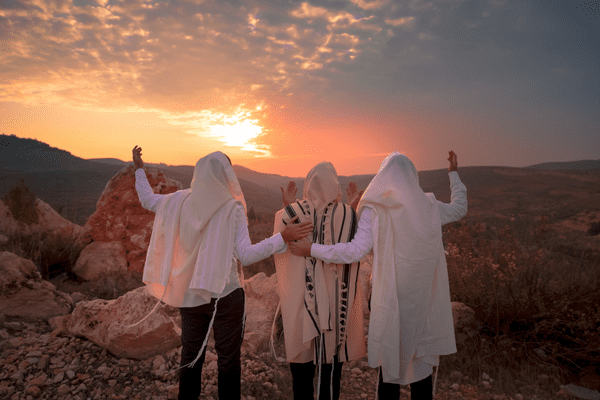 Rabbi Sacks concluded the story as follows: “It’s a lovely story. And of course if you read the psalm in its entirety, you’ll see exactly why it should be said every day. Because no other psalm breathes so beautifully the quiet confidence of faith.”

We don’t read Psalm 27 every day of the year, but we do read it twice daily for the entire month of Elul and throughout the High Holiday season.

It is always good to recite psalms, and, as the British judge said, Psalm 27 is so beautiful that it should be read every day. But why is it specifically prescribed in the month of Elul? And twice a day!? Isn’t once a day enough?

Psalm 27 is a remarkable psalm that cuts straight to the human experience. Rabbi Amnon Bazak explains that in this Psalm, King David describes three different states of faith: Joy and complete trust in God; fear and the weakening of that trust; and difficulty and crisis, when we feel totally alone facing our enemies.

The Psalm’s beauty lies in King David expressing his faith in God no matter his emotional state, and it is this idea that we should take to heart from reading this Psalm.

We should always be expressing our faith in God. During the good times, we know that God is behind it all. When we are filled with doubts, we pour out our hearts to God in prayer and supplication. In times of trouble, we maintain our faith that God will get us out of the suffering and show us His goodness in “the land of living” (verse 13, The Israel Bible p. 1502).

Our moods also go through different stages when preparing for judgment. This is especially true during the month of Elul, as we undergo a process of self-reflection and repentance in preparation for Rosh Hashanah, the Day of Judgment. On Rosh Hashanah, all of humanity passes before God like a flock of sheep. God issues a decree about each person’s year – who will live, who will die, who will have plenty, and who will lack.

On the one hand, the month of Elul fills us with fear of judgment. Yet we learn from King David to maintain our faith that God’s judgment will be good and true. Along with our fear and desperate request – “Do not hide Your face from me” (Psalm 27:9 The Israel Bible p. 1502) – we also know that “Hashem (God) is the stronghold of my life, whom should I dread?” (Psalm 27:1, The Israel Bible p. 1501)

So why do we recite this psalm twice daily, in the morning and night?

Morning and night express two different states of faith. Morning is full of light when everything is visible; I have no questions or doubts because I can see clearly. This is faith in the good times.

Night is a time of darkness. It’s a time when nothing is clear and everything is potentially dangerous. The only way you could make it through the darkness is by remembering what things looked like in the light. This is having faith in the hard times.

Reciting Psalm 27 in both the morning and night connects us to what King David is trying to communicate – have faith at all times, no matter the situation.

May we all have a meaningful month of Elul, and may we all be blessed with a good judgment this Rosh Hashanah.