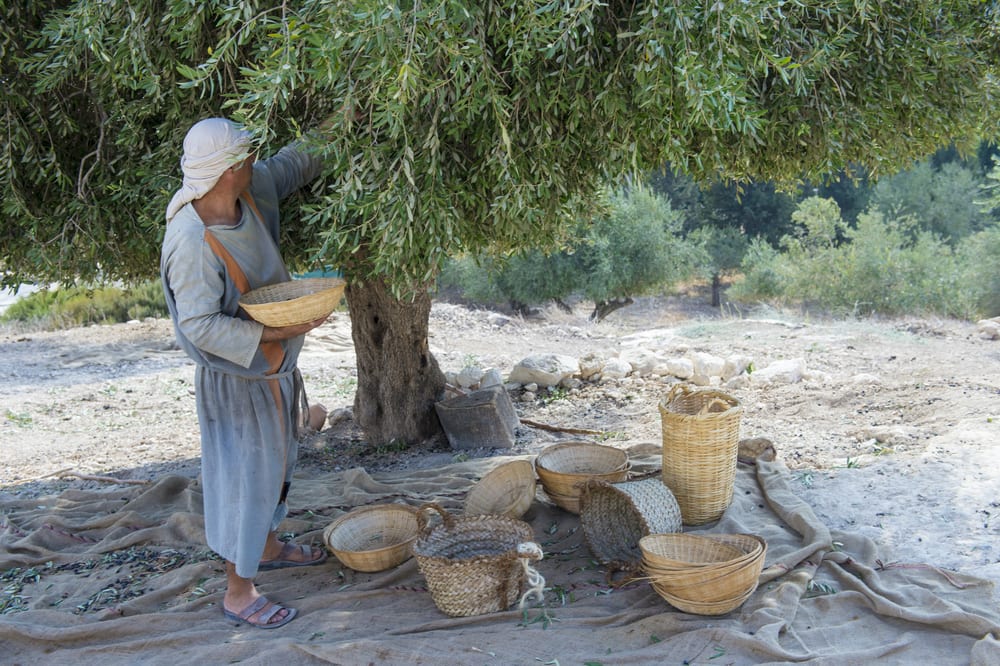 ❝But I am like a thriving olive tree in Hashem‘s house; I trust in the faithfulness of Hashem forever and ever❞  Psalms 52:10

an olive tree being harvested by a farmer in Nazareth, Israel (Shutterstock)

When the Children of Israel returned to the Promised Land, God’s blessings were expressed via the fruits and grains that were special to the land:

“A land of wheat and barley, of vines, figs, and pomegranates, a land of olive trees and honey (Deuteronomy 8:8).“

The fruits from these seven species were the only acceptable plant offerings in the Temple and their first fruits were brought to be eaten in Jerusalem. Today, people generally think of olives as being eaten whole but the main purpose of the fruit of the olive tree in Biblical times was its oil. For use in the Temple, this was especially true. In the time of the Temples, there were both animal and grain offerings. The grain offering (often translated as “meal offering”) is referred to in the Bible as minhah (מִנְחָה), which means “gift” and is an offering of thanks. This meal offering may only consist of fine flour, olive oil, salt and incense, usually frankincense.

Additionally, large amounts of the highest quality olive oil were used in the menorah.  Olive oil was also used to anoint the High Priests and kings as well as for the consecration of the articles of the Tabernacle. The Hebrew word Mashiach (Messiah) literally means “the anointed one.” In addition, it is said that the Mashiach will arrive from the Mount of Olives in Jerusalem.

For ceremonial oil used in The Temple, the Beit Hamikdash, called ‘Alfa Oil,’ only olives picked by hand were allowed because using instruments harms the fruit and can start the fermentation process prematurely. The pressing process cannot use any heat. Normally, olive oil is made by crushing the olives and then pressing them. As per the Biblical commandment, olive oil for use in the menorah is made by smashing the olives by hand and then allowing the oil to drip for several days. This produces a very small quantity of oil, only about two percent of the volume of the olives as compared to 20 percent by pressing. But the method described in the Bible produces oil that is vastly superior to that produced by any other method. As much as possible, the ritual purity of the olives is preserved. As soon as the olives are pounded, they become open to impurity.

Burning the oil in the Temple was considered a sacrifice in every respect, and does not require an actual Temple building to house it. The Biblical commandment could be fulfilled today by placing the Menorah on the Temple Mount, filling it with the oil that has been prepared, and having it lit by a Kohen (a Jewish man from the priestly caste).

Ideally, the olive harvest begins immediately following Sukkot (the Feast of Tabernacles) and continues until Hanukkah, the festival of oil.

Five years ago, the Sanhedrin began planting trees, including several olive trees, in preparation for the needs of the Third Temple and the first fruits of their labor were harvested in 2020. The five year delay was necessary as for the first three years of their growth, grapevines or fruit trees planted in Israel are categorized as orla (ערלה, literally ‘uncircumcised’) and it is prohibited to eat the fruit. When the Temple stood, the fruit of the fourth year was considered neta revai (נטע רבעי) and had to be brought to be eaten in Jerusalem.

“When you enter the land and plant any tree for food, you shall regard its fruit as forbidden. Three years it shall be forbidden for you, not to be eaten. In the fourth year all its fruit shall be set aside for jubilation before Hashem; and only in the fifth year may you use its fruit—that its yield to you may be increased: I Hashem am your God (Leviticus 19:23-25).”

Fruit that is grown in the fifth year was permitted to be eaten and used in the normal manner. This commandment is still observed in Israel today even though there is no Temple standing in Jerusalem.

On Israel’s national symbol, the menorah (seven-branched candelabra) is flanked on either side by olive branches. Olive oil is such a powerful symbol in the collective unconscious of Israel that the President’s residence in Jerusalem has an orchard of 60 trees. The olives are harvested and pressed, and the bottled oil is given to the President’s guests including many heads of state.