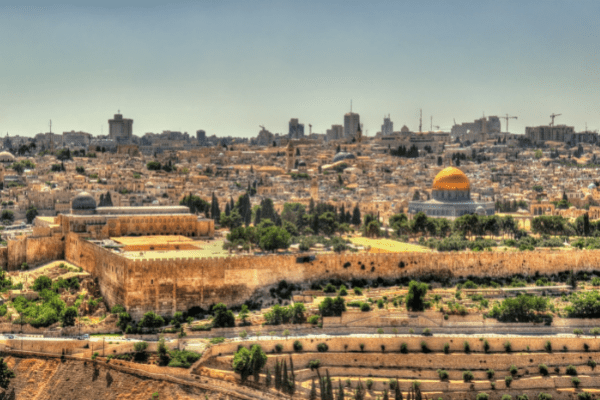 Then he explained to me as follows: “This is the word of Hashem to Zerubavel: Not by might, nor by power, but by My spirit—said the lord of Hosts.

Going up to the Temple Mount is, for me, an exhilarating and spiritually uplifting experience. I sense the holiness, the ineffable power of this holy site. I close my eyes, and I can see my forefathers and foremothers walking in this very place, joyfully approaching the Temple courtyard in anticipation. I can almost hear the beautiful singing of the Levite choir, music so powerful it would move the people to tears.

But then I open my eyes, and I’m brought back to the pain and brokenness of our time. Muslims currently control the Temple Mount, and they do everything in their power to mar the experience of Jews and Christians who wish to pray there. Though Israel miraculously liberated the old city of Jerusalem in the 1967 Six Day War, our holiest site remains in the hands of those who hate us.

As I stand on the Temple Mount, my emotions swirling, I wonder: what must we do to bring the Third Temple? Must Israel resort to another war? Must more blood be shed to rebuild God’s house of prayer for all nations in the city of peace?

Perhaps there is another way.

The prophet Zechariah, in this week’s Haftorah (a selection from the Prophets that is thematically linked to the weekly Torah reading), shows us a different way forward.

Zechariah, one of the last Biblical prophets, lived during a complicated time similar to our own. Many Jews had returned from the darkness of exile with plans to rebuild the Temple in Jerusalem. Things were looking up; all of the necessary elements were in place for Israel to return to its former glory and Cyrus had even provided the funds to rebuild the Temple. But at the same time, the people were beset by troubles. Many enemies sought to prevent the building of the Temple, false prophets abounded, and many of the people were intermarried with non-Jews.

An angel appeared to Zechariah and explained to him the missing element:

“This is the word of Hashem to Zerubavel: Not by might, nor by power, but by My spirit—said the lord of Hosts. Zechariah 4:6

Indeed, it was “not through armies and not through might” that the Temple was built and maintained, but rather the spirit of G‑d that enabled the building and maintenance of the Divine service. Although there were those who tried to put obstacles in the way of the building, these were quickly put at bay: “Whoever you are, O great mountain in the path of Zerubavel, turn into level ground!” (Zechariah 4:7)

Zechariah’s vision was not only meant for the people of his own generation, but also foretells the way in which the final redemption and the Messiah from the House of David will come – through spiritual purification and service to God. Yes, we must practically do everything in our power to rebuild the Temple. But the path to redemption will not be through violence or war, but by living with the spirit of God!