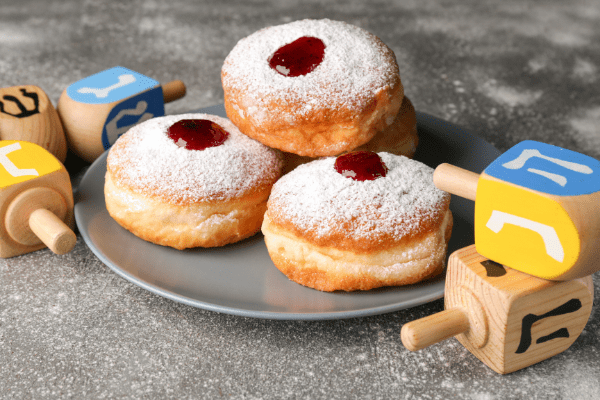 Aharon did so; he mounted the lamps at the front of the menorah, as Hashem had commanded Moshe.—

Everyone knows that Hanukkah is the Festival of Lights celebrated by the lighting of candles. But there is so much more to the holiday that makes it an eight-day family event.

Lighting the nine-branched menorah is not just a tradition. It is a mitzvah (commandment) commemorating the miracle which took place at the time of the rededication of the Temple, when a small flask of oil, enough for only one day, burned for eight consecutive days.

There is an old joke in which Jews tell each other, “They tried to wipe us out, they failed, we are still here, let’s eat.” Hanukkah is definitely in this category and food can be a big part of the celebratory atmosphere. As the holiday celebrates the miracle of the cruse of oil that lasted eight days, fried food plays a large role in the holiday.

There is a tradition to eat dairy after lighting the candles to honor the role Judith played in the holiday. Judith was the daughter of Johanan, the high priest, father of the Hasmonean family. The town of Bethulia in Judea came under siege by Holofernes, a Syrian-Greek general notorious for his cruelty in suppressing rebellions. Judith, a young and beautiful widow, went out to the Greek camp. She plied Holofernes with dairy food and wine until he became drunk and drowsy. When he fell asleep, Judith killed him, cutting off his head. The men of the town carried out a surprise attack, conquering the leaderless enemy.

In honor of Judith, dairy is eaten. There is also a custom for women to refrain from work for at least half an hour after lighting the candles.

The earliest mention of eating donuts on Hanukkah seems to have been made by Rabbi Maimon ben Joseph (born c.1110), father of Maimonides, who wrote:

“[People] shouldn’t be lenient regarding any custom, even the lightest of customs. And one is obligated to make every effort to prepare festivities and foods to publicize the miracle that G‑d did for us on those days [i.e., Chanukah]. It has become customary to make “sufganin,” known in Arabic as “alsfingh” . . . This is an ancient custom, because they are fried in oil, in remembrance of His blessing.”1

Traditionally deep-fried and filled with jelly, contemporary Israeli culture has taken the classic to new near-gourmet heights, filled with culinary delights such as dulce de leche or custard. 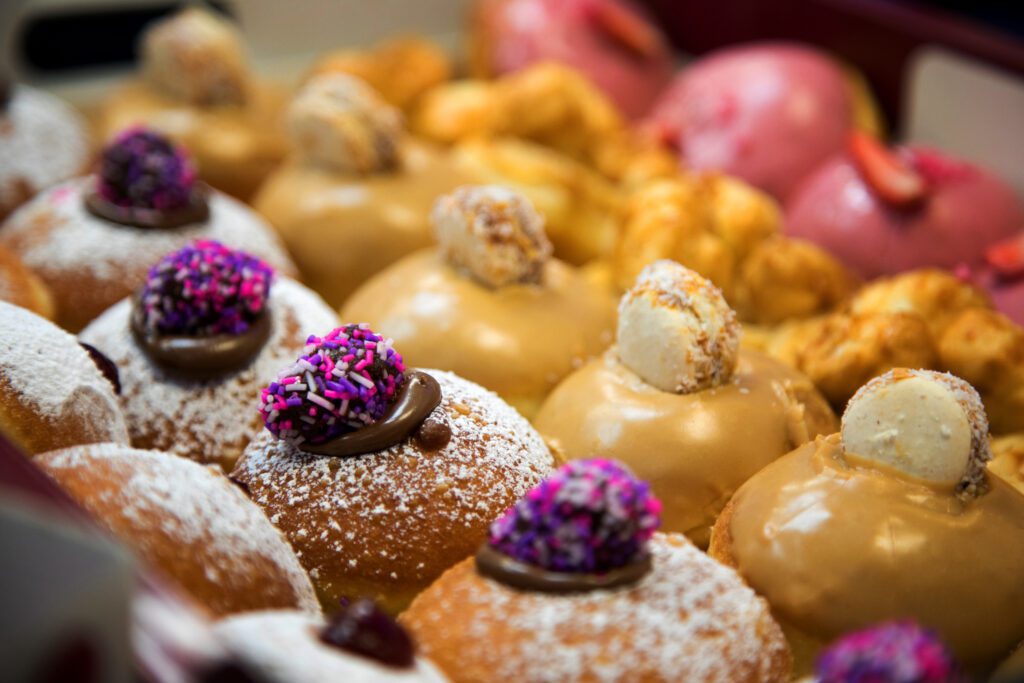 An additional reason for eating donuts is that the blessing recited after wheat products (except for bread) is al hamechiya and explicitly mentions the altar, which is a focus of the holiday.

Sfenj: Eaten by Moroccan Jews, Sfenj is a light, spongy ring of dough fried in oil. Sfenj is eaten plain, sprinkled with sugar, or soaked in honey.

Latkes (levivot in Hebrew): Ashkenazi Jews love to eat potato pancakes on Hanukkah, which are also fried in oil. They can be served with applesauce. Sephardi Jews eat fritas de prasa, a similar fried dish made with mashed potato and leek. 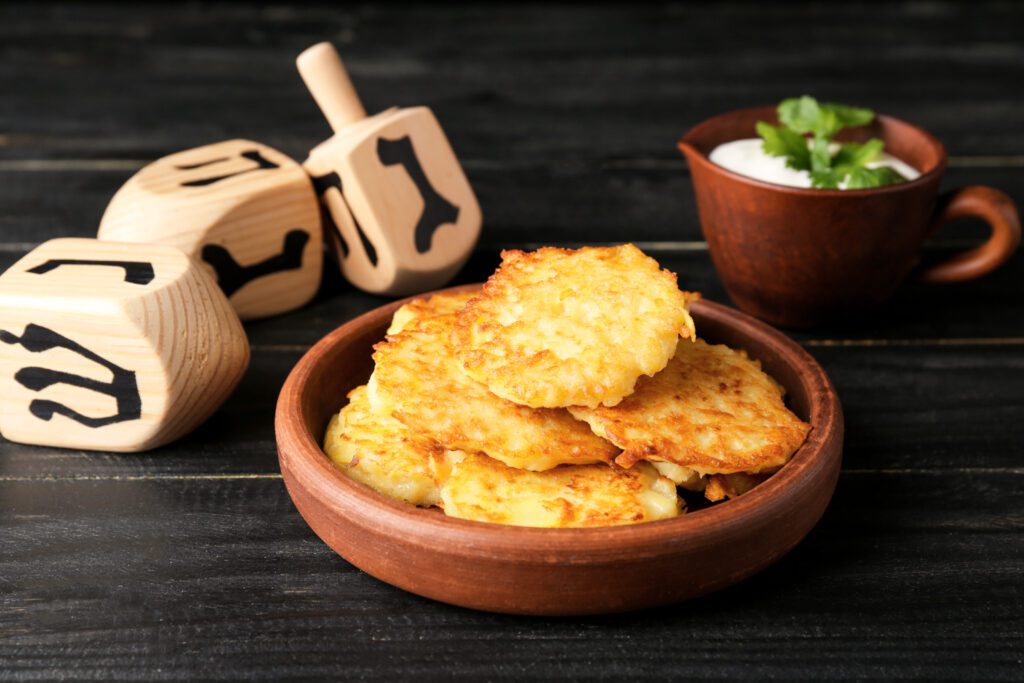 Lesser-known Hanukka foods:  Romanian Jews eat pasta latkes as a traditional Hanukkah dish, and Syrian Jews consume Kibbet Yatkeen, a dish made with pumpkin and bulgur wheat similar to latkes, as well as their own version of keftes de prasa spiced with allspice and cinnamon.

After lighting the candles, it is customary for the children (and many adults) to spin the dreidel. The dreidel, or sevivon in Hebrew, is a four-sided spinning top. The sides are imprinted with the Hebrew letters ‘nun’ (נ), ‘gimel’ (ג), ‘heh’ (ה), ‘peh’ (פ), which is an abbreviation for the Hebrew words נס גדול היה פה (Nes Gadol Haya Po, a great miracle happened here). Outside of Israel, the letters on the dreidel are ‘nun’ (נ), ‘gimel’ (ג), ‘heh’ (ה), ‘shin’ (ש) for the phrase Nes Gadol Haya Sham, “A great miracle happened there”. This refers to the miracle of the oil that took place in the Temple.

Dreidels can be quite elaborate and are a great craft project. 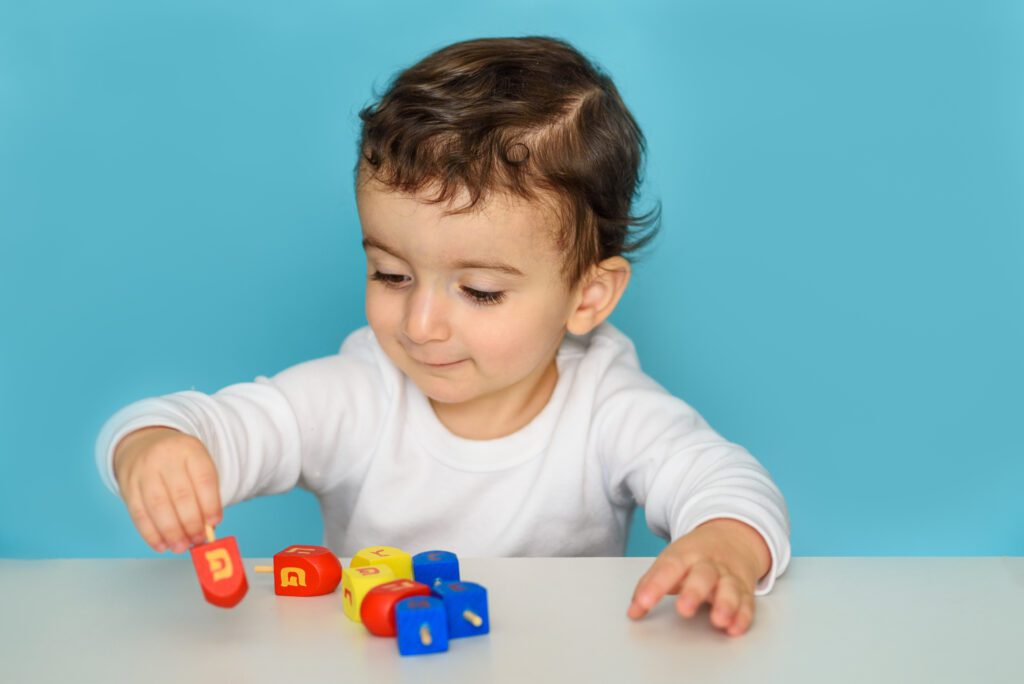 Giving gifts: Not a Hanukkah tradition

Hannukah falls in the winter and is frequently close to Christmas. As a result, many Jews have taken on the custom of giving gifts on Hanukkah. This custom does not have its roots in Jewish tradition.