How to light the Hanukkah candles 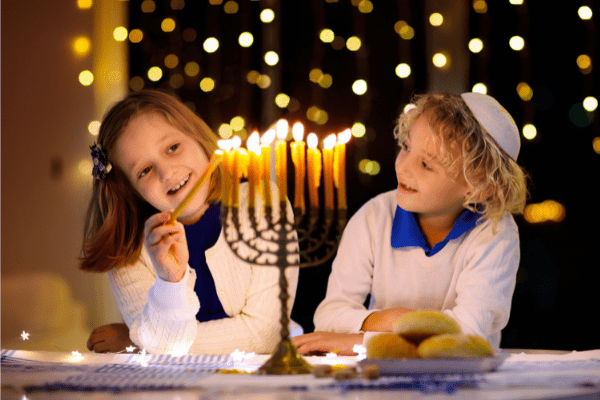 Speak to Aharon and say to him, “When you mount the lamps, let the seven lamps give light at the front of the menorah.”

Hanukkah is the eight-day holiday celebrating the recovery of Jerusalem and subsequent rededication of the Second Temple at the beginning of the Maccabean Revolt against the Seleucid Empire in the 2nd century BCE. The holiday begins on the evening of the 25th of Kislev. 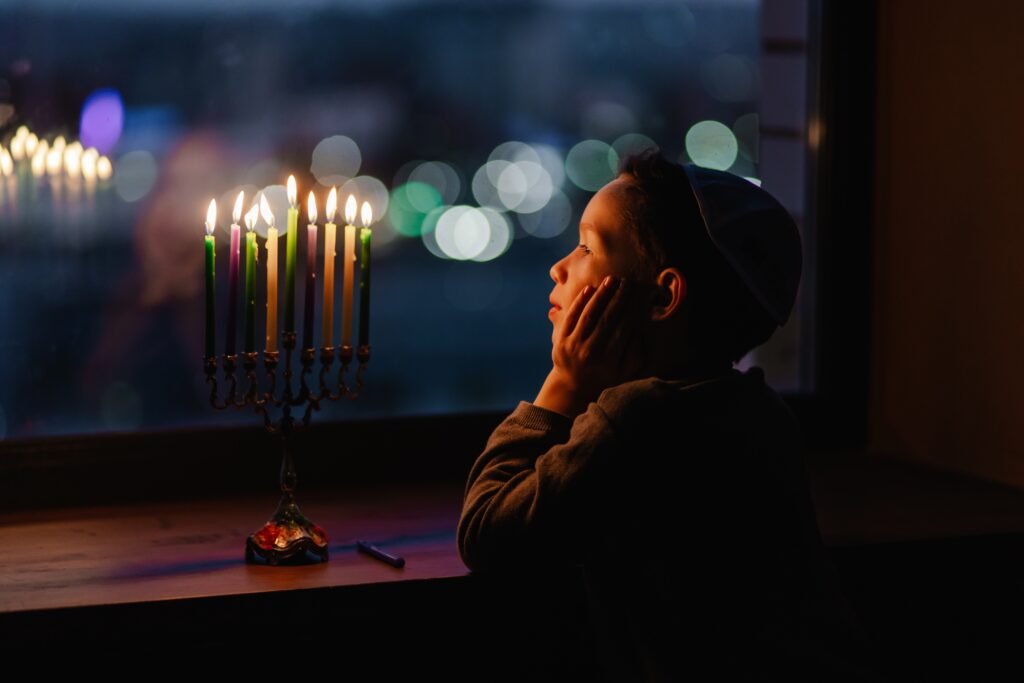 A Chanukiah has eight places to hold either candles or oil lights. The shamash, an extra candle lit every night, should be slightly separated from the other candles. Wax candles are common though olive oil is preferable, since the miracle of Hanukkah transpired with olive oil. Electric lights may be used without a blessing where actual flames are not possible.

The eight candles of the Chanukiah must be arranged in a straight line, not set in a semicircle. The Chanukiah’s lights should be level or on an even slant, not some randomly higher than others. 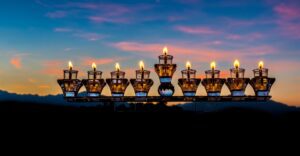 The lights of the Chanukiah should be able to burn for at least half an hour.

The maximum height of a Chanukiah is around 31 feet.

It is recommended to light the Chanukiah in a place where it is visible to the public as the purpose of the lights is to “publicize the miracle”. There is a custom to position the chanukiah by the entrance to one’s home, on the opposite side from the mezuzah, so that when one passes through the door, they are surrounded by mitzvot. 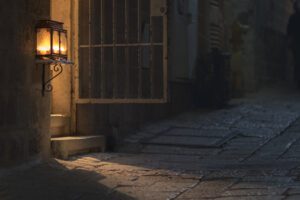 A candle or oil light is lit every night. It is the custom to light an additional candle every night, so that one is lit on the first night, two on the second, and so on. An extra candle (called the shamash) is lit to the side or above the other candles. The custom is to light the shamash first and to use it to light the other candles. It is forbidden to use the candles from the Chanukiah to light each other. This is to ensure that no benefit is derived from the actual lights of the Chanukiah as they may only be used for the glorification of the holiday.

When setting up the candles, the first candle should be placed to the extreme right of the Chanukiah, with the new candles being placed immediately to the left. When lighting, begin at the left (the most recently added candle) and continue to the right.

Among Ashkenazim, the custom is for every male member of the household (and in many families, girls as well) to light a full set of lights each night, while among Sephardim the prevalent custom is to have one set of lights for the entire household.

Normally, women are exempt from positive time-bound commandments. But the Talmud (Shabbat 23a) specifies that women are required to light Hanukkah candles as “they too were involved in the miracle.” Many women refrain from performing household chores during the first half-hour that the lights are burning, to honor the brave Jewish women who played a significant role in the Chanukah victory.

Many have the custom of to light at sundown, others light when the stars appear. Hassidic sects of Jews have a custom to light later.

Two blessings are recited before lighting the candles with a third added on the first night. The first is the blessing on performing the mitzvah of lighting the Chanukiah:

Blessed are You, LORD our God, King of the universe, Who has sanctified us with His commandments and commanded us to kindle the Hanukkah light[s].

The second blessing if for the miralce of Hanukkah:

Blessed are You, LORD our God, King of the universe, Who performed miracles for our ancestors in those days at this time.

The third blessing, recited only on the first night, is the blessing of Shehecheyanu, which thanks God for sustaining us until this moment:

Blessed are You, Lord, our God, King of the Universe, who has granted us life and sustained us, and allowed us [to] arrive at this Time.

After lighting the candles, the following hymn is recited:

We kindle these lights for the miracles and the wonders, for the redemption and the battles that you made for our forefathers, in those days at this season, through your holy priests. During all eight days of Hanukkah, these lights are sacred, and we are not permitted to make ordinary use of them except to look at them in order to express thanks and praise to Your great Name for Your miracles, Your wonders, and Your salvations.

After lighting the candles, many people then sing Maoz Tzur, Rock of Ages. Thought to be written in the 13th century during the Crusades, the hymn retells Jewish history in poetic form and celebrates deliverance from four ancient enemies: Pharaoh, Nebuchadnezzar, Haman and Antiochus.