Do Jews Have Horns? 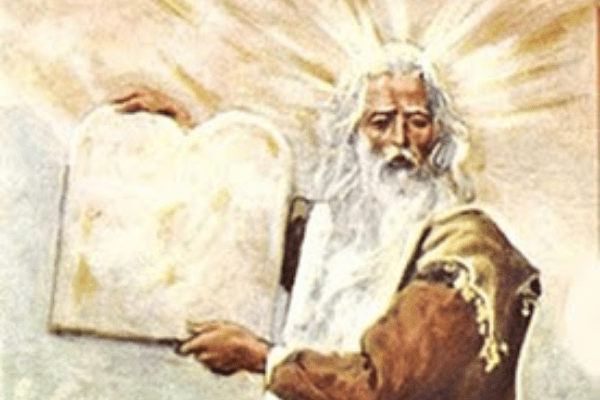 After coming down from Mount Sinai, Moses’ face was so radiant that he had to wear a mask when speaking with people:

And when Moshe had finished speaking with them, he put a veil over his face. Whenever Moshe went in before Hashem to speak with Him, he would leave the veil off until he came out; and when he came out and told the Israelites what he had been commanded, the Israelites would see how radiant the skin of Moshe‘ face was. Moshe would then put the veil back over his face until he went in to speak with Him. Exodus 34:33-35

The Biblical commentator known as Abarbanel noted that Moses veiled himself only after he had finished speaking with the people, implying that he did not wear the mask due to the people fearing his glowing countenance. The light was for holy purposes only, such as teaching Torah, so the mask was to preserve its sanctity and special status.

Alternatively, the radiance was generally unbearable to behold, but when the people were learning Torah they were able to gaze upon his holiness.

Yet another commentary suggests another purpose for the veil. As stated, after encountering God on Sinai Moses’ face glowed. So he wore the mask out of modesty, to hide the fact that he had merited such a transcendent experience.

It is interesting to note that neither the light nor the mask are mentioned after Moses’ first ascent to commune with God. That was before the people sinned with the golden calf so the people were able to withstand his heightened sanctity. After the sin, however, they were irreversibly tainted; detrimentally affected by sin. The people could no longer gaze upon Moses’ unblemished holiness so a veil was required. 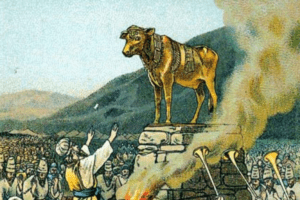 Sin of the Golden Calf

Some commentators note that the mask is never mentioned again, hinting that after descending from Sinai, the effects of meeting with God gradually faded and, after some time, the mask was no longer needed.

This was similar to the Midrashic description of Adam, the first man, who was made completely out of light. This means that Adam was so pure he had no difficulty discerning between truth and falsehood. However, after eating from the Tree of Knowledge of Good and Evil, his skin became opaque like the skin we have today. In other words, he lost his purity and with it the ability to easily discern between truth and falsehood.

The Midrash describes an unexpected source of the light. “Rabbi Yehuda ben Nachman stated in the name of Resh Lakish: There was some ink left over on the pen which wrote the Torah. He passed it over his head and this was responsible for the ‘beams of majesty.'”

The light emanating from Moses’ face is the source of a horrible misunderstanding. In the verses above, his face is described as being radiant. In Hebrew, the word used is karan (קָרַן), which shares a root with the Hebrew word for ‘horn,’ keren (קֶרֶן) and was mistranslated in the Latin translations of the Torah. In Christian art of the Middle Ages, Moses is depicted wearing horns, most notably in Michelangelo’s statue created from the 16th century. This led to the persistent anti-Semitic belief that all Jews had horns and were in league with the devil. 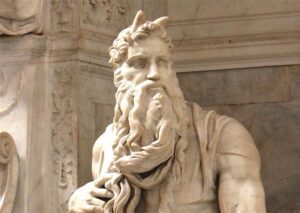