Did God Really Punish Moses For Hitting the Rock? 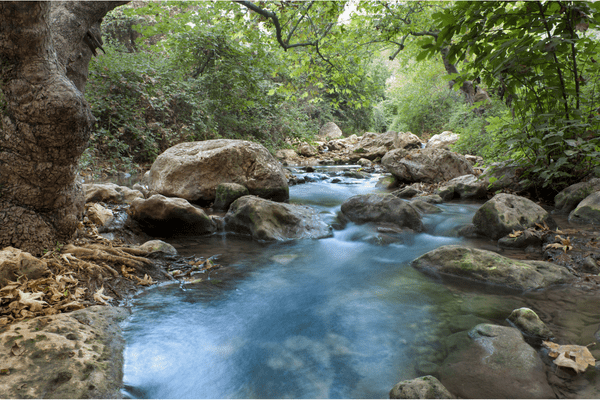 But Hashem said to Moshe and Aharon, “Because you did not trust Me enough to affirm My sanctity in the sight of B'nei Yisrael, therefore you shall not lead this congregation into the land that I have given them.”

A group of thirsty people complain bitterly to Moses, “Why did you bring us to the desert, to die??”

You and your brother Aaron take the rod and assemble the community, and before their very eyes order the rock to yield its water. Thus you shall produce water for them from the rock and provide drink for the congregation and their beasts. (Numbers 20:8)

Moses, however, loses his patience with the complainers, and instead of speaking to the rock, he hits it. Water gushes out of the rock and the people drink. But Moses gets a terrible punishment for not following God’s instructions. God tells Moses that he will not be leading the Children of Israel into the Promised Land. At that moment, Moses’ dream of entering the Land of Israel goes up in smoke.

How can it be that Moses, God’s faithful servant and the most humble man who ever lived, is punished so terribly for such a small mistake?

Forty years earlier, under similar circumstances, God told Moses to hit the rock. But now, for hitting the rock instead of speaking to the rock, Moses is punished?  Isn’t that unfair?

Grappling with this painful question, Rabbi Abraham Isaac Kook, the first Chief Rabbi of British-ruled Palestine, makes an important distinction. He notes that the generation of Jews who left Egypt and spent decades in the desert were very different from their children, the generation that entered the Land of Israel.

The generation that left Egypt – the people who experienced the miracles of the Exodus, the splitting of the sea, and the daily miracle of manna in the desert – they were the generation of miracles. Every day, they clearly saw the hand of God.

But the next generation, which entered the land of Israel, was very different. They lived as farmers and tradesmen in the Land, living mostly normal lives. They plowed, sowed, reaped and fought wars; God did not miraculously provide food or wage wars on their behalf. They were the generation without miracles.

Rabbi Kook compares the development of these two generations to the development of a child. A 6-month old baby learning to eat solid foods for the first time needs her parents to feed her – to literally bring the spoonful of mush to the baby’s mouth. But a 10-year old? If you’re still feeding your 10-year old child like this, you’re not doing her any favors!

Children at different ages of development require different things from their parents. As children mature, our expectations of them change; we expect more from our teenagers than our toddlers. Little by little, we help our children mature, grow and become more independent.

Rabbi Kook explains that the same was true in the development of the Jewish people. When they left Egypt, they were a child-like people:

I fell in love with Yisrael when he was still a child; And I have called [him] My son ever since Egypt (Hosea 11:1).

God loved the people, without question, but they were spiritually immature. They believed in God when they saw God openly – “And the people saw God, and they believed in Him.”  But the moment they couldn’t see God clearly, the moment they were faced with a difficult situation, they threw a fit! “It would have been better if we stayed in Egypt!”  Like children, they behaved well when they got what they wanted – a steady diet of miracles! And so this is exactly what the generation that left Egypt received – a constant flow of miracles!  God’s cloud of glory, constantly over the camp; food from the heavens, etc.

But the next generation was different. Spiritually, religiously and ethically, they were more mature than their parent’s generation; they were able to perceive God’s presence in nature, in “ordinary” life.  They no longer needed miracles to sustain their belief!

This brings us back to our original question: Why did God punish Moses so harshly for hitting the rock?

Some Bible commentators say that this “sin” of hitting the rock was really a pretext, an excuse for replacing Moses as the leader of the Jewish people. At first glance, this seems shocking; why would God want to replace the greatest leader the people had ever known?

Moses was a man of miracles. Think of the incredible number of miracles that God did through Moses’ hands!  He hit the rock, and water spurted out! This miracle-making made Moses the perfect leader for the generation that left Egypt; the ideal leader of the Jewish people in their infancy stage.

But for the next generation, the more spiritually mature people who entered the land of Israel, Moses was too great!  Looking at Moses, you automatically sensed God’s presence; his very existence, the fact that a human being could be so close to and in constant communication with God – this was itself a miracle!

But this wasn’t what the people needed in their next stage of spiritual development – they needed to connect with God through the day to day subtle miracles of ordinary life. And this is why God “punished” Moses and did not allow him to lead the nation into the land of Israel. Moses was simply too holy, too awesome and miraculous, to lead the Children of Israel during their next stage of their development in the Land.

The Jewish people are going through a similar process of development in our own time. During the years after World War II, God miraculously brought the Jewish people back to the Land of Israel from all over the world. He then performed incredible miracles during the wars of 1948 and 1967, when the State of Israel defeated the many enemy nations who tried to destroy it.

But though the redemption process began with open miracles, the people of Israel are meant to progress and grow to a point where they do not require open miracles to believe in God. The people of Israel must build a holy society and reveal God’s presence in the mundane moments of everyday life. May God’s people succeed in doing so!