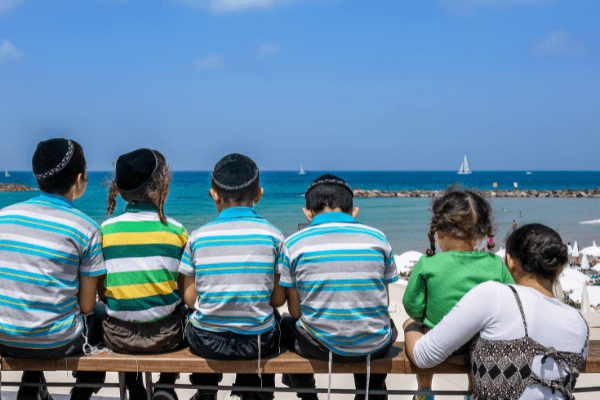 Seven days you shall eat unleavened bread; on the very first day you shall remove leaven from your houses, for whoever eats leavened bread from the first day to the seventh day, that person shall be cut off from Yisrael.

The holidays of Passover and Sukkot (Feat of Tabernacles) are seven days in Israel and eight days outside of Israel. The first day each and, on Passover, the last day (first two and last two outside of Israel) are full holidays during which, similar to Shabbat, specified labors are prohibited.

The intermediary days are referred to as chol hamoed (“weekdays [of] the festival” or, literally, “the secular part of the occasion”). These are days that are part of the holiday but are not full holidays in the sense that the specified labors are not prohibited. Chol hamoed manifests the aspect of sanctifying the mundane in order to create a bridge between heaven and earth.

The Talmud (Chagigah 18a) brings differing opinions as to whether work is prohibited on chol hamoed by the Torah or by rabbinic mandate. The Talmud concludes that the Torah strongly implies that it does not want us to do work on chol hamoed, and it may be a violation of the “spirit of the holiday” if work is done. Nevertheless, the Torah left it to the sages to create a prohibition together with its actual parameters.

The sages determined that though Shabbat-prohibited acts are permitted on the intermediary days, excessive activities are to be avoided. Many people refrain from working, doing laundry, writing, and other creative activities. The general principle is to do as little “skilled” work as possible, and as much holiday celebration as you can. This is based on a rabbinic principle called an asmachta.

According to Maimonides, it is forbidden to perform labor during chol hamoed so that these days will not be regarded as ordinary weekdays that are not endowed with holiness at all. There are generally five types of activities that are permitted on chol hamoed.

The days of chol hamoed are still considered holy, as the chagigah (holiday) sacrifice was brought on each of them. It is a considered praiseworthy to have a meal with bread (or matzah on Passover) as well as drink wine each day. It is also customary to wear nicer clothing, perhaps even holiday finery, during chol hamoed.

In Israel, chol hamoed is a time for family activities and outings. The days of chol hamoed also include the mitzvah (command) to be joyous and celebrate.

There are special prayers and Torah readings in the synagogue during chol hamoed, and in many communities men do not put on tefillin (phylacteries).