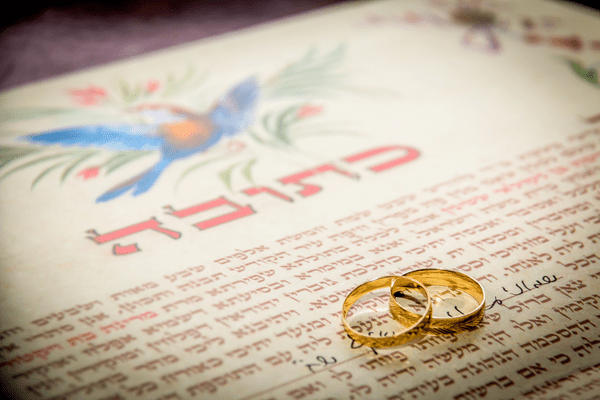 This is the ritual in cases of jealousy, when a woman goes astray while married to her husband and defiles herself,

The Book of Numbers (Chapter 5:11-31) describes the ritual of bitter water, given to a woman who acts in a way that causes her to be suspected of adultery. A woman is forced to drink the waters if she was warned by her husband regarding her relations with another specific man and subsequently secludes herself with that man in the presence of witnesses, but there are no witnesses of actual wrongdoing.

The woman is brought before the priests with her hair loosened. The husband is required to sacrifice one-tenth of an ephah of barley meal, unaccompanied by frankincense or oil, and this sacrifice is placed in her hands. The woman is then placed under oath before being given bitter waters to drink. The priest would say to the woman (Numbers 19-21):

If no man has lain with you and you have not gone astray to become defiled [to another] in place of your husband, then [you will] be absolved of these bitter, afflictive waters.

But if you have gone astray [and have lain with another] instead of your husband and have become defiled . . . these afflictive waters shall enter your innards, causing your belly to swell and your thigh to rupture.”

The woman would answer, “Amen, amen.”

The Torah (Numbers 5:17) explains that the water mixture was made from water and dust mixed in an earthenware vessel. The water was taken from the the wash-basin located in the Temple courtyard. Other sources explain that the priest would take some dust from the floor of the Tabernacle (or Temple) and put it into the water. The curses promised to a wayward woman were written on a parchment and the letters were washed in the water, erasing the letters. 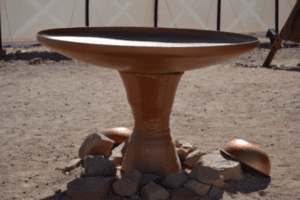 The copper laver at the model Tabernacle in Timna Park (Shutterstock.com)

The priest took the offering from the woman’s hand, waved it before God, and brought it to the altar. He would remove a handful of the offering and burn it upon the altar, and then give the water to the woman to drink.

If she was, indeed, guilty of adultery, the waters would lead to her demise. If not, they would bring her great blessing. If the woman was unharmed by the bitter water, she was regarded as innocent of the accusation, but if she was guilty of adultery, the Mishna states that “her belly swells first and then her thigh ruptures and she dies”

A woman had the right to refuse to take the test, even if she claimed innocence. However, she would then be required to receive a bill of divorce (a get) and forgo the monetary compensation usually provided to a divorcee.

The Rambam (Maimonides) adds that the partner in her adultery was also punished:

When she dies, the adulterer because of whom she was compelled to drink will also die, wherever he is located. The same phenomena, the swelling of the belly and the rupture of the thigh will also occur to him. All the above applies provided her husband never engaged in forbidden sexual relations in his life. If, however, her husband ever engaged in forbidden relations, the [bitter] waters do not check [the fidelity of] his wife.

The ritual of the bitter waters became impracticable with the destruction of the Temple, but even before that the Mishna states that the ritual was discontinued during the first century CE under the leadership of Yohanan ben Zakkai because the prevalent increase in immorality caused them to be ineffective. In fact, the entire body of rabbinic literature cites only one example of its implementation.

There are many levels of meaning to the ritual surrounding the suspected adulterer. The Talmud (Sotah 14b) explains that the offering of unadorned barley resembles animal food. “She acted like an animal; therefore her offering is of animal feed,” the Talmud states.

The Talmud (Jerusalem Talmud Sotah 3:4) further states that God compensates the woman who is innocent for her humiliation. If she was barren, she will now conceive; if she gave birth painfully, she will now give birth with ease; if she used to give birth to unattractive children, she will now give birth to beautiful children. According to the Talmud (Berachot 31b), this aspect of the bitter waters ritual was utilized by Chana, the mother of the prophet Samuel, who was barren. She threatened God that if He would not help her to conceive through her prayers she would make herself into a Sotah and force Him into helping her anyway (Berachot 31b).

The Talmud also notes that the verses erased from the parchment in the ritual contain the ineffable name of God. It is normally forbidden to erase this name of God, but the Talmud (Chullin 141a) states that so valuable is peace between a husband and wife that even erasing the name of God is permitted to achieve this.