Are twins double the trouble in the Bible? 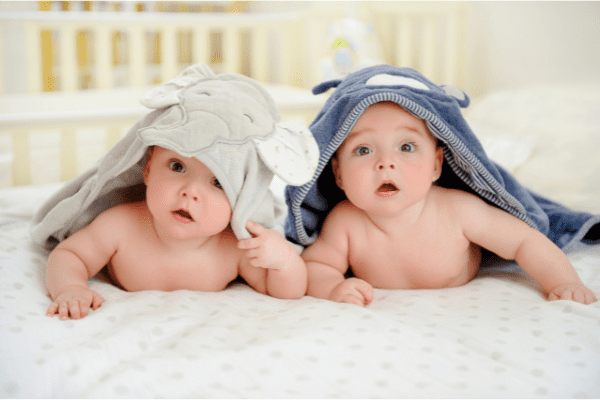 When the time came for her to give birth, there were twins in her womb!

The narrative of Joseph’s descent into Egypt is put aside for one chapter as the Torah relates the unusual story of the levirate marriage between Judah and his daughter-in-law Tamar. This unusual union resulted in twins and, similar to Jacob and Esau, the twins were vying in the womb for the rights of the firstborn. Unlike Esau and Jacob, the contest was not in the heel (hence the name ‘Jacob’) but in the hand. When Tamar went into labor, one of the babies was so insistent on being first that he sent forth his hand out of the womb. In order to determine which child was the first to enter the world, a red thread was tied around his wrist before he retracted it back into the womb.

It is interesting to note that the tactic of tying a red thread to signify primary status was incorporated into the laws of the first fruits (bikkurim). The Mishna describes how when a farmer saw the first figs, grapes or pomegranates that ripened, he would tie a scarlet thread around them and say, “Behold these are bikkurim,” thus devoting the first fruits to God. 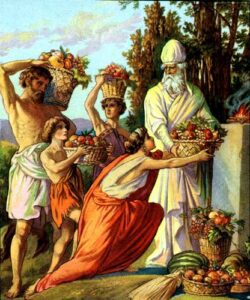 The Bible only explicitly describes two sets of twins, Jacob and Esau born to Rebecca and Isaac, and Perez and Zerah born to Judah and Tamar. There are several distinct differences between the twin birth of Rebecca and the twin birth of Tamar. Rebecca’s labor was heralded by the Torah writing, “When her days were full to give birth”  (Genesis 25:24) whereas regarding Tamar, the Torah wrote, “When the time came for her to give birth…” (Genesis 38:27). The Sages note that this indicates that Rebecca’s pregnancy came to its full term of nine months whereas Tamar’s pregnancy lasted only seven months before the children were born.

Unlike Jacob and Esau, the twin brothers born to Tamar were both righteous men. The some of the Sages, despite Zerah’s efforts, Perez was the first to fully enter the world because he would become the ancestor of the House of David and, ultimately, the Messiah. The line of Perez eventually produced Boaz, the grandfather of King David, who, like Judah with Tamar, performed a levirate marriage with Ruth.

This difference is remarkable. Isaac and Rebecca were both entirely righteous. Yet only one of their sons grew to be righteous. Tamar had to dress as a harlot to entice Judah to lay with her and when he saw that she was pregnant, Judah mistakenly assumed it was the result of a sin. Yet both sons were born to be righteous.

The names given to the twins by Judah were rife with significance. Zerah means shining and refers to the dawn. Perez means ‘to break through’ and the Kabbalistic work, Sefer HaBahir, teaches that it refers to the moon which experiences periods of “brokenness” and rebirth. This represents the baal tshuva, one who returns to God (i.e. the repentant) who, like the moon, waxes and wanes in his service to God, while shining light into the darkest corners.  In Kabbalah, the sun represents the completely righteous whose light shines consistently, without interruption or fluctuation.

The Talmud (Brachot 34b) teaches that the baal tshuva reaches a higher spiritual level and achieves what the consistently righteous cannot. It is for this reason that Saul, who was tall and handsome, was described by the Talmud as being “too righteous” and, for this reason, was unsuited to be king. Whereas David, who was described as “small,” is repentant. He became king, unified Israel, and is the ancestor of the Messiah.

Zerah stretched out his hand before his brother was born but it was withdrawn. This signifies the desire to be completely righteous in the service of God at the outset, a desire that is rarely manifested fully in this world. It is for this reason that Perez, representing the moon and the baal tshuva, precedes his brother into the world, thereby creating the possibility and precedence of repentance. (Likutei Sichot vol. 30, pp. 188-189).

Though Zerah is also righteous, his descendants are not as illustrious as those of Perez. In the Book of Joshua, we see that Achan (later called  Achar, the troubler of Israel, in 1 Chronicles 2:7), who descended from Zerah, pillaged an ingot of gold, a quantity of silver, and a “beautiful Babylonian garment” from Jericho, in contravention of Joshua’s directive that “all the silver, and gold, and vessels of brass and iron, are consecrated unto the Lord” (Joshua 6:19). For Achan’s personal sin, all the Children of Israel suffered defeat in battle.