How does Levirate marriage set the stage for the resurrection of the dead? 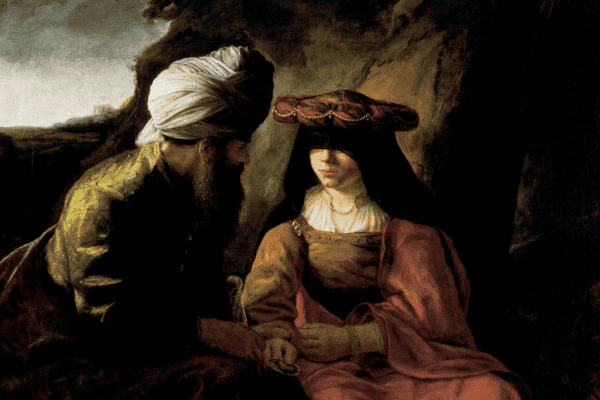 Then Yehuda said to his daughter-in-law Tamar, “Stay as a widow in your father's house until my son ﻿Sheila grows up”—for he thought, “He too might die like his brothers.” So Tamar went to live in her father's house.

The story of the Children of Israel descending into Egypt, so central to the rest of the Bible, is interrupted by the anomalous story of Judah and Tamar. A deeper look at the story will reveal why Judah and Tamar are also essential to the ultimate story of Redemption.

One essential element of the story of Judah’s family is entirely alien to the Western mind but must be understood for it to make sense. Judah has three sons from a Canaanite named was Shua: Er, Onan, and Shelah.

Er wed Tamar but in some way angered God so he died. Judah tells Onan, “Join with your brother’s wife and do your duty by her as a brother-in-law, and provide offspring for your brother” (Genesis 38:8)

Judah was instructing Onan to perform the Biblical commandment of Levirate marriage, or Yibum (יבום). Onan chose to spill his seed rather than perform this commandment and was thus killed by God. Judah then instructed Tamar to wait until the youngest brother came of age, at which time Shelah would fulfill this commandment. When the time came however, Judah withheld Shelah and Tamar tricked Judah into performing the commandment himself.

This mitzvah is explicitly commanded in the Book of Deuteronomy (25:5-6):

When brothers dwell together and one of them dies and leaves no son, the wife of the deceased shall not be married to a stranger, outside the family. Her husband’s brother shall unite with her: he shall take her as his wife and perform the levir’s duty. The first son that she bears shall be accounted to the dead brother, that his name may not be blotted out in Yisrael.

This explains Onan’s refusal to perform the commandment. When a man performs a levirate marriage, the resulting child is not considered his offspring, or, as it is explained in the Bible, “Onan, knowing that the seed would not count as his, let it go to waste whenever he joined with his brother’s wife, so as not to provide offspring for his brother (Genesis 38:9).”

The male relative who performs the levirate marriage is referred to as a goel, or redeemer, since he is essentially redeeming the dead man’s inheritance which has no one to receive it. This is clearly seen in the book of Ruth, in which a close relative of Elimelech, Ruth’s deceased father-in-law, is described as a “goel”. Like Onan in the story of Judah and Tamar, the relative in Ruth’s story forgoes performing the commandment of yibum. Boaz steps in and declares himself to be willing to perform the commandment instead and redeem the inheritance.

The commandment is inexplicable. Under normal circumstances, it is forbidden for a man to marry his sister-in-law (Leviticus 18:16).  Levirate marriage is permissible only when the dead brother had no children at all. As previously stated, the child is not considered to be the offspring of his biological father, rather the first child born to the brother’s widow would be deemed the heir of the deceased brother, and able to claim the deceased brother’s share of inheritance. If the deceased brother was the firstborn son, his inheritance was a double share.

Though Deuteronomy states that Levirate marriage is incumbent on the brother, the Bible never describes a case in which it is the brother who acts as a redeemer. In the case of Judah and Tamar, the brothers do not perform the commandment. It is, in fact, the father-in-law who fulfills the command. In the case of Boaz, he is even further removed.

According to biblical law, there is no need for a marriage ceremony between the widow and the deceased’s brother as they are already bound by divine decree, thus, they need only cohabit to perform a Levirate marriage. Nevertheless, the Sages decreed that the couple perform a marriage-like ceremony recite the marriage blessings and write a marriage contract.

Rabbinic decree currently forbids Levirate marriage as part of the modern prohibition against polygamy. The sages also question whether men today are on a high enough spiritual level to perform the commandment with proper intention as it is tainted with the sexual impropriety.

Upon the death of the brother, the wife is considered betrothed to a yet-to-be determined male relative of her deceased husband. She may not marry until she performs a Levirate marriage. In lieu of the Levirate marriage, halitzah, a form of divorce, is performed. The childless widow who remarries someone other than her brother-in-law without performing the halitzah ceremony is considered in Jewish law to be an adulterer. The process involves the widow making a declaration, taking off a shoe of the brother, and spitting on the floor. Through this ceremony, the brother and any other male relatives are released from the obligation. The ceremony of halitzah makes the widow free to marry whomever she desires, except for a Priest.

Perhaps most inexplicable is Ruth, a convert from the nation of Moab. Moab, as its name proudly proclaims, is composed of the descendants of the incestuous union of Lot and his daughter. When proposing that they make their father drunk in order to lie with him, the older daughter uses an unusual term (Genesis 19:32):

Come, let us make our father drink wine, and let us lie with him, that we may maintain life through our father.

The term ‘to maintain life’ is a reference to the commandment of levirate marriage, as seen in the case of Juda’s sons (Genesis 38:8). The Messiah from the House of David will be descended from multiple cases of Levirate marriage; Judah and Tamar, Ruth and Boaz, and even Lot and his daughter. This is necessary, as Levirate marriage is a commandment that supercedes death, setting the stage for the resurrection of the dead.