What Does the Command to Redeem the Firstborn have to do with the Exodus? 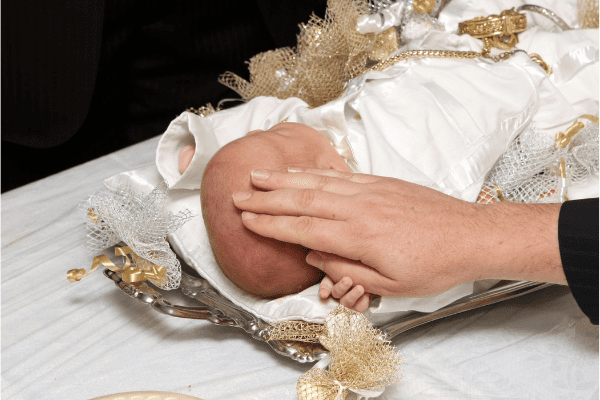 Judaism is an ethnic identity that bears with it many religious obligations. It is widely known that Jews circumcise their sons on the eighth day, a ritual called brit milah, as mandated in the Torah. But less well-known is the commandment of pidyon haben, redeeming of the firstborn, which the Children of Israel are commanded to perform as part of the Exodus (Exodus 13:13):

But every firstling ass you shall redeem with a sheep; if you do not redeem it, you must break its neck. And you must redeem every first-born male among your children. 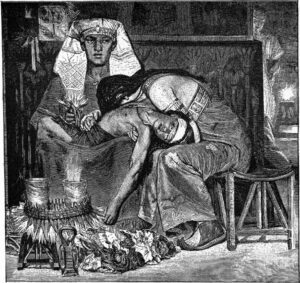 Death of the Firstborn

Since the ceremony is performed for the firstborn male of the mother, a father can perform pidyon haben for many sons born to different mothers, but a mother only has one first-born who “opens her womb.” The ceremony, accompanied by a festive meal, should be performed one month after the birth but, if not done then, has no end limit.

If the mother’s first pregnancy ended in stillbirth, the subsequent child does not have a pidyon haben. If she miscarried within the first forty days of gestation, and a son is born next, he would need to have a pidyon haben. If she miscarried after the first forty days, a rabbi should be consulted whether the next child is considered “the opener of the womb.

If twin boys are born, only the firstborn must be redeemed. If a boy and a girl are born, the boy must only be redeemed if he is born first.

If a woman converts to Judaism, even during the pregnancy, her firstborn requires a pidyon haben. If a woman who already had children converts, her first Jewish-born son does not need to be redeemed, nor do the children who are born after her conversion.

In this mitzvah (Biblical commandment), a Jewish firstborn son is redeemed by the father no sooner than 30-days after his birth by giving five silver coins (at least 101 grams) to a Kohen (a Jewish man of the priestly caste). Traditionally, the mitzvah is performed during a festive meal attended by family and some friends. If the 30th day falls on Shabbat or a holiday, the pidyon haben is delayed until the next day. If the father does not redeem the son, the requirement passes onto the son himself. 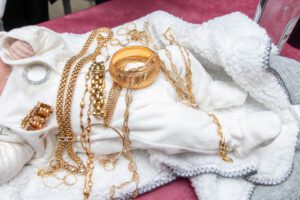 A baby bedecked with gold jewelry at his redemption ceremony (Shutterstock.com)

The technical reason for the mitzvah is based on the firstborn being designated in Egypt for future service in the Tabernacle/Temple. It is for this reason that they were spared from the final plague in Egypt. The tribe of Levi was intended to receive a portion of the land upon arriving in Israel. After the sin of the Golden Calf, the firstborn demonstrated their unsuitability for service in the Temple, whereas the tribe of Levi showed their faithfulness. But this meant that the firstborn, who were intended for the Temple, received a portion of the land whereas Levi did not. In order to fix this inequity, the firstborn pays silver to the Kohanim, a subset of the tribe of Levi.

It is for this reason that firstborn daughters are not included in this mitzvah, as they would not serve in the Temple.

The meal is set, hands are washed and the blessing over bread recited. The father brings the infant son and five silver coins to the Kohen; reciting the following:

Father: My Israelite wife has borne me this firstborn son.

Father: I want this, my firstborn son, and here you have five coins which are required of me for the redemption.

The father extends his hand with the redemption money and recites the following two blessings:

Blessed are You, Lord our God, King of the Universe, who has sanctified us with His commandments and commanded us concerning the redemption of a son.

Blessed are You, Lord our God, King of the Universe, who has granted us life, sustained us and enabled us to reach this occasion.

The father then gives the money to the kohen. The kohen takes the money and then, while holding the money over the child’s head, recites the following:

This instead of this; this a substitute for this; this [one] is forgiven upon this. And this lad shall enter to life, to Torah [study] and to fear of G‑d. May it be [G‑d’s] will that just as [this boy] entered redemption, may he also enter Torah [study], the wedding canopy, and good deeds. Amen!

He then places his hand on the child’s head and blesses him as follows:

May God bless you and guard you.

May God shine His countenance upon you and grant you grace.

May God turn His countenance towards you and grant you peace.

God should guard you against all evil, [may He] guard your soul.

For long days and years of life shall be added to you.

God should guard you against all evil, [may He] guard your soul.

The Kohen lifts the cup of wine and recites the blessing over the wine before drinking. The festive meal continues.

Reasons for the Mitzvah

The Sefer HaChinuch states the reason for this commandment is that everything in the world belongs to G‑d. When we consecrate our very first and very best, we are reminded that everything really belongs to our Creator, and that we must “purchase” it from Him before using it.

One hidden meaning suggested is that this commandment is a reminder that when given a choice between his firstborn or submitting to God’s will, Pharaoh chose to rebel against God by refusing to allow the Jews to leave.