Who was the Pharaoh of the Exodus?

A new king arose over Egypt who did not know Yosef.

There are several Pharaohs mentioned in the Torah. The first contact with an Egyptian ruler described in the Bible takes place when Abraham goes to Egypt to escape a famine (Genesis 12). But the influence of the Egyptian monarchs in the Torah begins to take prominence in the story of the sale of Joseph, and continues until the splitting of the sea when Pharaoh’s army disappears in the water.

Despite their prominence in the Torah narrative, these Egyptian rulers remain nameless. There are many theories as to their identities, and experts have disputed this topic for years. This article presents some of the more prevalent ideas.

Joseph serves one Pharaoh, but Exodus opens with a “new king over Egypt who did not know Yosef” (Exodus 1:8). This was the pharaoh who ordered the midwives to throw the male Hebrew babies into the Nile and, ironically, whose daughter raised Moses. This pharaoh died before God told Moses to return to Egypt.

Although Ramses II is regularly associated with the pharaoh from the biblical Book of Exodus, there is no historical or archaeological evidence for this whatsoever. This perception of him as the nemesis of Moses was set forward by popular culture, most notably in the classic Cecil B. DeMille film The Ten Commandments in 1956, as well as the more recent animated film Prince of Egypt in 1998. There is no archaeological evidence for this, nor is it consistent with details in the Biblical account. Ramses II lived to be ninety-six years old, had over 200 wives and concubines, ninety-six sons and sixty daughters, most of whom he outlived. 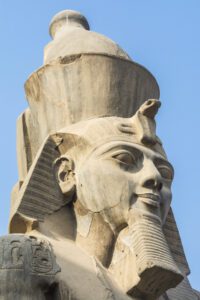 Head of Ramses II at the Luxor Temple, Egypt (Shutterstock.com)

Determining the date of the Exodus is a matter of controversy. Some of the opinions in modern Biblical scholarship place the events of Exodus around the year 1185 BCE. This would indicate that the pharaoh at the time of the Exodus was Ramses III, who reigned from 1186 BCE to 1155 BCE. According to this theory, Moses was born around 1220 BCE during the reign of Ramses II.

Others, like Rodger C. Young from the University of Oxford, claim that a more literal reading of the Bible places the Exodus much earlier, in the 15th century BCE. which would correspond to the reign of Pharaoh Amenhotep II (1455-1418 BCE). Egyptian history indicates a sudden lack of military action by Amenhotep II beginning in 1446 BCE, a fact that would be consistent with the loss of nearly the entire army at the Red Sea.

The eminent Egyptologist and biblical scholar Kenneth Kitchen disputes this, setting the date of the Exodus in the 13th century BCE.

According to the Jewish sources and dating system, the Exodus occurred in 1313 BCE. (2448 years after Creation), while according to the secular calendar it would have occurred at around 1478 BCE.

Other scholars have set the most probable date for the Exodus as about 1290 BCE. If this is true, then the oppressive pharaoh noted in Exodus (1:2–2:23) was Seti I, who reigned 1318–1304 BCE, and the pharaoh during the Exodus was Ramses II.

Alfred Edersheim proposes in his “Old Testament Bible History” that Thutmose II is best qualified to be the pharaoh of the Exodus based on the fact that he had a brief, prosperous reign, and then a sudden collapse with no son to succeed him. His widow, Hatshepsut, then became first Regent for Thutmose III, and then Pharaoh in her own right. Edersheim states that Thutmose II is the only Pharaoh’s mummy to display cysts, possible evidence of plagues that spread through the Egyptian and Hittite Empires at that time.

Stephen Gabriel Rosenberg, a Senior Fellow at the Albright Institute of Archaeological Research, published an article in the Jerusalem Post in 2015 suggesting that the Hebrews were enslaved for a wave of building projects instituted by Akhenaten, an iconoclastic but unpopular ruler. Upon his death, the crown passed to his son-in-law Tutankhaten, later called Tutankhamun. In about 1325 BCE Tutankhamun was forcibly succeeded by his general Horemheb. Rosenberg suggests that when leaving Egypt, the Hebrews stole Tutankhamun’s movable battle-shrine (which was significantly absent from his treasures that were uncovered in Howard Carter’s 1922 explorations of his tomb in the Valley of the Kings). Rosenberg suggested that the Hebrews incorporated it into the Tabernacle, placing the date of the Exodus at about 1330 BCE, as King Tut reigned from about 1334 to 1325 BCE.  This would place the arrival of Joseph at about 1760 BCE, which corresponds in time to the entry of the Hyksos from Syria, with whom the ancient historian Josephus links the Israelites. This also fits in well with the fall of the walls of Jericho, which its British excavator Kathleen Kenyon placed during the fourteenth century BCE.

David Rohl‘s 1995 A Test of Time revised Egyptian history by shortening the Third Intermediate Period of Egypt by almost 300 years. As a result, the synchronisms with the biblical narrative results in the Second Intermediate Period King Dedumose II, who died in 1690 BCE, as the pharaoh of the Exodus.