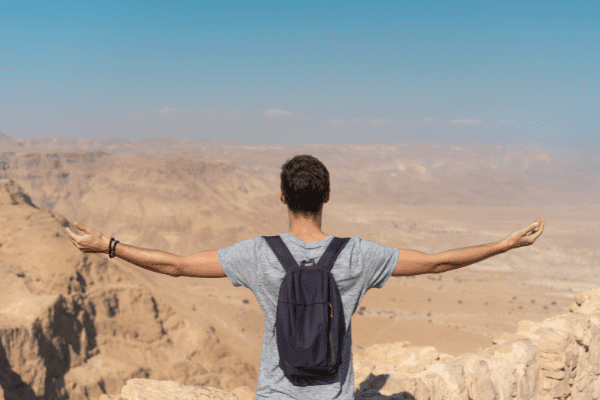 For you are going to conceive and bear a son; let no razor touch his head, for the boy is to be a nazirite to Hashem from the womb on. He shall be the first to deliver Yisrael from the Philistines.”

It is not common for someone to take a nazirite vow in modern times. The most notable exception was Rabbi David Cohen who, like Samson, became a nazirite for life. And both of these nazirites have a role in redemption.

The connection to the Torah portion quickly becomes apparent as it relates the story of a woman whose son becomes a nazirite. The Talmud identifies the woman as Zealphonis, the wife of Manoah of the tribe of Dan. An angel came to her in a vision and told her that, though she had been barren, she was going to have child. The angel then warns her that she should abstain from drinking wine as her son was to be a nazirite. The condition of nazirite as described in the Torah was the result of a vow taken by an adult male, requiring him to refrain from drinking wine, cutting his hair, or becoming defiled by proximity to the dead. The vow specified a length of time that the person would remain a nazirite. But the angel’s instruction described a different type of nazirite; a nazirite from the womb. This is a fetus who did not take on the vow of his own volition and remains a nazirite until his death.

The angel also makes a startling promise; the child will save the Jews. The woman was incredulous, but when the vision was repeated a second time she realized it was from God.

Zealphonis was careful to follow the angel’s instructions. When Samson grew up, he became a judge of Israel and fought the Phillistines. Rashi (Gen 49:16) explains that this was predicted in Jacob’s blessing to Dan. In this regard, Samson was similar to King David.

David was, of course, the salvation of Israel in his day, and the Messiah is prophesied to come from him. Interestingly, David’s father, Jesse, had another name, Nachash (Targum Ruth 4:22). Nachash (נחש) means “snake” in Hebrew, and this is the title that Jacob’s prophecy attributes to the tribe of Dan. Nachash has the numerical value of 358, which is equivalent to the numerical value of the Hebrew word for Messiah, Mashiach (משיח).

Samson, a descendant of the tribe of Dan, had messianic connections and could possibly have brought the final salvation of the Jewish people. In fact, his very name hints to this. Samson’s Hebrew name, Shimshon (שמשון), contains the Hebrew word for sun, shemesh (שמש). Shemesh is another reference to his connection to Messiah since the prophet Malachi refers to salvation coming from the sun:

But for you who revere My name a sun of victory shall rise to bring healing. You shall go forth and stamp like stall-fed calves, Malachi 3:20

The Midrash Rabbah identifies this passage as referring to the ultimate Messiah:

Moses asked: ‘shall they remain in pledge forever?’ G-d replied: ‘No, only until the sun appears’, that is, till the coming of the Messiah; for it says, But unto you that fear My name shall the sun of righteousness arise with healing in its wings. Exodus Rabbah 31:10

Samson, a nazirite, was Messiah-like in that he saved the Jews from the oppression of the Philistines. And, according to the Sages, was a candidate for the Messiah. The Israel Bible relates a remarkable story that illustrates another connection between a nazirite and the salvation of Israel:

Though typically people do not take nazirite vows nowadays, a famous exception was Rabbi David Cohen (1887-1972). Known as “The Nazir” (The nazirite), he was a close student of Rabbi Abraham Isaac Kook, and was a nazirite for most of his life. Following his move to the Land of Israel, Rabbi Cohen also refused to leave Jerusalem. Along with Rabbi Tzvi Yehuda Kook, he was brought by his students serving in the Israeli Army to the Western Wall shortly after its liberation during the Six-Day War. When secular Israeli soldiers saw Rabbis Cohen and Kook at the Kotel (Western Wall) in the midst of the war, they gasped and pointed, assuming the two saintly rabbis were none other than the Messiahand the Prophet Elijah.  The Nazir of Jerusalemwas a reminder of the holiness that special people can achieve, even today.