What Rachel Can Teach You About Being a Mother 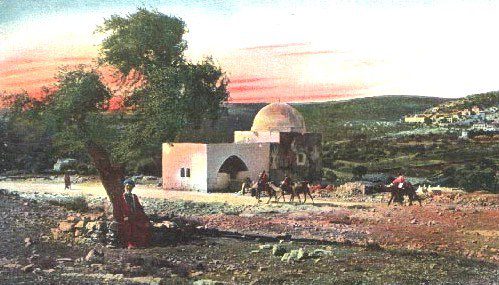 Thus Rachel died. She was buried on the road to Efrat—now Beit Lechem.

The Torah lists many holidays, but Mother’s Day is not one of them. Because the Torah commands us to honor our parents, every day is Mother’s Day (and Father’s Day). But if there could be one designated day to celebrate the divine gift of motherhood, it would be the 11th day of the Hebrew month of Cheshvan; the day commemorating the passing of the matriarch Rachel.

Rachel’s gravesite in Bethlehem is a popular prayer spot. Men and women visit her grave and pour out their hearts in prayer. Women who want to have children pray at her grave throughout the year. But the anniversary of her death is an especially busy time at the Tomb of Rachel. Her death is commemorated more than any of the other patriarchs and matriarchs.

Of all the women in the Bible, why Rachel? Why not the other three matriarchs? Sarah and Rivkah are the mothers of all the Jews alive today. Eve is the mother of mankind. Why do we commemorate the death of Rachel more than any of the other matriarchs or patriarchs?

Rachel’s virtues were apparent from the moment Jacob met her at the well. It was literally love at first sight. The Torah states that he even kissed her (Gen.29:10). But this marital love was surely true of other matriarchs as well.

Like Sarah (but distinctly unlike her sister and their handmaids), Rachel only bore children after years of prayer. And like Rebecca, childbearing was an ordeal for Rachel.

But Rachel was clearly unique in other respects. While the other matriarchs are buried alongside their husbands in Hebron, Rachel’s Tomb is just south of Jerusalem outside of Bethlehem. It is interesting to note that Rachel died giving birth to the only son of Jacob born in Israel.

In Jewish tradition, Rachel’s role as the “mother of the Jews” is based on events that happened (and will happen) after she died. According to the prophet Jeremiah, it is Rachel’s tears over the suffering of the Jews in exile that will convince God to bring His children home:

Thus said Hashem: A cry is heard in Rama— Wailing, bitter weeping— Rachel weeping for her children. She refuses to be comforted For her children, who are gone. Thus said Hashem: Restrain your voice from weeping, Your eyes from shedding tears; For there is a reward for your labor —declares Hashem: They shall return from the enemy’s land. And there is hope for your future —declares Hashem: Your children shall return to their country. Jeremiah 31:14-16

The Sages explain that, in fact, her burial site is connected to her role as “mother of the Jews” and the exile:

God knew that the Temple would ultimately be destroyed, and His children were going to be exiled, and they would pass by the [graves of the] forefathers and ask them to pray for them, and it would not help them. And while they were walking on the way, they would come and embrace the burial place of Rachel, and she would stand and plead for mercy from the Holy One, saying to Him: ‘Master of the Universe! Hear the sound of my weeping and have mercy on my children, or give me my reward [for my treatment of my sister Leah].’ Immediately, God listened to her prayer. How do we know this? It is written, ‘…bitter weeping; Rachel is crying over her children,’ and then it is written, ‘there is hope for your end [promises God], and the children shall return to their borders.'” (Pesikta Rabbati (Ish Shalom), parasha 3)

It is interesting to note that from the first day of the year, the 1st day of the Hebrew month of Tishrei, until the 11th day of Cheshvan (the day that Rachel died) is 41 days. This is equals to the numerical value of the Hebrew word eim (אם), meaning ‘mother’. In a deep sense, the 11th of Cheshvan is truly Jewish Mother’s Day.

But what is it about Rachel that made her the ultimate Jewish mother?

According to the Talmud (Megilla 13b) it was one selfless act of complete and all-encompassing compassion for another:

“Jacob asked Rachel: “Will you marry me?” She said: “Yes, but you should know that my father’s a trickster and he will outwit you.” “And what is his trickery?” “I have a sister older than I and he will try to marry her off first.” So he gave her signs (signals by which he would ensure the bride was Rachel). Come the night of the wedding and Rachel saw Leah being led to the chuppah. She thought: Now my sister will be humiliated? And she gave over the signs.” (Talmud Megilla 13b)

Rachel could not bear the fact that her sister would be humiliated. She had so much compassion that she was willing to give over the signs that Jacob had given her, and with that give over her intended husband to her sister to marry, just so that Leah would not suffer embarrassment and shame.

Compassion allows us to see past our own subjective perspectives and biases and into the heart of another without total acceptance. We leave our judgments aside and accept others for who they are. It was this trait of compassion that made Rachel the quintessential Jewish mother. Since she had compassion and mercy on others, it is her tears and her pleas that convince God to have compassion and mercy on us.

Now that her children have returned from exile, thousands of Jews visit her grave on the 11th of Cheshvan. Perhaps seeing her children will turn Mother Rachel’s tears of sadness into tears of joy.