What Does the Balfour Declaration Have to do With Genesis 12:3? 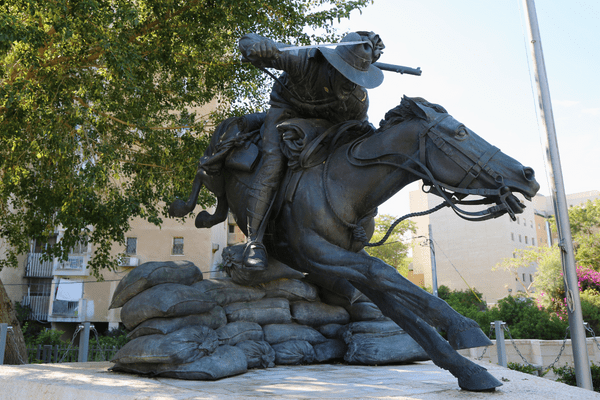 I will bless those who bless you And curse him that curses you; And all the families of the earth Shall bless themselves by you.”

A wonderful aspect of reading the weekly Torah portion is the synchronicity that happens when the scripture matches up with current or historical events. This week, we read the section of the Torah containing God’s promise to bless those who bless Israel (Genesis 12:3, The Israel Bible p.30). And Wednesday, November 2, is also the 105th anniversary of the signing of the Balfour Declaration, a public statement issued by the British government in 1917 during the First World War announcing its support for the establishment of a “national home for the Jewish people” in Palestine.

While most people can see that the Balfour Declaration was a clear case of Britain blessing Israel, few people know that the payback for that act came even before the ink had dried.

How were the British blessed for signing the Balfour Declaration?

In 1917, World War I was going poorly for the Allied forces. All sides were increasingly short of manpower and subject to economic stress. The British forces were having an especially difficult time in Palestine. After two defeats in Gaza, the general staff was changed. The Ottoman forces, allied with Germany, had established a 30-mile-long fortified line of defense running south from Gaza to Beersheba. The terrain was cut by deep wadis that made movement impossible. Based in Egypt, the British forces needed to move north in order to capture Jerusalem and control Palestine. The north of Israel was essential to maintaining maritime supremacy in the Mediterranean. They also needed to protect Egypt as the gateway to Africa.

The British commanders finally decided to break through at Beersheba. Sitting aside one of the main routes from Egypt to Palestine, Beersheba contained water wells that were described in the Bible. These wells were a matter of life or death for the British army’s Egyptian Expeditionary Force (EEF), far from home and running on overextended supply lines. Its initiative had been faltering and the leadership had been passed on to a new commander: British General Edmund Allenby.

Though the strategic importance of the city was clear to Allenby, neither was the Biblical import lost on him. One of his first acts as commander was to issue a Bible to all of his soldiers. Historians have recorded how the British general was often found on his knees, deep in prayer, asking for direction from above.

The city was defended by Ottoman Fourth Army Troops who were heavily dug in. Artillery and machine-gun emplacements made any approach difficult. The terrain was flat and treeless, heavily favoring defense.

On October 31, two things happened at the same time in different parts of the World. After a three-day trek through the desert, soldiers from the Australia and New Zealand Army Corps (ANZAC) arrived outside Beersheba. At the same time, the United Kingdom’s Foreign Secretary Arthur Balfour decided that the requisite support for a declaration in support of the Jews existed and he began to compose the document.

The ANZAC launched a series of what was intended to be surprise attacks against the strong defenses dominating the eastern side of Beersheba, but their early morning approach was spotted by German air-patrols and wandering Bedouin. They encountered Ottoman emplacements where there had been none, and all the ANZAC attacks were rebuffed.

With less than two hours of daylight remaining, the commanders faced a difficult decision. The commanders had to decide whether to withdraw in order to find water for the thirsty troops and their mounts, which would allow the Turks to refortify Tel Be’er Sheva, or to advance and try to conquer the city before dark.

Australian General Henry Chauvel chose an entirely unorthodox approach. Normally the forces would have approached on horseback and dismounted for an infantry charge with rifles blazing. At the last minute, he ordered the 800 mounted soldiers of the 4th Light Brigade to charge into the city at breakneck speed. Their bayonets drawn and their rifles slung across their backs, they ran directly into the entrenched Ottoman machine guns. Their advance outpaced Turkish artillery, who could not adjust their cannons fast enough to zero in on the mounted Australians.

Part of the regiment jumped the four-foot-wide trenches before turning to make a dismounted attack on the Ottoman infantry, while the rest continued into the town. The Ottomans had rigged the wells with explosives, preferring to see them destroyed rather than fall into enemy hands. Due to the speed of the attack, all of the wells were captured intact.

The victory in Beersheba, on the same day that Lord Balfour began to compose his declaration in support of a Jewish state, was the first step of an offensive leading to the capture of the Ottoman stronghold in Gaza one week later. The true impact of the charge into Beersheba was felt six weeks later when the EEF captured Jerusalem. The battle was considered one of the last great cavalry charges before sophisticated weaponry rendered horses obsolete in the military.

The charge claimed the lives of 31 Australians and eight New Zealanders, but Palestine was in the hands of the British who were ready to declare to the world that they were ready to take their part in creating a Jewish State.

At the 100-year anniversary reenactment of the charge of the Australian Light Brigade in Beersheba, then- Australian Prime Minister Malcolm Turnbull emphasized this point.

“Had the Ottoman rule in Palestine and Syria not been overthrown by the Australians and the New Zealanders, the Balfour Declaration would have been empty words,” the Australian premiere said.

But it could also be that had Lord Balfour decided to refrain from expressing support for a Jewish state, the charge would have been unsuccessful and the Allied Forces would never have conquered the Middle East.