Happy Anniversary! Do You Know What Happened 100 Years Ago Today? 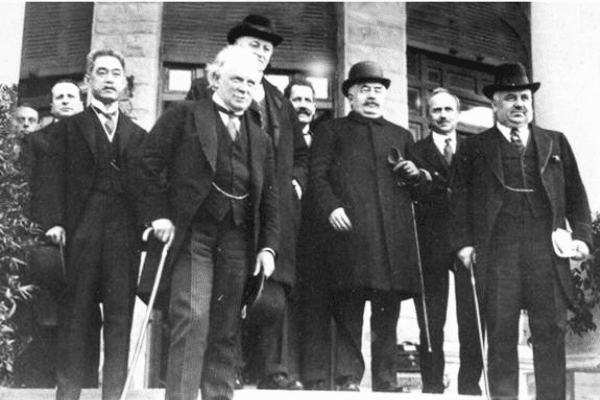 Thus said Hashem: I will raise My hand to nations And lift up My ensign to peoples; And they shall bring your sons in their bosoms, And carry your daughters on their backs.

This morning, thanks to social media, I was able to have an argument with someone on the other side of the world who I have never met. The argument was over something trivial I didn’t really care about. Rather than bring the world together in harmony, the internet has shown us how divided and polarized people are.

Yet exactly one hundred years ago today, on July 24, 1922,  a miracle happened as a result of a show of unity between the nations of the world.

While many people believe that the modern State of Israel was the result of the Holocaust and a global recognition that the Jews needed a refuge from the storms of antisemitism, the historical truth is that long before World War II there was a global awakening and call to return the Jews to the Promised Land. It was understood by many that doing so would be a fulfillment of biblical prophecy and bring the world to a higher spiritual level.

And while the United Nations is currently a political tool that has been perverted to be used against the Jewish State, its roots aspired to bring this global process of tikun olam (fixing the world) into reality, beginning exactly one century ago.

On April 24,1920, 51 nations, so recently divided by World War I, sent representatives to the League of Nations in Sanremo, Italy. At the San Remo Conference, they agreed to divide up the Ottoman territories, putting Israel in the hands of the British. The decision incorporated the Balfour Declaration, written during the war in 1917, which established the basis for a Jewish state in Israel. The text of this agreement was confirmed by the Council of the League of Nations on July 24, 1922

How did this all come to be?

In 1917, while the outcome of World War One was very much in the balance, the United Kingdom’s Foreign Secretary Arthur Balfour sat down to write a letter to Lord Rothschild, a leader of the British Jewish community, for transmission to the Zionist Federation of Great Britain and Ireland. The letter was the first public expression of support for Zionism by a major political power, and was the result of rising sympathy among British evangelical Christians towards the “restoration of the Jews” to Palestine that had begun 80 years earlier.

In some ways the Balfour Declaration was the beginning of the process. It certainly was the seed from which the State of Israel grew, but it nearly became a meaningless piece of paper. When Lord Balfour put pen to paper, the British armies were stuck in Egypt and the British government had no political ability to carry out this vision.

On October 31, 1917, the remarkable charge of the Australian 4th Light Horse Brigade captured Beersheba from the German and Ottoman forces. This opened the way for the British forces to advance and capture Jerusalem six weeks later, making the Balfour Declaration relevant, and having practical implications for the Jewish people.

After the war, in 1920, the Paris Peace Conference founded the League of Nations, the first worldwide intergovernmental organization whose principal mission was to maintain world peace. That same year, the seven-day San Remo Conference was held. The full text of the Balfour Declaration became an integral part of the San Remo resolution and the British Mandate for Palestine, turning the letter of intent into a legally-binding foundational document under international law.

51 nations signed the resolution. No objections were raised from the Arab world. In fact, a signed agreement between Emir Faisal, the third son of Hussein ibn Ali al-Hashimi, King of the short-lived Kingdom of Hejaz, and Chaim Weizmann, a Zionist leader, was one of two documents used by the Zionist delegation at the Paris Peace Conference to argue that the Zionist plans for Palestine had prior approval of Arabs.

Faisal, who acquiesced to a Jewish state in order to gain support for his claim on  Syria, Jordan, Saudi Arabia, Iraq, Lebanon, and Egypt, was the sole recognized representative of the entire Arab people in 1918. No other Arab states existed at the time. Ironically, the same San Remo Conference that paved the way for Israel also paved the way for the Arab nations that sprung into existence in the region, allocating 99% of the land to form new Arab states.

It took another 27 years and a new organization named the United Nations to formally establish the Jewish state, but the foundations were laid and confirmed by the League of Nations in San Remo in 1922.