Waving the Flag During the Exodus and in Modern Israel

The Israelites shall camp each with his standard, under the banners of their ancestral house; they shall camp around the Tent of Meeting at a distance.

As its name implies, the Book of Numbers opens with a census, counting the men of Israel for the purposes of war, and then describes how they camped in the desert. Very much like an army camp, the tribes were arranged in four groups of three tribes each. At the center of the camp was the Tabernacle surrounded by the tribe of Levi.

Each tribe was assigned a banner in order to organize the encampment of over 600,000 men and their families. Each tribe’s banner was based on the color of its gemstone on the choshen (priestly breastplate), and its emblem reflected the blessing the tribe’s patriarch received from Jacob listed at the end of Genesis.

The Midrash, (Bamidbar Rabbah)  states that when God revealed Himself on Mount Sinai, there were 22 myriads of angels with him, grouped by flags. When the Jews saw that the angels were grouped by flags, they too had a strong desire to be grouped this way. They said, “If only we too could have flags like the angels.” Out of his strong love for them, God then swore that the time would come when they, too, would be grouped by flags. In the Book of Numbers, we see God demonstrate His great love for the nation of Israel by making them flags, like those of the ministering angels, so that they might be easily recognizable.

The idea that flags represent God’s love for His people is further expressed in Song of Songs, which is itself a metaphor for the love between God and the Jews:

He brought me to the banquet room and his banner of love was over me. Song of Songs 2:4

It again hints at the concept of a flag in chapter 5:

My beloved is clear-skinned and ruddy, Preeminent among ten thousand. Song of Songs 5:10

The Hebrew word that is translated here as ‘preeminent’ is dagul (דָּגוּל), which is derived from the root degel, meaning flag.

Just as God assigned tribal flags when the Children of Israel came out of Egypt as a nation, so too did Theodor Herzl, the founder of modern Zionism, envision the need for a flag for the modern nation of Israel. He described this need for a flag in a letter to Baron Hirsch:

What is a flag? A pole and a piece of cloth? No, Sir! A flag is greater than this. With a flag, people are led to wherever you want, even to the chosen land. For a flag, people live and die. It is the one thing people are willing to die for.

Herzl’s initial design that he sketched depicted seven gold stars, to mark seven daily working hours, on white background, to mark a new and pure life.  In honor of the First Zionist Congress in 1897, Herzl’s good friend, David Wolfson, suggested a design that would resonate more with Jewish tradition and culture. He retained the gold stars and added the Lion of Judah and 2 blue stripes, mimicking the familiar design of the traditional Tallit (prayer shawl). Techelet, the blue dye that the Bible commands to include on the fringes of a four-cornered garment such as a prayer shawl, has been an important color in Judaism since biblical times.  Our sages explain that, “Techelet (blue) resembles the sea which resembles the sky which resembles God’s throne of glory.” 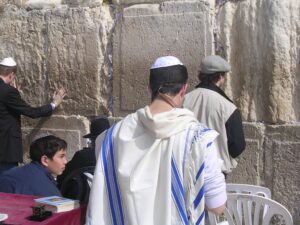 However, 50 years later when the State of Israel was established, its leaders were reluctant to make this design the national flag. They were afraid that Jews around the world would display it in their countries and be suspected of having a dual-loyalty. For half a year of independence, the State of Israel did not have an official flag.

Israel’s first Prime Minister, David Ben-Gurion, turned to the public for recommendations, specifying that the flag had to be blue and white. The artist assigned with producing the flag, Richard Ar’el, preferred a three parts flag [triband] similar to the French or Italian flags, with two blue rectangles on the sides and a central white rectangle with a blue Star of David. Ar’el’s design was ultimately rejected, as the government preferred a white background with two light blue horizontal stripes, as per the Talmudic description of God’s throne of Glory.