Understanding the Healing Process for a “Leper” 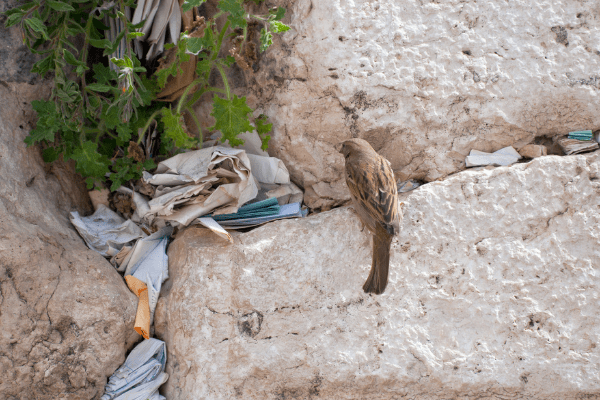 This shall be the ritual for a leper at the time that he is to be cleansed. When it has been reported to the Kohen,

The healing process for tzaraat (a spiritual malady frequently mistranslated as leprosy) requires a series of sacrifices in the Temple. Two live birds are brought to the priest. Springwater is placed in an earthenware vessel, over which one of the birds (traditionally recognized as being a sparrow) is slaughtered, and into which the blood is allowed to run. The priest then dips the remaining bird and other items into the bloodied water and sprinkles the afflicted seven times on the back of the hand. The slaughtered bird is buried in the presence of the afflicted and the live bird is freed into the open field.

The afflicted washes their garments from impurity and shaves off all their hair and then waits for seven days to begin the final steps of the purification ceremony (Leviticus 14:8–9). On the seventh day, the afflicted again washes the garments they had been wearing from impurity and again shaves off all of their hair. On the eighth day, the afflicted brings three animal sacrifices to the Temple: a sin offering of a female lamb and a guilt offering and a burnt offering, both of male lambs (Leviticus 14:10).

Blood from the slaughtered guilt offering was placed on the right ear, right thumb, and right big toe of the afflicted (Leviticus 14:14). The need for this to be done was cause for some complication because the afflicted was not allowed into Temple grounds prior to his purification process, and the blood of the offering was not allowed out of the Temple grounds. To reconcile this dilemma, the afflicted stuck these body parts through the gateway one at a time to receive the blood. The same was done with the oil from the flour offerings. If the afflicted lost any of these body parts after he was ready for purification, he could never obtain purification (Mishnah Nega’im 14:9).

The bird in this ritual is a dror, a sparrow, that lives beyond the city. Dror itself means “liberty,” and is built from the Hebrew root meaning “to dwell.” The sparrow’s liberty comes from being able to live anywhere. But even though it is free, it spends its days interacting with other sparrows. Its appearance in the ritual is a reminder to the slanderer that he is part of a community and must interact appropriately with others.

There is much speculation about the meaning behind this enigmatic and unusual ceremony. Tzraat is generally understood as the physical affliction that comes from speaking slander. One commentator notes that the main element of the sacrifice, the birds, remind the penitent that like the birds, his sin was senseless chattering. But through this senseless chattering, he has killed the public image of the target of the slander. And even if the person’s image survives, he is now wandering the world marked with a bloodstain.

The Zohar notes that the two birds symbolized two types of speech. It is not enough to refrain from slander (which can kill). The person afflicted with tzaraat is also being punished for refraining from positive speech. Not only can negative words destroy, but the lack of positive words can as well. Thus it is not enough for one to abstain from saying and doing something wrong, but rather we need to seize opportunities to say and do that which is right.

The two identical birds, which symbolize our speech, represent the past and the future, respectively. The bird of the past is sacrificed by our sins. For this, we repent. But the bird of the future is set free, signifying the potential for positive change.