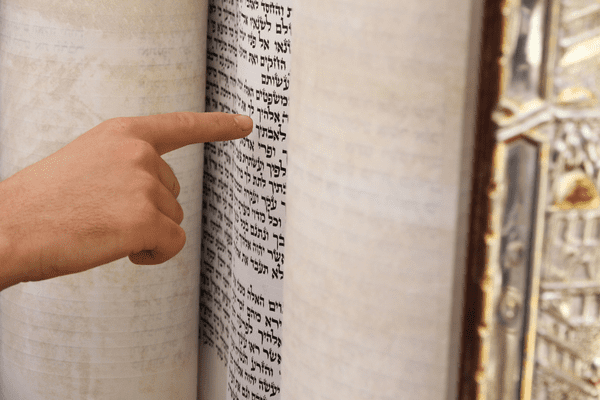 The teaching of Hashem is perfect, renewing life; the decrees of Hashem are enduring, making the simple wise;

A few years ago, I was in Tel Aviv visiting a friend. After a pleasant afternoon, I decided to have a coffee at a sidewalk cafe before heading home. I was engaging in people-watching when I noticed that someone was watching me in return. A young man with tiny eyeglasses and a ponytail was staring at me. To be honest, in Judea I look fairly typical. But in Tel Aviv, my long beard and wild sidelocks marked me as a ‘settler’. The young man smiled and asked if he could join me. I was happy for the opportunity to meet someone new, so I agreed.

He clearly had some emotional baggage and began unloading as soon as he sat down.

“Do you want to know what I don’t like about religion?” he said. “It doesn’t make sense. Let’s say that there is a God. He put all of his best work into heaven. Heaven is perfect. The angels are perfect. What does he want from us on earth? He can stay up there and live the good life. Why does he need us to do good deeds? The angels can do better.”

I nodded, preferring to avoid a theological argument.

“Hmmph,” he said. “That’s what I thought. No answers. You become religious and stop asking these questions.”

He picked up his coffee and walked away. After he left, I opened up my prayer book, turning to Psalm 19 (The Israel Bible, pp. 1492-1494) where David addresses this very question. What exactly does David say?

The first half of the psalm discusses the glory of God that reveals itself in the heavens, specifically through the sun, while the second part deals with the praise of God’s Torah and its effects on man. What is the connection between these two sections?

The heavens declare the glory of Hashem, the sky proclaims His handiwork. Psalm 19:1 (The Israel Bible, pp. 1492

After praise like that, how can David praise the mundane? What can anything on earth possibly offer that could compare?

It is true, as David noted, that heaven declares God’s glory. But are there other ways to perceive God’s glory? Perhaps this sounds trite, but I have experienced countless things that have given me glimpses of God’s glory here on earth. I remember the first time my child reached up to grasp my hand when taking his first unsteady steps. I clearly saw God in that moment.

Rabbi Abraham ibn Ezra (1089 – 1167 Spain) taught that it is possible to know God through nature, which encapsulates the wonder of God’s Creation. Twice a day, at sunrise and sunset, the first days of Creation can be experienced.

And nature praises God simply by performing His will, constantly and in an unwavering fashion.

So dedicated are the elements of nature to fulfilling their divine roles in this world that, according to the sages, when God wanted to divide the Red Sea so that the Jews could escape from the Egyptians the sea refused to split claiming: “I was created as water and water does not act in such a manner.”

God responded: “I created you, and when I did I intended for you to divide at precisely this moment for the Jews to pass through.”

Upon hearing these words, the waters divided. So great was their zeal to serve God that, at first, they refused to return to their original state. God had to again insist that the waters return in order to drown the Egyptians.

God’s will and His glory are implicit in nature, but, according to the Ibn Ezra, King David taught that there is a second way to get to know God; through the Bible. It is possible to understand God’s glory through studying His Torah. In fact, Jewish tradition teaches that God used the Torah as the blueprint for Creation.

David describes this in the second half of the Psalm:

The Hebrew word for ‘teaching’ is, of course, Torah. By studying the Bible, and delving into its teachings, Man can attain a glimpse of God’s glory.

The Torah describes God and His relationship with His Creation, but it also instructs Man in the commandments. Just as nature performs the will of its Creator by following His laws, so too Man can attach himself to the Creator by performing His will, without question.

Jewish prayer is performed by swaying back and forward at the waist. Tradition teaches that this embodies the tension of being a physical being with a divine soul, caught between heaven and earth.