The Torn Page that Gave Life 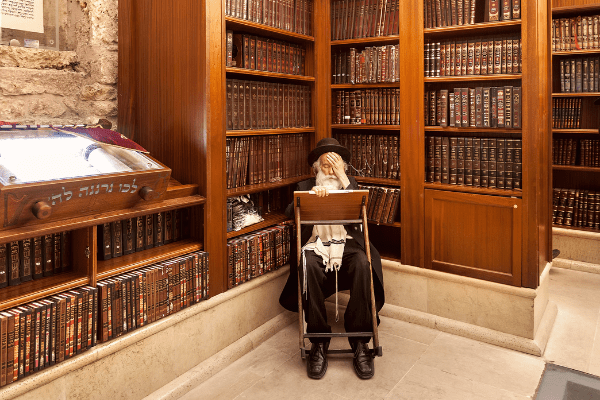 She is a tree of life to those who grasp her, And whoever holds on to her is happy.

On June 29th, 2022, Israel lost a great light last month when Rabbi David Weiss Halivni passed away in Jerusalem at the age of 94. A  Professor of Talmud and recognized as a brilliant scholar, he served as the head of the Union for Traditional Judaism’s rabbinical school.

During the Holocaust, at the age of 16, he was deported to Auschwitz. After a week he was transferred to a forced labor camp, Gross-Rosen, then to AL Wolfsberg, and later to Mauthausen concentration camp. He was the only member of his family to survive.

As we approach the 9th of Av, the day of mourning for the destruction of the Temples and Jewish suffering throughout history, we share this incredible story of survival, an excerpt from his autobiography, The Book and the Sword. It is a story of how, more than the Jews keep the Torah, the Torah keeps the Jews.

Rabbi Livni describes how a page torn from a Torah book gave life to himself and his fellow inmates:

“I have not mentioned that, of course, the Germans were guarding the tunnel. At intervals, a German sentry was placed to see that everything in the tunnel was in order. In my journeys in and out, I met the sentries and, as camp protocol required, lifted my mutze, my cap, and greeted them. That became habit; I did it almost unconsciously.

“Once I met a particular German who I recognized was not really a German, not a member of the SS, but a member of the Todt, the brigade founded by Fritz Todt, Hitler’s chief civil engineer, which was in charge of construction work in Germany. I realized he was not a real German because his German was not very good. He avoided speaking it and used it only when he cursed and threatened. Otherwise, he didn’t speak much. He was stationed at crossroads in the tunnel so that he could see what was happening on all sides. I used to see him several times a night. If I went in and out of the tunnel five times during an eight- or ten-hour shift, I met him ten times. Each time I lifted my mutze and murmured my greetings. In the course of time, some sort of relationship developed between us, even though we never talked. Our eyes met and a kind of body language emerged. After several months, we knew each other in a peculiar way; we tolerated each other. One night, while I was walking the route, absorbed in my thoughts, with the false sense of security that routine provides-I still had to make sure the chila wouldn’t bury me-I passed by the Todt as he was eating his scheduled snack, his meal between meals. In characteristic German style, he ate at the same time every night and, what’s more, he ate the same thing every night; a thinly sliced sandwich containing some greasy substance that stained the wrapping paper and made it transparent. He and his eating habits became as much a feature of the tunnel as the chila and carrying the drills.

“This time, however, our meeting was different. His sandwich was wrapped in a page of the Orach Chaim, a volume of the Shulchan Aruch, Pesil Balaban’s edition. The Balabans began publishing the Shulchan Aruch, the Jewish Code of Law, in Lenberg in 1839. The first publisher was Abraham Balaban, and after his death, he was succeeded by his widow, Pesil. Pesil’s edition of the Shulchan Aruch was the best; it had all the commentaries, including that of Rabbi Shloma Kluger. As a child of a poor but scholarly home, I had always wanted to have her edition. We had a Shulchan Aruch, but it wasn’t Pesil’s. Ours was also old and torn. It was my ambition as a child to own a Vilner Shas (a complete set of all the Talmud’s volumes), Pesil’s Shulchan Aruch, and a set of “Rambams”, a complete set of Maimonides’ major legal writings. Here, of  all places, in the shadows of the tunnel, under the threatening gaze of the German, a page of the Shulchan Aruch, with fatty spots all over it, met my eyes. The page was from the laws of Passover (Orach Chaim 434). The question on the page deals with whether an agent can nullify the leavened bread of a household before Passover, which is the subject of a disagreement. On the one hand, why not? After all, isn’t there a general rule: “A man’s agent is like unto himself”- everything we can do a proxy can do for us? However the Ran– a fourteenth-century scholar- argues that since the bittul (the annulment) is a result of hefker (abandonment), the nullifying is considered a kind of disowning of ownership, which cannot be done through an agent.

“Upon seeing this wrapper, I instinctively fell at the feet of the guard, without even realizing why; the mere letters propelled me. With tears in my eyes, I implored him to give me this bletl, this page. For a while, he didn’t know what was happening; he thought I was suffering from epilepsy. He immediately put his hand to his revolver, the usual reaction to an unknown situation. But then he understood. This was, I explained to him, a page from a book I had studied at home. Please, I sobbed, give it to me as a souvenir. He gave me the bletl and I took it back to the camp. On the Sundays we had off, we now had not only Oral Torah but Written Torah as well. The bletl became a visible symbol of a connection between the camp and the activities of jews throughout history. It was not important what the topic was, whether agency or any other. Perhaps it was symbolic; who knows what mission we were supposed to fulfill here? The bletl became a rallying point. We looked forward to studying it whenever we had free time, more so even than to the phylacteries. It was the bletl, parts of which had to be deciphered because the grease made some letters illegible, that summoned our attention. Most of those who came to listen didn’t understand the subject matter, but that was irrelevant. They all perceived the symbolic significance of the bletl.

“The bletl was entrusted to Mr. Finkelstein-I believe his name was Moshe- from Mateszalka, a town in Hungary where my father had been in the ghetto. Mr. Finkelstein was a “Jew who always prayed”; his lips always moved. I have a feeling that he wasn’t sure after reciting his prayers once if he had recited them correctly. Or maybe he recited them once in the Ashkenazic pronunciation and once in the Sephardic. Having the bletl around in the camp was dangerous. Someone caught with it would be considered to be carrying contraband. Mr. Finkelstein volunteered to keep the bletl and, of course, produced it every second Sunday, when we were off. He must have carried it on his person; I’m sure he slept with it. The Bletl was always with him and secure. Knowing that the bletl was with Mr. Finkelstein, we felt secure as well.