Jerusalem Day: A First-Hand Account of the 1967 Temple Mount Battle 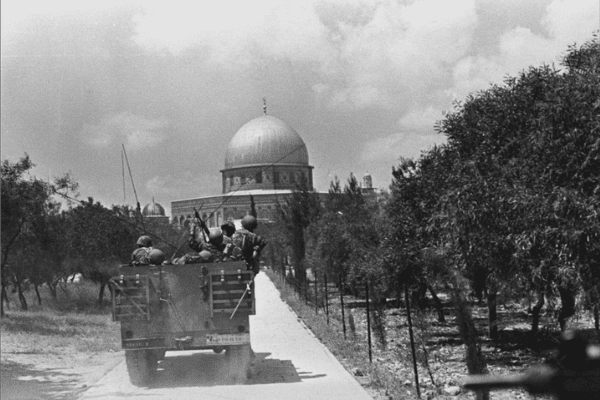 Proclaim further: Thus said the lord of Hosts: My towns shall yet overflow with bounty. For Hashem will again comfort Tzion; He will choose Yerushalayim again.”

Jerusalem Day commemorates the reunion of the Jewish people with their holiest site, the Temple Mount, during the 1967 Six-Day War. It is celebrated annually on the 28th of Iyar and is marked officially throughout Israel with state ceremonies and memorial services.

The historical backdrop for the holiday began with the 1947 United Nations Partition Plan which established Jerusalem as an international city. In the ensuing War of Independence in which the newly established Israel was attacked on all fronts by seven Arab nations, Jordan illegally occupied the eastern section of the city which included the Temple Mount. Jews were evicted and prohibited from visiting their holy sites. Under Jordanian rule, half of the Old City’s 58 synagogues were demolished and the Jewish cemetery on the Mount of Olives was plundered for its tombstones, which were used as paving stones and building materials.

In 1967, as the Arab nations, led by Egypt, began preparing to wage another all-fronts attempt to annihilate the Jewish state, Israel sent a message to King Hussein of Jordan saying that Israel would not attack Jerusalem or Judea and Samaria as long as the Jordanian front remained quiet. Urged by Egyptian pressure and based on deceptive intelligence reports, Jordan began shelling civilian locations in Israel, to which Israel responded on the 6th of June by opening the eastern front. The following day, June 7, 1967 (28 Iyar 5727), Israel captured the entirety of Jerusalem including the Temple Mount 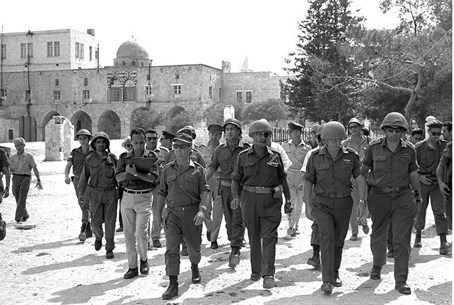 Rabbi Yisrael Ariel is one of the most powerful advocates for the Temple Mount, having taken part in the battle that reunited the site with its people. In 1967, Rabbi Ariel was a 28-year-old yeshiva (religious seminary) student in Jerusalem, married with two small children. In the tense buildup to the Six-Day War, Rabbi Ariel was called up as a reservist in a paratroopers unit and began training for a parachute insertion into the Sinai Desert. When the war broke out, his unit was loaded onto buses that took them not to the airfields but to Jerusalem itself. They fought their way to the Rockefeller Junction next to the Rockefeller Museum, where they camped overnight. The next morning, a mistaken IDF artillery barrage killed 13 Israeli soldiers. Later that day, his unit fought their way into the Old City and, after a firefight on the Temple Mount, succeeded in conquering the site. Ariel was stationed on the Temple Mount as the rest of his unit continued down to the Western Wall.

“I’m not going to describe what others did but there is a big difference between a few people sneaking into the Temple Mount and conquering it,” Rabbi Ariel said.

[The government and army] will tell you they searched here and that they only found one rifle in one of the attics. I know what I saw here with my own eyes: cannons, mortars, piles of shells, jeeps, a whole army camp with tents. This was an army base for the Jordanian army. This was their camp.

So when [IDF General] Mordechai (‘Mota’) Gur’s forces came here, we had to fight. To my sorrow, many [Jordanian soldiers] were also killed. They were killed right here. Jews were not killed here, but there were battles on the Temple Mount against the Jordanians who were here.

So there were battles on the Temple Mount. There was a lot of shooting. Jordanians were killed here, and after the battle, they were left here.

Not only that but I saw with my own eyes how 2,000 soldiers of the Jordanian Legion surrendered. Who did that? Our group went from house to house gathering them, and brought them to the Temple Mount; 2,000 Legion men.

When Jerusalem surrendered, Ruhi al-Khatib, the Jordanian governor of Jerusalem, came to submit a surrender letter to the Jerusalem Brigade. He snuck in and snuck right back out. He came to our division commander, ‘Mota’ Gur. He said to him, ‘Here is our letter of surrender’. He came along with all Jordanian dignitaries. [Gur] said to him, ‘You are free’, and sent them away.

I thought that a real military rabbinate should have in its storehouse what we have in the institute today: the Menorah, vessels for the Temple, clothes for the Kohanim (priests) and the altar, all ready in crates in the basement so that when we reach Jerusalem there will be trucks that unload everything, and we can get to work. So it’s true that we usually improvise after something has happened, but in this case, we did not even have the beginning of what was needed. I asked myself why that was, and that is how the first ideas were born.

Rabbi Ariel is a member of the nascent Sanhedrin, an attempt to re-establish the Biblically mandated court of 71 elders.