Pray to God… With Your Body 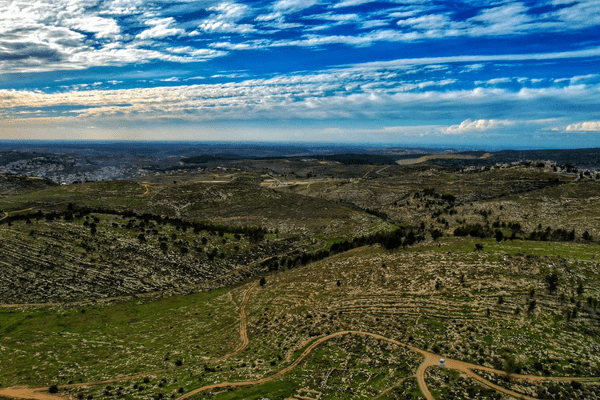 All my bones shall say, “Hashem, who is like You? You save the poor from one stronger than he, the poor and needy from his despoiler.”

“Abba (Dad), what does it mean that we were created in God’s image? Does God look like me? Is he this tall and does he have brown hair?”

Studying Torah with my son is the best, but it is also challenging. Especially at breakfast time.

“God doesn’t have a body,” I answered.

“But He could if He wanted to,” my son responded. “Right?”

He jumped up. “Can God jump this high?”

That left me no choice. I got up out of my chair and began jumping up and down too, joining in the chant.

It struck me that we were fulfilling the idea “prayer of the body,” learned from King David’s words is Psalm 35.

“All my bones shall say, “Hashem, who is like You? You save the poor from one stronger than he, the poor and needy from his despoiler.” Psalms 35:10

Based on this verse, the sages taught that it is not enough to worship God with our words alone, but that we must pray to him and worship with our whole bodies.

The body is a wondrous thing. The way it works is amazing. Worshipping God from inside this living example of His handiwork is a powerful experience. The Talmud (Berachot 4:3) recognizes this, establishing the thrice-daily recitation of 18 benedictions which correspond to the spine:

Rabbi Simon said, [there are 18 blessings] corresponding to the 18 bones in the spine since when a person prays he has to bend all of them bowing down. What is the reason? “All my bones shall say, o Eternal, who is like You?” (Psalm 35:10)

The Talmud acknowledged that God created our physical body in order to serve Him. One of the ways we can do this is by bowing down to him, by bending our spine in prayer. The Mishna Brurah (Orach Chaim 95), a code of Jewish law whose rulings are considered by many to be authoritative, adds that we should fulfill this verse by being in motion while we pray. Jews fulfill this by what is called “shuckling,” or gentling swaying back and forth.

Rabbi Chaim Nissel from Yeshiva University elaborates on this idea:

Although our prayers are expressed verbally, tefilla (prayer) is meant to be more than a mere recitation of words. Chazal (the sages) created a structure that mandates us to speak our prayers, and to also utilize sight, hearing, and movement as we pray. Prayer is meant to be a full-body experience and a complete immersion into the encounter. When Rabbi Akiva prayed alone, he moved from one corner of the room to another, due to his many bows and prostrations (Berachot 31a). Other stories recount how rabbis were so engrossed in prayer they were not aware of things going on around them. Let us recognize the gift we have in being able to approach the Almighty in prayer. Let us focus on the words we are saying, the sights and sounds of prayer, and the movements in which we engage to come closer to Hakadosh Baruch Hu (the Almighty blessed be He). Let us ask Hashem (God) to open our mouths in prayer, but also to allow our bodies and souls to come close to Him.

Though many understand this verse to be referring to prayer, in essence all of our actions that are done to sanctify God’s name is a fulfillment of this verse. After participating in the Selma-to-Montgomery March on March 21, 1965 with Martin Luther King Jr., A.J. Heschel famously proclaimed that as a result he had learned to ‘pray with his legs.’ He further wrote:

“For many of us the march from Selma to Montgomery was about protest and prayer. Legs are not lips and walking is not kneeling. And yet our legs uttered songs. Even without words, our march was worship.

The Israel Bible teaches that the pinnacle of serving God with our whole physicality is by living in the land of Israel:

David, surrounded by enemies and troubles, seeks out God and prays for greener pastures. He poetically yearns for a time when all of his bones will engage in praising God. The Sages wonder what situation would allow him to serve God with all his bones. Some commandments are done with one’s mind, others with the mouth and some with one’s limbs, but what commandment encompasses the entire body? The answer is the command to settle the Land of Israel. King David was yearning to live in Israel, where one’s entire body is completely immersed in the land, God’s chosen land.