In what way are the Jewish people like a dove? 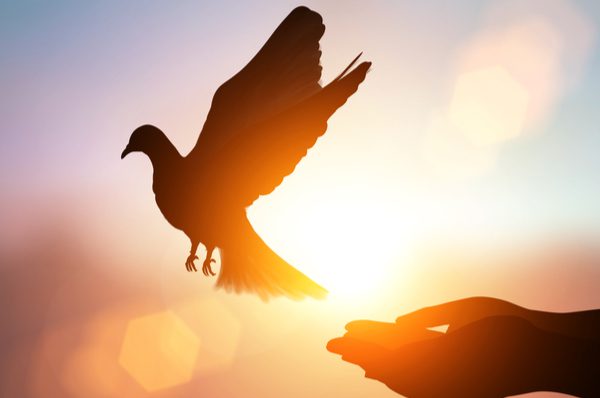 But the dove could not find a resting place for its foot, and returned to him to the ark, for there was water over all the earth. So putting out his hand, he took it into the ark with him.

The dove appears numerous times in the Bible. It was one of the animals used for sacrificial offerings in the Temple, a fact which is mentioned in the Bible and was confirmed by an analysis of bird remains that were found in Jerusalem. The first time the dove appears in the Bible, however, is at the time of the flood. The Bible records that after the floodwaters during the time of Noah subsided and the tops of the mountains became visible, Noah decided it was time to see if the land was inhabitable again. He first sent a raven and then a dove to see if the floodwaters had receded.

At first, the dove could not find a resting place and returned to the ark. Seven days later, Noah tried again and released the dove from the ark. This time, it came back with an olive branch in its mouth, indicating that the waters had indeed decreased. The image of a dove grasping an olive branch has become a symbol of peace. This icon, which emerged at the re-initiation of the world, when God’s anger was quenched and Noach was commanded to continue mankind anew, emerged from the Land of Israel, the land of peace.

After another seven days, Noah sent out the dove one more time. This time, the dove did not return and Noah knew that it was safe to leave the ark.

Throughout Talmudic literature, the Jewish people are compared to the dove. Once a dove meets her mate she never leaves him for another, and a dove, even when her offspring are taken, will never abandon her nest. In a similar fashion, the Children of Israel are faithful to God.

The Sages also comment that the dove that Noah sent from the ark foreshadows the journey of the Jewish people throughout history. Just as the dove found no rest for the sole of its foot, so the Jews will find no solace in exile. Just as the dove returned to the ark seeking shelter, so the Jews will return from exile to the Land of Israel. Like Noah’s dove, the people have remained faithful to God, and now, after thousands of years of absence, have returned to His land.