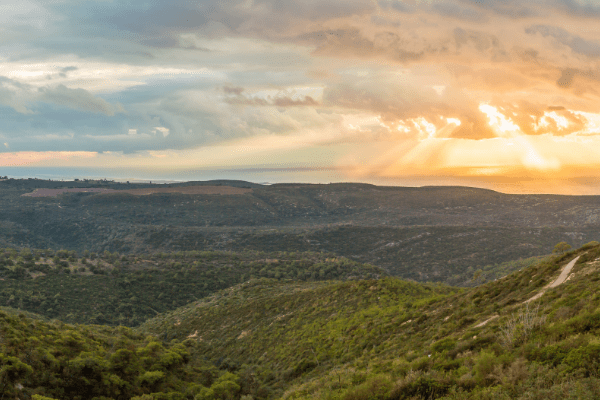 The Book of Deuteronomy is the fifth and final book of the Five Books of Moses. By the time Deuteronomy starts, the Children of Israel have already left Egypt, stood at Mount Sinai to receive the Torah, built the Tabernacle and wandered through the desert for a total of 40 years. They are now camped at the plains of Moab on the bank of the Jordan River, finally ready to enter and inherit the promised land.

This is the second time the Children of Israel are in this position. Thirty eight years prior they also had the opportunity to cross over and inherit the land that God promised to their forefathers. However, they lost that chance with the sin of the spies, and, as a result, they were forced to stay in the desert for another 38 years. With the exception of Joshua and Caleb, the generation that had left Egypt died in the wilderness, and their children are now ready to make the journey into the Land of Israel that their parents could not.

Moses himself is not going to be leading the people into the Holy Land. He, too, will die in the wilderness as a result of his own sin. It is his faithful servant, Joshua, who will inherit the mantle of leadership and lead the people into the Land of Israel. The Book of Deuteronomy, therefore, contains Moses’ farewell speeches to the People of Israel just before his death. He takes this opportunity to impart to them the thoughts, laws and the ideas that he wants them to consider as they prepare for their entry into the land.

Moses starts his speeches by reminding the People of Israel how God had commanded their fathers to leave Mount Sinai and head towards the Promised Land. He then reminds them that things soured when the spies brought back their slanderous report. He does this in order to review what went wrong the first time, and caution them not to repeat the mistakes of their fathers. At the same time, he also mentions the military success against Sihon and Og in order to encourage the nation and give them the confidence that they can, and will, conquer and inherit the land.

His longest speech contains a review of a number of laws and commandments that the people will have to observe in the Land of Israel. He reviews these now in order to warn the people not to get lax in their observance of the commandments after they settle in the land. This would lead to punishment and would ultimately result in exile from the land. Moses ends his speeches with a warning about the consequences of not following the commandments, as well as an introduction to the concept of repentance. His goal is to teach the people that no matter how much they sin and how for they stray from God, and that even if God exiles them from the Land of Israel, hope is never lost. God never gives up on His children and they, in turn, should never give up on Him. When they sincerely regret their actions and repent for their sins, He will take them back with open arms and return the Israelites to the land of their fathers. Finally, Moses has the people renew their covenant to faithfully follow the Almighty and observe His commandments.

We see that throughout the entire Book of Deuteronomy, Moses is encouraging and teaching the people how to successfully live in the Land of Israel. Before he begins, Moses makes sure to address his speeches to the entire nation of Israel, as the Land of Israel belongs to everyone. Young and old, rich and poor — everyone can find his or her place in this special land.