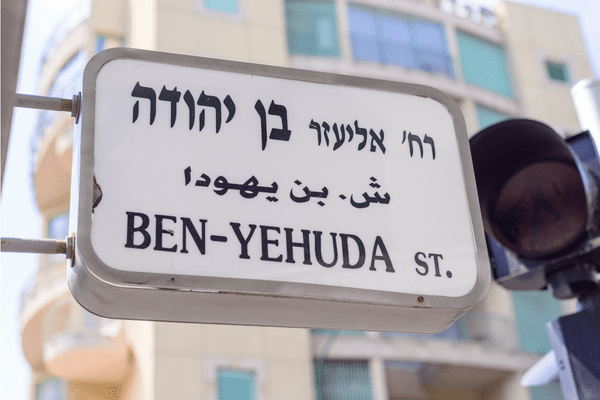 Countless miracles led to the establishment of the modern state of Israel, not the least of which was the resurrection of Hebrew as a spoken language. Much of the credit for this goes to one man, who died exactly one century ago. Eliezer Ben Yehuda played such a prominent role in reviving Hebrew as a spoken language that his birthday became an Israeli national holiday, Hebrew Language Day. Even though he never lived to see the country declare its independence, his accomplishments helped bring about a prophetic development.

Eliezer Yitzhak Perlman was born on 7 January 1858 in the city of Luzhki, Russia (now part of Belarus). His parents were followers of Chabbad Hassidut and, like most Jewish children of the era, Eliezer attended a Jewish elementary school where he studied Hebrew and the Bible from the age of three. His parents hoped he would become a rabbi and sent him to a yeshiva (school of Jewish studies). There, he learned the classical religious texts in Hebrew, but he also delved into secular writings, many of which were about modern Zionism. It was at this time that he developed the belief that the revival of the Hebrew language in the Land of Israel could unite all Jews worldwide.

Ben Yehuda made aliyah in 1877 to Ottoman Palestine where he taught in a Jewish school. His first wife and three of his five children died tragically. His second wife (the younger sister of his first wife) became an accomplished journalist and author, joining in his mission of reviving the Hebrew language.

Ben Yehuda was so committed to the goal of reviving Hebrew as a spoken language that, in 1881, he and his friends agreed to exclusively speak Hebrew in their conversations. He also raised his son, Ben Zion, entirely in Hebrew, making him the first native speaker of modern Hebrew as a mother tongue.

Ben Yehuda did encounter resistance and opposition to his life-long mission. There were many religious Jews who believed that Hebrew was a holy language and should be reserved for religious purposes only. He was also imprisoned by the Ottoman government which thought (perhaps rightfully) that the revival of Hebrew was a form of Jewish nationalism.

Ben-Yehuda was a major figure in the establishment of the Committee of the Hebrew Language (Va’ad HaLashon), later called the Academy of the Hebrew Language, an organization that still exists today. In that role, he established the first modern Hebrew dictionary in 1910. This helped him coin new words that were needed for modern uses, and terms that were not found in Biblical Hebrew. Many of these words were incorporated from European languages. Though a good deal of these words have become part of the modern Hebrew language, others never caught on. His dictionary intentionally omitted any Aramaic words from the Mishna and Talmud.

Ben-Yehuda died on December 16, 1922 at the age of 64, and was buried on the Mount of Olives. His efforts were so successful that one month before he died, the British government recognized Hebrew as the official language of the Jews in the mandate of Palestine. Daniel Bensadoun wrote about Ben Yehuda’s accomplishment, saying, “Ultimately, the process of Hebrew’s return to regular usage was unique; there are no other examples of a sacred language becoming a national language with millions of first-language speakers.”

And British historian, Cecil Roth, summed up his accomplishments saying, “Before Ben-Yehuda, Jews could speak Hebrew, after him, they did.”

Many believe that Ben Yehuda helped bring about the prophecy described by Zephaniah:

For then I will make the peoples pure of speech, So that they all invoke Hashem by name And serve Him with one accord. Zephaniah 3:9 (The Israel Bible p. 1431)

The prophet is describing how, in the future, all the nations of the world will have ‘pure speech,’ safa b’rurah (שפה ברורה). Ibn Ezra, among other commentators, maintains that the pure speech that Zephaniah promises is the language of Hebrew, and that in future times the whole world will begin to learn Hebrew, the language of Creation. Biblical Hebrew is known as lashon hakodesh (לשון הקודש), ‘the holy language’. This verse is another incredible example of an obscure prophecy that has come to prominent fruition in our generation, as millions of people all over the world, both Jews and gentiles, are learning Hebrew in order to speak lashon hakodesh. And it is all thanks to the incredible efforts of Eliezer Ben Yehuda!