Biblical Boundaries of the Land of Israel 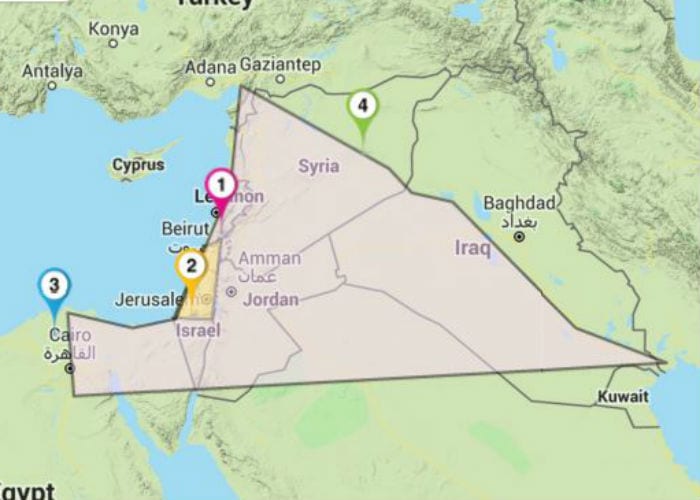 On that day Hashem made a covenant with Avram, saying, “To your offspring I assign this land, from the river of Egypt to the great river, the river Euphrates:

I assign the land you sojourn in to you and your offspring to come, all the land of Canaan, as an everlasting holding. I will be their God.”

This map features the biblical boundaries of the Land of Israel as described in Genesis 15:18 and Genesis 17:8.

There are two different phrases often used to describe the biblical boundaries of the Land of Israel:

The expression from Dan to Be’er Sheva appears nine times in the Bible (Judges 20:1, I Samuel 3:20, II Samuel 3:10, II Samuel 17:11, II Samuel 24:2, II Samuel 24:15, I Kings 5:5, I Chronicles 21:2, II Chronicles 30:5), and is used to define the area of the Israelite settlement in the Land of Israel (highlighted in yellow on the map).  These borders reflect the promise that God made to Avraham in Genesis 17:8 “And I will give unto thee, and to thy seed after thee, the land of thy sojournings, all the land of Canaan, for an everlasting possession.”  Though these are the basic borders of the Land of Israel, it is possible to expand beyond these borders as seen, for example, in Numbers 32.

The phrase “from the Nile to the Euphrates” includes a much bigger area than Dan to Be’er Sheva (highlighted in pink on the map).  This phrase has its source in the Covenant of the Parts in which God promises Avraham “’Unto thy seed have I given this land, from the river of Egypt unto the great river, the river Euphrates” (Genesis 15:18).  These two rivers mark the limits of potential expansion of the original borders of the Land of Israel.  In addition, Rabbi Menachem Leibtag explains that the Nile and the Euphrates represent the two centers of ancient civilization, Egypt and Mesopotamia.  By saying that the land in between these two bodies of water is set aside for the Children of Israel, God is implying that it is Israel’s destiny to become a blessing to all mankind by declaring His name “at the crossroads of the two great centers of civilization.”