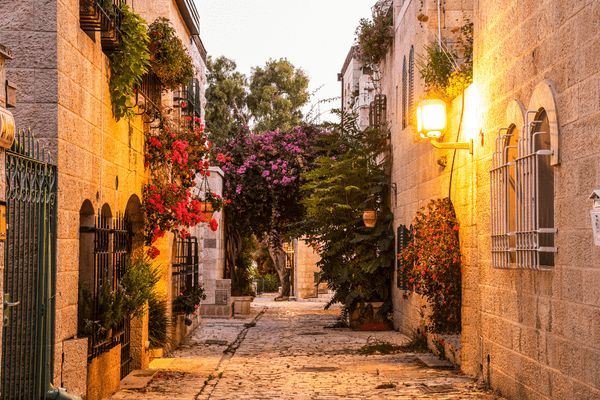 The parcel of land where he pitched his tent he purchased from the children of Hamor, Shechem's father, for a hundred kesitah.

Learning Torah with my ten-year-old son is a challenging experience. He asks the obvious questions that are disturbingly difficult to answer.

“Abba, did God promise all of Israel to Abraham, Isaac, and Jacob?” he asked.

“You know he did,” I answered.

“So why did Jacob buy the city of Shechem?” he asked. “He didn’t even intend to live there for long. His ultimate destination was Bethel and then Hebron, where his father lived.”

I opened my mouth, ready to answer. The question was silly and the answer was obvious. The only problem was I didn’t know what the answer was.

So I went to my library and looked for the answer and this is what I found.

Rabbi Abraham Ibn Ezra (12th century, Spain) gives a long answer touching on several points. The first point is that it is a great merit to own land in Israel. I can relate to this. I helped to pour the foundation of the house I built in Gush Etzion and literally cried as I shoveled the heavy concrete around. In fact, Ibn Ezra equates owning land in Israel to acquiring a portion in the world to come.

When explaining Abraham’s purchase of the Machpelah Cave in Hebron, Ibn Ezra states the following:

“This entire section was stated in order to highlight the merit of the land of Israel above all other lands, for both the living as well as for the dead.  Additionally, it comes to indicate that God’s word to Abraham concerning possession of the land was fulfilled.”

Not only is the merit of the land of Israel great for those who live there, there is even merit to being buried there. This is also applicable to Jacob’s purchase of Shechem, as it was destined to be the burial site of Joseph many years later.

Ibn Ezra also notes that with regard to both Hebron and Shechem, the patriarchs preferred to purchase the land rather than accept it as a gift, as a gift could be withdrawn. They wanted to ensure that their purchases would be universally and eternally recognized.

Indeed, the sages explained that there are three parts of Israel over which the Jewish right of ownership is most powerfully established by the descriptions of their purchase being explicitly described in the Bible: Hebron, Shechem, and the Temple Mount in Jerusalem.

There are some significant differences between the purchases, however. While the Machpelah cave was only suited to be a burial site, Jacob actually lived in Shechem for several years and raised his family there. He arrived there when his children were young, and left only when his grown sons, Simeon and Levi, killed the men of Shechem.

After purchasing this piece of land in Israel, Jacob celebrated by setting up an altar to God. This also stands in stark contrast to Abraham’s commemoration of the purchase by burying his wife.

As I explained what I had discovered to my son, he made the sweetest confession.

“I love Jacob the most,” he said. “He had it really hard. From the moment he was born, he had to fight. First, it was Esau and then it was Laban. Then it was the angel. But Jacob won every time. And he always seemed happy. He didn’t complain after Laban cheated him. He settled down with his two wives and had a bunch of children.”

But, Abba,” he hesitated before going on. “I think he was the happiest when he got to Shechem. He didn’t mind buying it because he was buying a home in the Land of Israel. I think that is why he made an altar. He wanted to include God in the celebration.”

I hugged my son, feeling a bit like Father Jacob; blessed with a family in a warm home in the holy land. It is not easy. Making a living and raising a family in Israel may be more difficult than it is in other places. But there is no doubt that I am feeling blessed.