A Biblical Source for the Story of Hanukkah? 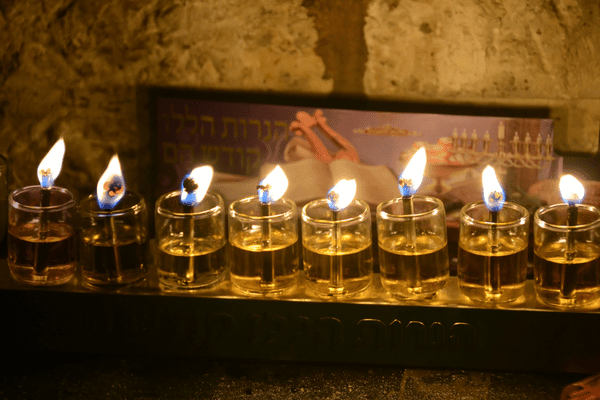 just as you saw how a stone was hewn from the mountain, not by hands, and crushed the iron, bronze, clay, silver, and gold. The great Hashem has made known to the king what will happen in the future. The dream is sure and its interpretation reliable.”

Every Jew knows the basis for our system of holidays: They came and tried to kill us. They failed and disappeared in the sands of time. We’re still around. Let’s eat.

Indeed, Jacob’s dream of angels ascending and descending a ladder to heaven has been interpreted as describing the natural process of nations rising and falling while Israel stands off to the side, immune to this natural process and neither rising nor falling.

The holiday of Hanukkah, on which we commemorate the victory of the Jews over the Seleucid Greeks, is no different. The Seleucids have long gone, but the the Jews are still around.

What is different about the holiday of Hanukkah is that it is the only Jewish holiday that does not have a biblical source. Or is it? According to some, there is actually a reference to the story of Hanukkah in the Bible.

The Book of Daniel takes place during the Babylonian exile. Daniel was a young Jew who was brought to the palace of Nebuchadnezzar, the Babylonian ruler, in order to serve the king.

In the second chapter of the Book of Daniel, Nebuchadnezzar has a dream which his own wise men are not able to interpret. He ultimately turns to Daniel for its interpretation. The dream was of a statue whose different parts were made of different materials. At the end of the dream, a stone is hewn from a mountain which strikes the statue, crushing all of its various parts. The stone then becomes a mountain that fills the whole earth.

Daniel explains that the different parts of the statue represent different world powers who will rise up and ultimately be defeated. The rock cut from the mountain which then fills the whole earth symbolizes the kingdom of Israel and the rule of the Messiah.

The sages suggest that the second part of the statue represents the kingdoms of Media and Persia, the third is Greece, and the fourth kingdom is Edom, which most rabbinic sources identify as Rome.

The medieval commentary known as the Ibn Ezra interprets this differently, including Rome within the third kingdom, presumably because of the similarities between Rome and Greece. He then identifies the fourth kingdom as Yishmael, which most sources identify as Islam.

The theory that Rome was the fourth and final kingdom that will reign before the rise of the Jewish people has a serious flaw. The fall of the fourth kingdom is supposed to usher in the Messianic era, but Rome has come and gone and the Messianic era has yet to begin.

Some rabbis continue to maintain that the fourth empire was hinting to Rome, explaining that Christianity is an extension of Rome. This is understandable as Christianity began in Rome, and the original Christian empire still exists in the Vatican.

Modern commentators, however, understand the vision of Daniel differently. They explain that the four kingdoms refer to Babylonia, Media, Persia, and Greece. Daniel’s vision, which predicted the the oppression of the Jews by different kingdoms, ended with reign of the Greek Seleucids.

This interpretation lends greater importance to the story of Hanukkah, suggesting that the Messianic era could have begun after the successful revolt of the Maccabees! However, the Hasmonean dynasty ultimately became wicked and did not merit the Messianic era.