Were Shiphrah and Puah the First Righteous Gentiles? 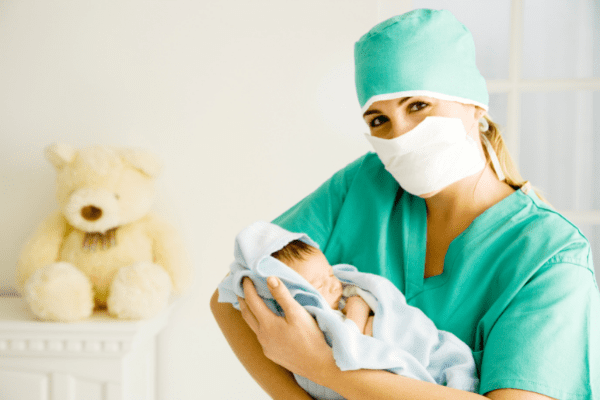 The king of Egypt spoke to the Hebrew midwives, one of whom was named Shiphrah and the other Puah,

While Israel was being blessedly prolific in Egypt and growing into a nation, Pharaoh ordered the midwives to kill the male Jewish babies. Shiphrah and Puah defied Pharaoh’s order and received God’s blessing for their courage. Their actions allowed Moses to be saved and opened the way for redemption.

But who were these powerful women? The Talmud (Sotah 11b) relates two opinions; Rav identifies Shiphrah as Jochebed, Moses’ mother, and Puah as Miriam, Moses’ sister.  Shmuel identified Puah as Elisheba, Moses’ sister-in-law and Aaron’s wife.

Rashi takes the view of Rav, explaining the meaning of the pseudonyms. Rashi explains that Shiphrah is derived from the Hebrew word which means ‘to improve,’ referring to the way that Jochebed would ‘improve’ the newborns by cleaning them and straightening their limbs. 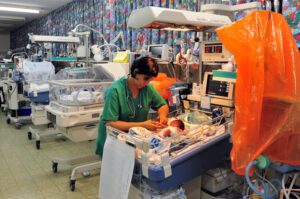 Attending to a newborn at Barzilai hospital in Ashkelon (Shutterstock.com)

Another explanation of the name comes from the Midrash relating how Amram, a leader among the Hebrews, reacted with despair to Pharaoh’s decree, noting that it was pointless to have children. Shiphrah ‘improved’ his response, noting that Pharaoh wanted to eliminate only the boy infants, whereas Amram’s response would eliminate the births of all Hebrews.

Another explanation of the names relate to their behavior toward Pharaoh. When she heard the royal edict, Puah was insolent (hofi’ah panim) toward Pharaoh and looked down her nose at him. Shiphrah mollified the king, improving his mood, hence the name ‘to improve.’

The midrash explains that not only did Shiphrah and Puah defy Pharaoh’s orders to kill the baby boys as they were being born, but if the midwives saw poor women, they would go and collect food and water from the houses of wealthy women which they gave to the poor ones, thus enabling them to provide for their children. In this spirit, Jewish communities come together even today to provide meals for families that have recently given birth.

Another midrash relates that the midwives knew that fetuses are liable to be harmed during the delivery and be born with some physical defect.  While helping with the birth, they prayed: “Master of the Universe, You know that we did not fulfill Pharaoh’s edict, but we seek to fulfill Your word. Master of the worlds, may the child emerge unscathed, so that the Israelites will not find a reason to speak against us, saying that we wanted to kill them, and they were born with defects.” God immediately accepted the prayer of the midwives, and all the children were born without flaw.

According to an additional tradition, in order to avoid such mishaps during the course of the delivery, the midwives prayed to God, saying: “Master of the worlds, Punish them for their sins now [i.e., in some way other than by death], and give them life, so it will not be said that we killed them by order of Pharaoh.” God did as they requested and let both the mothers and the children live (Exodus Rabbah 1:15).

The biblical commentator known as Malbim believes that Shiphrah and Puah are not names of people, but rather job titles. One job entailed helping a mother through the labor process, and the other cutting the umbilical cord and tending to the new baby’s needs. He further states that Pharaoh addressed many midwives, not only two, and not two who were in charge of many. Further, he says that these were righteous Egyptian women who feared G‑d and defied Pharaoh’s commands, and makes no mention of them converting.

Though the text refers to them as Hebrew midwives, some opinions, such as the Malbim cited above, identify them as non-Jews or converts. The Israel Bible cites Nechama Leibowitz, a noted 20th-century Israeli Bible scholar and commentator:

The identity of these ‘Hebrew midwives,’ meyaldot haivriyot (מילדות העבריות), is debated by Rabbinic commentators. Many have assumed, as the literal reading implies, that they were Jewish women. But other commentators, such as the Abrabanel, suggest that the midwives Shiphrah and Puah were Egyptians This interpretation is primarily based on the use of the phrase “fear of God,” a phrase often used to describe the behavior of exceptional gentiles, in reference to their heroic actions. According to these interpreters, the phrase meyaldot haivriyot, ‘Hebrew midwives,’ is deliberately ambiguous, and it actually refers to the “midwives for the Hebrew women.” If so, Shiphrah and Puah were the first gentiles in history to risk their lives in order to rescue a Jew. Israeli Bible scholar and teacher par excellence, Nechama Leibowitz, remarked about this passage, “If we accept that the midwives were Egyptian, a…very vital message becomes apparent. The Torah indicates how the individual can resist evil. He need not shirk his moral responsibility under cover of ‘superior orders’ … Neither moral courage nor sheer wickedness are ethnically or nationally determined qualities. Moab and Ammon produced a Ruth and Naamah respectively; Egypt two righteous midwives.”

Rabbi Joseph Telushkin explains that the non-Jewish (i.e. Egyptian) midwives who defied the ruler in order to save the Jews were similar to the righteous gentile rescuers of Jews during the Holocaust, many of whom had been religious, fearing God more than the Nazis. Those who aided the Nazis, on the other hand, feared the Nazis’ power more than they feared God’s judgment.

The name Šp-ra is found in a list of slaves in Egypt during the reign of Sobekhotep III (around 1745 BCE). This list is on Papyrus Brooklyn 35.1446, in the Brooklyn Museum. The site of the museum itself merely states the following in relation to the name, “Scholars assume that this is a hieroglyphic transliteration of the Hebrew name Shiphra.” The name means “to be fair” or “beautiful”, and may be related to, or even the same as, the Aramaic Sapphira and (up to slight morphological adaptations) as Shiphrah, the name of the Hebrew midwife. The name of the second midwife, Puah, is a Canaanite name which means “lass” or “little girl”.