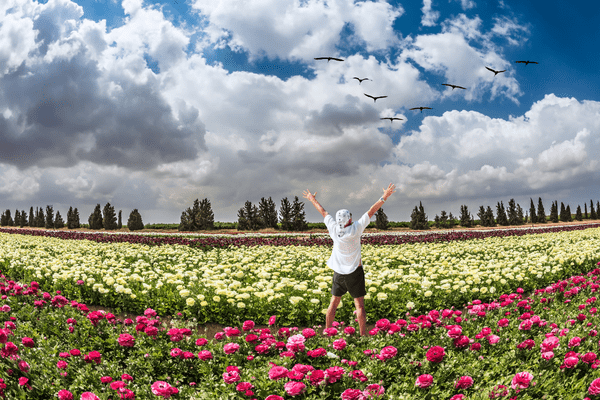 keeping Hashem's commandments and laws, which I enjoin upon you today, for your good.

Dani is a member of our small synagogue and every Shabbat, when we gather together after morning prayers, he jumps up and gives a speech on the weekly Torah portion. It isn’t nice to say, but his speeches drive me crazy. It always seems like he took the pages of lessons written by amazing rabbis, threw them into the air, and read them off the floor in whatever order they fell. Dani sounds deep and meaningful but he never totally makes sense. He draws connections between things that are totally unrelated. When he throws in what he claims is Kabbalah (Jewish mysticism), his speeches become unbearable.

But I still remember what he said last year about the Torah portion of Ki Teitzei (Deuteronomy 21:10–25:19). As usual, right after blessing the wine and grabbing a piece of cake, Dani jumped up and started to speak. At first, it sounded like his characteristic mumbo jumbo with a double dose of Kabbalah, but after I went home and thought about it, his words began to make sense.

Dani started out by describing the laws pertaining to marrying a woman taken captive during a war (Deuteronomy 21:10-13). This command always struck me as bizarre, but Dani spoke about one of the few aspects that made sense; giving her one month to mourn for her mother and father. That seemed reasonable given the circumstances.

But Dani lost me when he began chanting, “Elul! Elul! The month that the beautiful captive woman mourns is the month of Elul,” Dani exclaimed. “That is what the Zohar says.”

But the more I thought about it, the more it made sense.

People usually think of repentance as a process of regret over doing something wrong. We are trying to erase something from our past.

Mourning would seem to be absolutely the opposite process. When we mourn, we are torn with grief, missing a person who was a significant part of our lives. We want to bring back the past and hold on to the person that is gone.

But in certain sense the process of repentance is precisely like mourning. When we repent, we are mourning for our connection to God which was lost when we sinned. We have severed our relationship with God, and it is as if we have lost our closest relative.

Just as the captive woman was forced into exile from her family, our souls suddenly find themselves alone and in exile from the Lord. For our souls, being in a state of unrepented sin is like living in a foreign land.

It should be noted that the month of Elul is an acronym for a verse in Song of Songs:

I am my beloved’s and my beloved is mine; Song of Songs 6:3

The month-long preparation period preceding the Days of Awe is characterized by the soul longing to be reunited with God, our beloved.

Rabbi David Silverberg notes another similarity between the captive woman and the month of Elul. He cites the Ramban (Nachmanides) who explains in the name of Rabbi Akiva that over the month-long mourning period, the captive woman longs for her former idolatrous practices. She is grieving and gradually withdrawing from her former religious lifestyle and beliefs.  The captive is given a month to detach herself from her faith before she undergoes her process of conversion and marries the Jewish soldier.

So too, leaving sin behind is a process of transition that necessarily takes time. There is a gradually diminishing attachment to our previous negative practices, accompanied by a gradual strengthening of our attachment to God.

Hopefully, when Elul ends and Tishrei, the month of the High Holidays, begins, the transition will be complete. Just as the captive woman is prepared to leave idolatry behind and marry her holy husband after her month of mourning, we will be ready to attach ourselves completely to God.

During the month of Elul, we must first recognize how distant we have drifted from God. We then spend time gradually overcoming our negative habits and tendencies, so that we are prepared to commit ourselves to a higher level of religious devotion to Him on Rosh Hashannah.

While this is true specifically during the month of Elul, the ideas are timeless. Whenever we recognize that we are drifting, it is always an appropriate time to return to God and devote ourselves to Him. But we must understand that change takes time and be patient with ourselves. We must celebrate our achievements while recognizing that this is a process that will not happen in an instant.