The Priestly Blessing on the Intermediate Days of Passover 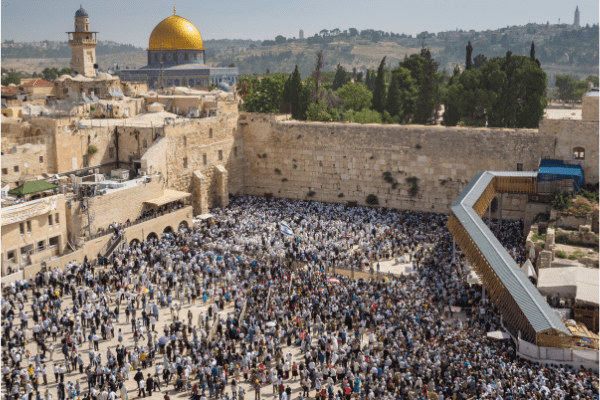 Speak to Aharon and his sons: Thus shall you bless the people of Yisrael. Say to them:

Twice a year, during the intermediary days of Passover and Sukkot (Feast of Tabernacles), a mass priestly blessing takes place at the Kotel (Western Wall) in Jerusalem. This event is usually attended by tens of thousands of Jews who are blessed by hundreds of Kohanim (priests). 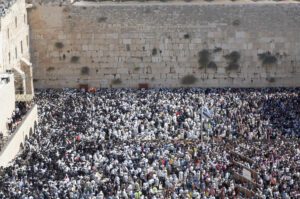 Worshippers gather for the priestly blessing at the Western Wall on Sukkot (Shutterstock.com)

The blessing is performed by kohanim, male Jews with priestly heritage who have a clear patrilineal tradition leading back to Aaron the high priest, brother of Moses. The lineage is rigorously protected, and its integrity has been proven in recent years as scientists have discovered a genetic factor common to most kohanim (priests).

Demographically, kohanim have always represented about five percent of the Jewish population. The Temple Institute recently instituted a registry for the priestly class as a step towards reinstating the Temple service.

The priestly blessing is said daily during the year as part of the morning prayer service, and twice during Sabbath and holiday morning prayer services. Before saying the blessing, men from the tribe of Levi wash the hands of the kohanim. The ritual may only be performed by a kohen and only in the presence of a quorum of ten male Jews. A kohen who is under the influence of alcohol or in mourning may not perform the blessing. 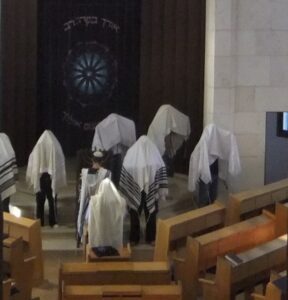 The priestly blessing at a synagogue in Ofra (Wikimedia Commons)

The blessing is performed by the priests as they hold their hands up with the fingers spread in the manner made famous by Leonard Nimoy (a kohen) when he played Spock on the television series Star Trek. The fingers of both hands are separated so as to make five spaces between them; spaces are between the ring finger and middle finger of each hand, between the index finger and thumb of each hand, and the two thumbs touch each other at the knuckle.

May the LORD bless you and guard you,

May the LORD make His face shed light upon you and be gracious unto you,

May the LORD lift up His face unto you and give you peace.

In Biblical Israel, the Temple was the center of the Passover holiday as the entire nation arrived to sacrifice the Paschal lamb and celebrate the seder as individual families. The bi-annual priestly blessing is an impressive reminder of the glory of the Jewish people coming together as a nation to serve God, something that was entirely lacking until the Jews returned to Jerusalem less than fifty years ago.