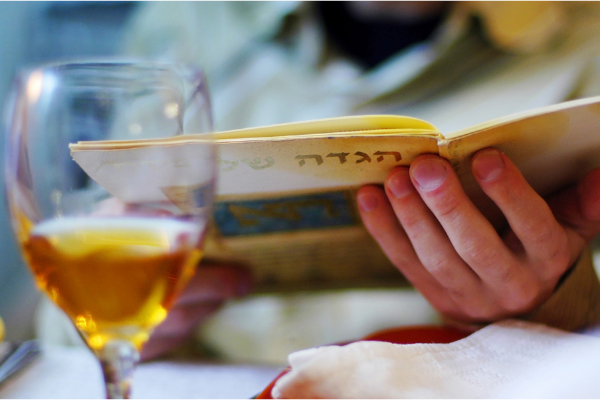 And you shall explain to your son on that day, ‘It is because of what Hashem did for me when I went free from Egypt.'

The Haggadah is the guidebook for the Passover seder. Haggadah literally means ‘the telling’ and, as its name implies, the main point of the evening is to tell the story of how God took the Jews out of Egypt through wonders and miracles. Seder simply means ‘order’.

Reciting the text of the Haggadah fulfills the Biblical commandment stated in the book of Exodus:

And you shall explain to your son on that day, ‘It is because of what Hashem did for me when I went free from Egypt.’ Exodus 13:8 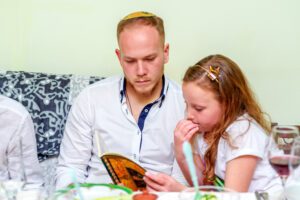 A father and daughter read the Passover Haggadah (Shutterstock.com)

Many elements of the Haggadah are found in the Mishnah. The first men­tion of a Seder ser­vice in the Mish­nah is by Rab­bi Gamaliel. He declares: ​“One who has not said these three words, Pesach, Matzah, and Maror has not done his duty.” It is believed this declaration was made around 90 BCE. The text of the Haggadah is believed to have been finalized in the first century, and could not have been codified before 170 CE as it quotes Rabbi Judah bar Ilai who lived at that time. Based on a Talmudic statement, it was completed by the time of “Rav Nachman,” however there is a dispute regarding which Rav Nachman the Talmud was referring to: Rav Nachman bar Yaakov (circa 280 CE) or Rav Nachman bar Yitzchak (360 CE).

Over the next sev­er­al hun­dred years, var­i­ous parts were added and mod­i­fied, until final­ly they were solid­i­fied around 700 – 800 CE. . Before the turn of the 16th cen­tu­ry, ​“Chad Gadya” and ​“Echod Mi Yodaya,” the final songs sung at the end of the Passover service were added.

Perhaps one of the most important and beloved texts in Jewish tradition, Haggadot (plural of Haggadah) have been beautifully illustrated to enhance the telling of the story. The best known and most popular Haggadah among American Jews, considered a cultural icon, is the Maxwell House Haggadah published in 1932 as a marketing ploy. It is still in print with over 55 million copies having been produced.

At this point in his­to­ry, 3,000 dif­fer­ent ver­sions of the Hag­gadah are believed to have been cre­at­ed.

The Haggadah is structured based on the 15 steps of the Seder:

Kadesh – Sanctify the day over a cup of wine.

Karpas – Dip a small piece of a vegetable in salt water.

Yachatz – Take the middle matzah and split it in half, setting aside the larger half to be used as the afikoman.

Maggid – Recite the story of the Exodus in great detail.

Rachtzah – Wash hands for the matzah with a blessing.

Motzi Matzah – Recite the blessing over the matzah, and eat the required quantity of matzah.

Maror – Eat the bitter herbs after dipping them into charoset—a sweet, sticky paste of nuts and fruits.

Korech – Eat a sandwich of matzah and maror.

Tzafun – The afikoman is now eaten.

Beirach – Birkat Hamazon, the Grace After Meals, is now recited.

Hallel – A collection of Psalms that was sung in the Temple while the Paschal lamb was being sacrificed.

Nirtzah – The Seder is now concluded. Those who are still awake may recite the Song of Songs.

Haggadot usually include the 10 Plagues as well as the Four Questions, otherwise known as the Ma Nishtana. The Ma Nishtana is customarily read or sung by the youngest seder participant. 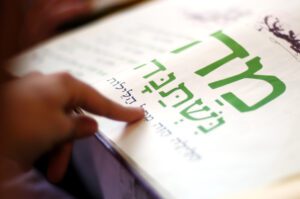