The Mystical Powers of the High Priest’s Head-Plate 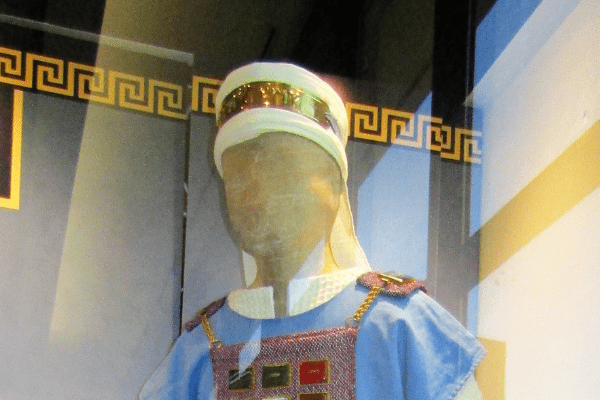 You shall make a frontlet of pure gold and engrave on it the seal inscription: “Holy to Hashem.”

The Torah mandates eight garments for the Kohen Gadol (High Priest). Among them is the golden head-plate, or the tzitz (צִיץ), which was engraved with the words kodesh laHashem (קֹדֶשׁ לַיהֹוָה), ‘Holy to God.’ The word tzitz means ‘to blossom,’ or ‘a flower,’ and is used in this manner in the Book of Isaiah (27:6, 28:1, 40:7-8). This is also hinted at by the word for ‘blossom’ used when Aaron’s rod produced blossoms and almonds (Numbers 17:23). This is furthermore supported by a handful of references in the Talmud which compare the priestly tzitz to a flower (Shabbat 63b, Sukkah 5a).

The gold plate had holes drilled in each of the four corners through which blue cords were threaded. These went around the High Priest’s turban (mitznefet), and were tied at the back of his head to hold the tzitz in place. The Talmud teaches that the tzitz was a gold band two fingerbreadths in width that encircled the kohen’s forehead “from one ear to the other” (Shabbat 63b).

Rabbi Abraham Isaac Kook suggested that this emphasis on the High Priest’s ears — organs for listening — indicates that he needed to be particularly “receptive to the inner voice of elevated thought.”

Wearing the tzitz reminded the High Priest of his position and his duties, that he is sanctified to God’s service, and must conduct himself in accordance with his responsibilities.

The tzitz had a specific purpose; to atone for any sin that might arise while performing the Temple service. The Talmud (Zevachim 88b) teaches that the tzitz also atoned for the sin of azut panim (literally ‘hardness of the face’). This roughly translates to brazenness or impudence. The Zohar states that if the Kohen Gadol saw the tzitz with the words “Holy to God” reflected on a person’s face, then he knew the person was righteous. But if he did not, he knew the person was brazen and in need of prayer.

The Midrash in Yalkut Shimoni attributes other mystical powers to the tzitz, describing how in the war against Midian (Numbers 31), Balaam tried to escape by magically flying through the air. Phinehas the Kohen displayed the tzitz, causing Balaam to fall to the ground where he was captured. The Talmud (Yebamot 60b) relates how the tzitz was then used to determine which Midianite women were guilty of trying to cause Israel to sin.

The Talmud (Shabbat 63b) also quotes Rabbi Eliezer, the son of Rabbi Yosei, as saying, “I saw [the tzitz] in Rome, and the words ‘Holy to G‑d’ were inscribed on it on one line”—this was in response to the other sages, who said that the inscription was on two lines.

The tzitz bore a remarkable resemblance to one of the two gold plates that was used in the Yom Kippur lottery that chose between two identical goats. Two gold plates, one inscribed with the word “to God” and the other with “to Azazel”, were presented to the Kohen Gadol. He blindly assigned each gold plate to a goat. The goat that was assigned the plate inscribed with “to God” was sacrificed in the normal manner, slaughtered by the Kohen Gadol and burned on the altar inside the Temple as a sin offering. The goat assigned to Azazel was brought to a cliff in the wilderness and pushed to its death. 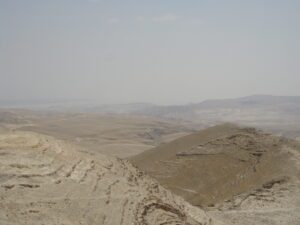 Cliffs of Mount Azazel in the Judean desert (Wikimedia Commons)

It was also similar to the gold tiara traditionally worn by Jewish brides traditionally, depicting the walls of Jerusalem. This custom was discontinued after the destruction of the Second Temple. 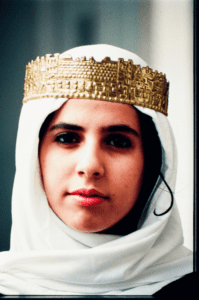