Symbol Of USA Could Have Been Moses, Not Eagle 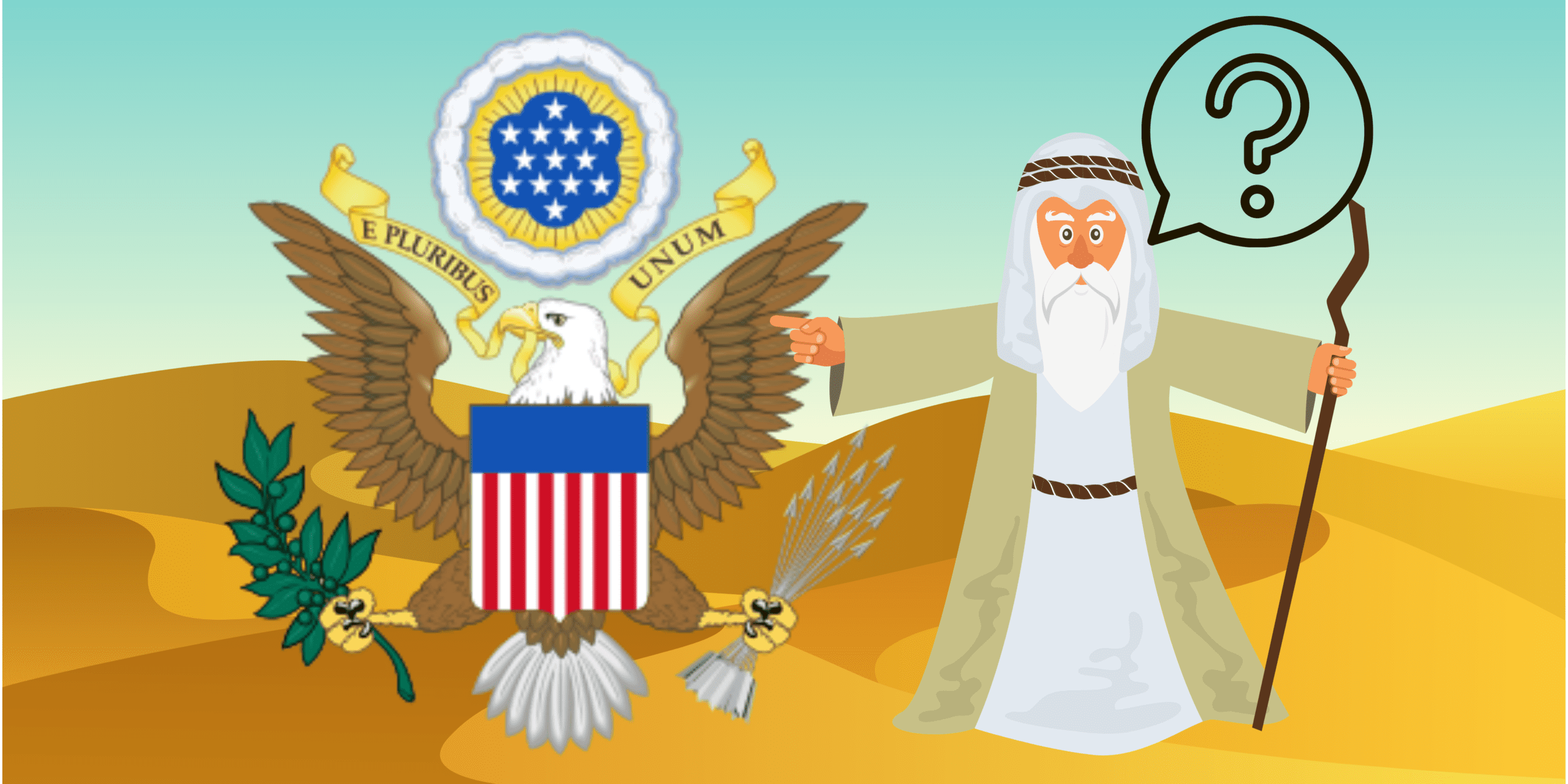 ❝And you lift up your rod and hold out your arm over the sea and split it, so that the Israelites may march into the sea on dry ground.❞   Exodus 14:16

Should we see the figure of Moses instead of a bald eagle in America’s seal?

The Great Seal is one of the most recognizable symbols of the United States of America. First used in 1782, the design has remained largely unchanged since 1885. The design appears on the dollar bill, passports, military insignia, official documents, and various flags. The Seal of the President of the United States is directly based on the Great Seal. The design features  a bald eagle with its wings outstretched and a shield on its chest. The eagle holds a bundle of 13 arrows in its left talon and an olive branch in its right talon. It also has its head turned towards the olive branch, on its right side, to symbolize a preference for peace. The olive branch is usually depicted with 13 leaves and 13 olives. In its beak, the eagle clutches a scroll with the motto E pluribus unum (“Out of Many, One”). Over its head appears 13 stars on a blue field, the number representing the original 13 colonies.

The Second Continental Congress appointed a committee on July 4, 1776, the day the Declaration of Independence was adopted, to select a design for a United States seal. The original committee members were  John Adams, Benjamin Franklin, and Thomas Jefferson. The committee submitted its recommendation on August 20, 1776, but Congress delayed its approval for six years, during which time it appointed two additional committees.

Adams preferred a seal featuring the image of the Greek god of Hercules contemplating images of Virtue and Sloth. But Adams admitted this imagery was “too complicated a group for a seal or medal, and it is not original.”

Franklin produced a biblical scheme: “Moses standing on the Shore, and extending his Hand over the Sea, thereby causing the same to overwhelm Pharoah who is sitting in an open Chariot, a Crown on his Head and a Sword in his hand. Rays from a Pillar of Fire in the Clouds reaching to Moses, to express that he acts by Command of the Deity.” The seal also featured the motto: Rebellion to tyrants is obedience to God.

Jefferson supported Franklin’s Biblical concept, although he preferred an image of the children of Israel in the wilderness, led by a cloud by day and a pillar of fire by night. But in addition to the emblem of Moses and Pharaoh, becoming so enamored with the motto that he incorporated it for his own personal seal design. He proposed an additional image for the reverse side of the seal:  “Hengist and Horsa, the Saxon chiefs from whom we claim the honor of being descended, and whose political principles and form of government we have assumed.”

This Biblical bent was explained in Philip Gorski’s historical analysis of the period titled “American Covenant: A History of Civil Religion from the Puritans to the Present.” Gorski, a professor of sociology at Yale, contends that the US was founded  as “a prophetic republic that would weave together the ethical vision of the Hebrew prophets and the Western political heritage of civic republicanism.”

Gorski explained that the image of Moses leading the Israelites over the Red Sea proposed by Franklin “shows how powerful, how influential the Exodus narrative was, and remained, during the revolutionary era.”

“In a way, it’s too bad,” said Gorski. “I would have preferred it [the Moses seal] to the eagle. It’s something more worth remembering, aspiring to.”

Yet another concept competing against Franklin’s Biblical vision for the seal was submitted by artist Pierre Eugène du Simitière who depicted  a shield consisting of the traditional symbols of the six European nations that had settled North America. The shield was surrounded by thirteen shields representing the states and flanked by the goddess of liberty and an American rifleman. It also bore the eye of Providence and the motto “E Pluribus Unum.”

When the design featuring a bald eagle was ultimately chosen, Franklin was disappointed, explaining this in a letter to his daughter, describing the bird as an “avian aristocrat”:

For my own part I wish the Bald Eagle had not been chosen as the Representative of our Country. He is a Bird of bad moral Character. He does not get his Living honestly. You may have seen him perch’d on some dead Tree near the River, where, too lazy to fish for himself, he watches the Labour of the Fishing Hawk; and when that diligent Bird has at length taken a Fish,… the Bald Eagle pursues him and takes it from him.

Franklin had also suggested an image of a rattlesnake to represent the nation while others argued for a turkey or a dove.

“For the Truth, Turkey is in Comparison a much more respectable Bird,” he wrote. “He is besides, though a little vain & silly, a Bird of Courage, and would not hesitate to attack a Grenadier of the British Guards who should presume to invade his Farm Yard with a red Coat on.”

The issue was finally settled in 1945, when President Truman officially mandated the use of the eagle in the Presidential Seal.