Was Esau the Father of Christianity? 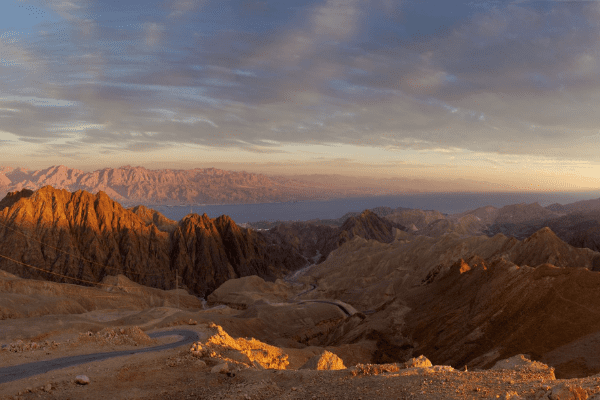 So Esau started back that day on his way to Seir.

While she was pregnant, Rebecca complained of pain. God reassured her that the twins she was carrying would both establish great nations (Genesis 25:23). The Bible follows the story of Jacob as his family grows into the nation of Israel. While less focus is afforded the older twin brother, Esau, the Torah does state that he is the progenitor of the nation of Edom, aptly named for the hairy Biblical forefather.

The name ‘Edom’, meaning red, hints at the skin coloring of its patriarch, Esau, as well as the red stew he exchanged for his birthright. His descendants established the kingdom of Edom, settling across the Jordan, also called the land of Seir, after they displaced the Horites. The mountains of Seir were ruddy red, a tribute to the ancestor of its new inhabitants. According to the Bible, the kingdom of Edom stretched from the Sinai peninsula as far as Kadesh Barnea. It reached as far south as Eilat, which was the seaport of Edom. It was bordered by Moab to the northeast, the Arabah to the west, and the Arabian Desert to the south and east. The boundary between Moab and Edom was the brook of Zered. 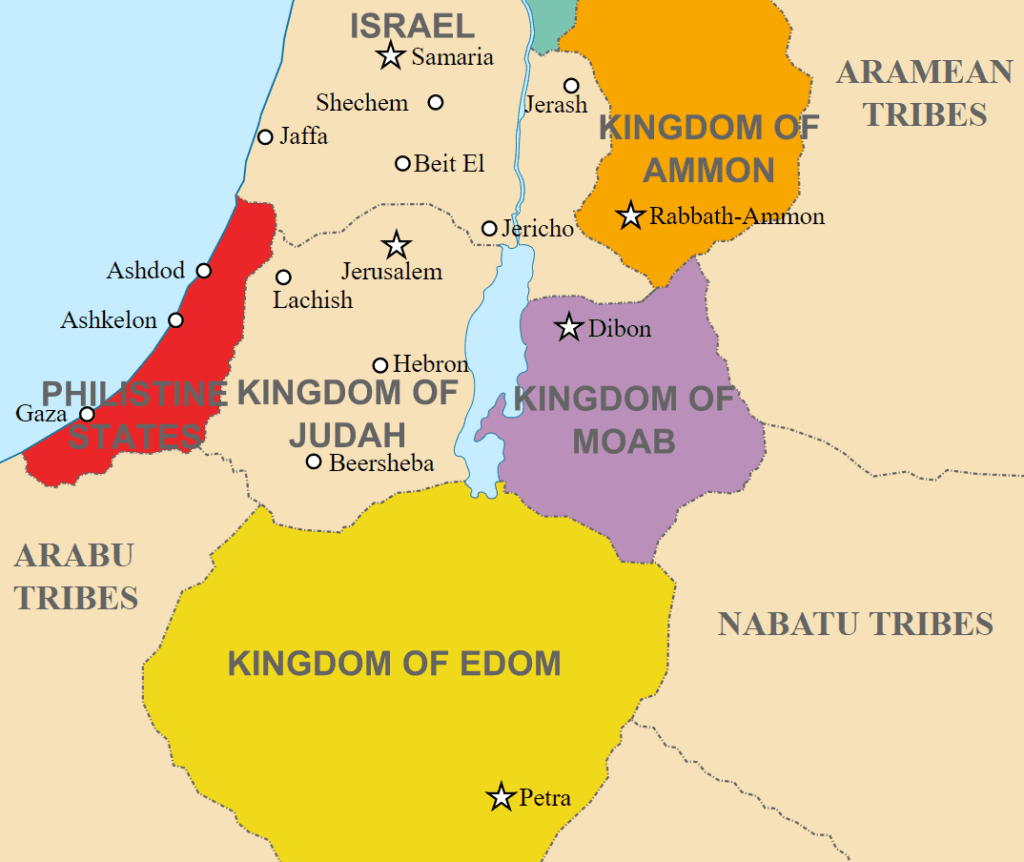 When the children of Israel left Egypt, they twice requested from the Edomites permission to pass through their land along the “King’s Highway”, appealing to their common ancestry. But the Edomite king refused their request. The Israelites skirted the land of Edom rather than risk conflict with its inhabitants. The King of Edom did not attack the Israelites, though he prepared to resist aggression.

According to the Torah, the congregation of Israel could not receive descendants of a marriage between an Israelite and an Edomite until the fourth generation.

Conflict between the Israelites and Edom came much later when King Saul defeated them (1 Samuel 14:47) and again when King David and his general Joab defeated the Edomites in the “Valley of Salt”. From that time Edom remained a vassal of Israel.

In the time of Nebuchadnezzar II, the Edomites may have helped plunder Jerusalem and slaughter the Judaeans in 586 BCE (Psalms 137:7; Obadiah 1:11–14). Some believe that it is for this reason the prophets denounced Edom.

Esther Rabbah, a collection of midrashic literature about the Book of Esther, made this claim:

Two orphans were left to [Esau], namely Remus and Romulus, and You [God] gave permission to a she-wolf to suckle them, and afterwards they arose and built… Rome. [Esther R. 3:5]

The Zohar notes that the greatness of Rome was attributed to the exemplary trait of Esau in honoring his father.

Rabbi Yesa said: It is written [in Malachi]: A son honors his father, and a servant his master. [Mal. 1:6] Such a son was Esau, for there was not a man in the world who showed as much honor to his father as he did, and it is thanks to this fact that he obtained dominion in this world [through his descendants the Romans]. [Zohar, Bereshit 1:146b]

Rabbi Moshe ben Nachman, known as Nachmanides or the acronym Ramban, writes in his book “Gate of Redemption” (1263 CE):

We, who rely on the opinion of our Rabbis of blessed memory, believe that we are presently in the exile of Edom (Rome) and that we shall have no respite from it until the coming of the Messiah. … The Edomites [the nation around Mount Seir, descended from Esau] were the first to mistakenly follow after the man who claimed that he was the Messiah. They also ascribed godliness to him. When they came to the land of Italy, their error spread to the nearby city of Rome. There in the days of Constantine who ruled over Rome …, the council under the authority of the bishop [of the city] of Rome determined their belief in him and established it [as the religion of the empire]. This, above all else, is the main cause and reason that Rome and Edom are considered as one kingdom although they are different nations. In spite of that [difference], they are related because of their uniformity of belief which makes them one people and one nation. … [The Sages of the Targum] thus explained that Rome is in Grecian Italy and that many of the Edomite people are contained therein. Hence, [Rome] is called “O daughter of Edom,” (Lament. 4:22)

This connection between the church and Esau was emphasized in a recent lecture, by the prominent Rabbi YY Jacobson who cited the blessing given to Esau after the blessing of the firstborn was given to Jacob (Genesis 27:40):

Yet by your sword you shall live, And you shall serve your brother; But when you grow restive, You shall break his yoke from your neck.”

According to Rabbi Jacobson, the ‘brother’ that the descendants of Esau will serve, or worship, is Jesus, a descendant of Esau’s younger brother, Jacob.

“Yitzchak (Isaac) was talking about an extraordinary phenomenon in history that will change history completely” Rabbi Jacobson explained. He described it as “a prophetic vision of how history is going to develop.”

If this is true, it is a source of hope, for the Torah forbids the Jews from harboring enmity towards the descendants of Edom (Deuteronomy 23:8). Rabbi Jacobson went even further, explaining that worshipping Jesus was preparation for the Christians to approach Jews in the end of days in order to learn how to serve the God of Israel.