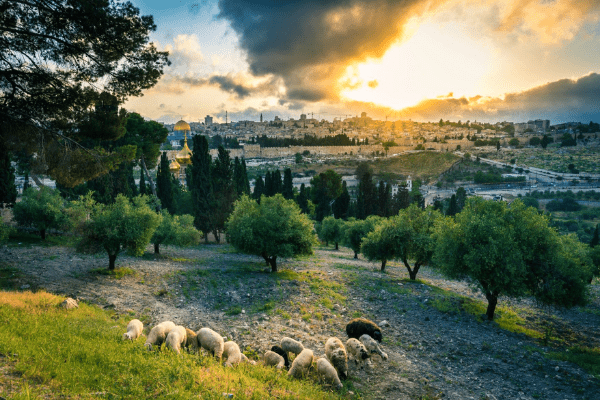 Speak to B'nei Yisrael thus: When a person unwittingly incurs guilt in regard to any of Hashem's commandments about things not to be done, and does one of them—

The book of Leviticus begins with a discussion of the korbanot, or sacrifices, that were brought in the Tabernacle and Temple. One of these sacrifices was called the korban chatat, or sin offering. The word chatat (sin) is derived from the word chayt, meaning “missing the mark.”

When a person sins, the first impulse is to run away and hide from God. But the Temple service was intended to bring Man closer to God. In fact, the word ‘sacrifice,’ implying a loss, is a poor translation of the Hebrew korban which is derived from the root ק,ר,ב , which means “to bring closer.” The very purpose of the korbanot was to bring people closer to God.

The sin offering was made for sins committed in ignorance, or unintentional sins. This refers to sins that a person committed because he forgot that his action would be defined as a sin. The differences between the types of sin offerings were based on the person bringing the offering rather than the sin itself. Four different categories of people are described in the fourth chapter of Leviticus: the High Priest (4:3-12); the whole congregation of Israel (4:13-21); a leader (4: 22-26); and a commoner (4:27-35).  A High Priest who sinned unintentionally would offer a young bull. A king or a prince would offer a young male goat. People in the private sector would sacrifice a young female goat or lamb, unless they were too poor, in which case they were only required to offer two turtledoves or pigeons.  Since korbanot must necessarily belong to someone, they cannot be wild animals.

In a sin offering, the live animal was brought to the altar, and the sinner was required to press his hands on the head of the animal (Leviticus 4:29) in what was called semicha (leaning). Commentators note the implicit message of the act was that the sinner should be the one to suffer, but God created this method of coping with sin, substituting the animal for the sinner. Perhaps for this reason, whenever the subject of karbanot is addressed in the Torah the four-letter name of God is used, indicating God’s aspect of mercy. 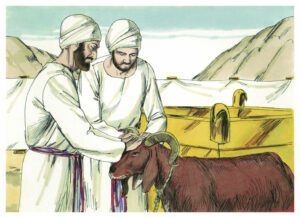 Korbanot require proper and full intention. A sin offering must be offered with the intention of being a sin offering. Presenting an offering as a thanksgiving offering, for example, when it is, in fact, a sin offering, invalidates the offering for both purposes. Another example was the Passover lamb which was a unique sacrifice, thanking God for placing all of the Children of Israel under His protection and taking them out of Egypt. Bringing the Passover offering with the intention of expiating sin cancels out the korban, making it invalid.

After the semicha, the animal was then killed on the north side of the altar, at which point the priest would take some of the blood and put it on the horns of the altar (verse 30). In some cases, some of the blood was also sprinkled inside the Tabernacle (verses 16 and 17). Then all the rest of the blood was poured at the base of the altar (verse 34). The fat of the sin offering was removed and burned on the altar. In some cases, the body of the animal was burned outside the camp (verse 12); in other cases, the meat of the sin offering could be eaten by the priests.

These last acts were performed exclusively by the kohanim (priests). After the dedication of the Temple in Jerusalem, these rituals were only performed there. Sacrifices and the Temple service stopped in the year 70 CE when the Roman army destroyed the Second Temple in Jerusalem. The practice was briefly resumed during the Jewish War of 132-135 CE, but was ended permanently after that war was lost. There were also a few communities that continued sacrifices for a while after that time.

Karbanot cannot atone for a malicious, deliberate sin. Sin offerings have no expiating effect unless the person making the offering sincerely repents his or her actions before making the offering, and makes restitution to any person who was harmed by the violation. If these conditions are met, the sin offering will remove the divine punishment.