Yom Hashoah: Memorializing the Holocaust and the Heroism 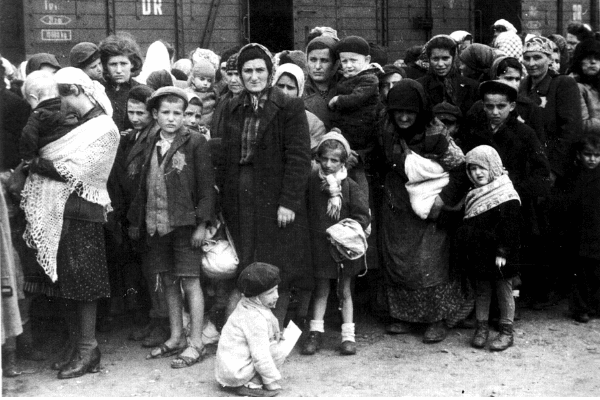 “Away! Unclean!” people shouted at them, “Away! Away! Touch not!” So they wandered and wandered again; For the nations had resolved: “They shall stay here no longer.”

Yom HaShoah (Holocaust remembrance day) is commemorated worldwide each year on the 27th of Nisan as a day to honor the memories of the six million Jews murdered in the Holocaust. If the 27th of Nisan is adjacent to the Shabbat (either Friday or Sunday), the date is shifted by a day. The way that the Hebrew calendar is fixed, the 27th never falls on Shabbat itself. It falls one week after the seventh day of Passover and a week before Yom Hazikaron (Memorial Day for Israel’s fallen soldiers) which precedes Yom Haatzmaut (Israel Independence Day).

These days are all interconnected. Passover marks the Jews leaving the horrors of Egypt and becoming a nation on their way to enacting the covenant with God in the Land of Israel. Similarly, the horrors of the Holocaust ended in 1945, directly preceding the miraculous return of the Jewish People to the land in 1948.

The date for Yom HaShoah was selected by the Knesset in 1951 and the name in 1953. The full name of the day is actually “Yom Hashoah Ve-Hagevurah“– literally the “Day of (Remembrance of) the Holocaust and the Heroism.” The name is intended to emphasize the resistance and resilience of the Jewish people while deemphasizing the perception of the victims being led passively to slaughter. 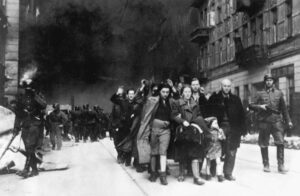 In Israel, Yom HaShoah opens at sundown with a ceremony at Yad Vashem, Israeli’s official memorial to the victims of the Holocaust. Sirens sound around the country at 10:00 AM the following morning. It is a strong point of national pride to stand at attention during the siren and even cars stop in place during the short period of intense national introspection and unity. There is no public entertainment on Yom HaShoah, as theaters, cinemas, pubs, and other public venues are closed throughout Israel. 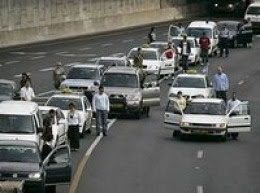 The day is a national holiday not a religious one, and there is no change in the daily prayer services. Many Jewish homes commemorate the Holocaust by lighting a yahrzeit (memorial) candle on this day. Since 1988, a memorial service is held in Poland on this day, following a three-kilometer walk by thousands of participants known as “The March of the Living.” Participants march from Auschwitz to Birkenau, two of the largest and most well-known Nazi concentration and exterminations camps. 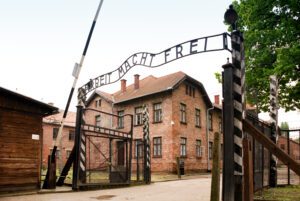 Entrance to the main camp at Auschwitz (Wikimedia Commons) 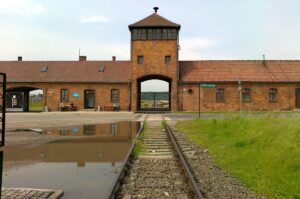