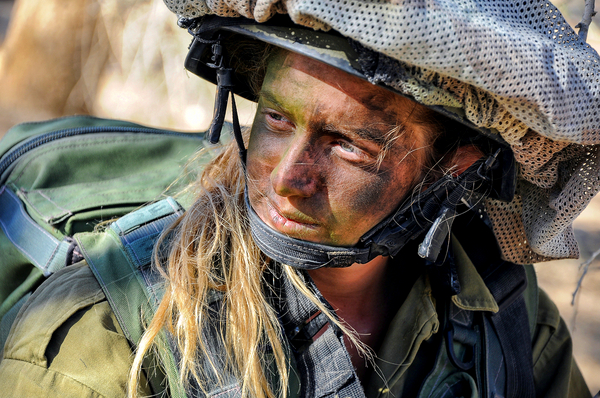 Then Yael wife of Chever took a tent pin and grasped the mallet. When he was fast asleep from exhaustion, she approached him stealthily and drove the pin through his temple till it went down to the ground. Thus he died.

Jael, wife of Heber the Kenite, acted as a warrior on behalf of the Nation of Israel during the battle against the Canaanites. Recognizing that they were going to be defeated by the Israelites, the Canaanite general Sisera ran away from the battlefield and sought shelter at the tent of Heber the Kenite. Jael welcomed him, but gave him milk to drink instead of water in order to make him drowsy. When he was fast asleep, Jael drove a tent peg through his head, thus killing Sisera and helping to rid the Children of Israel from the oppression of the Canaanites at that time.

Jael, however, is not the only great woman to have acted as a warrior on behalf of the Nation of Israel. Today, women form an important part of the Israel Defense Forces, serving at its highest levels. In 2011, Orna Barbavai made history, overcoming her underprivileged upbringing to become the first woman in IDF history to reach the rank of Aluf (אלוף), ‘Major General’. “I am proud to be the first woman to become a major general, and to be part of an organization in which equality is a central principle,” Barbivai said. The mother of three retired from the IDF in 2014, but serves as an inspiration to countless Israeli young women who enlist in the IDF each year and who know they can reach the highest levels not only in the IDF but throughout Israeli society.