What happened to the Temple Menorah? 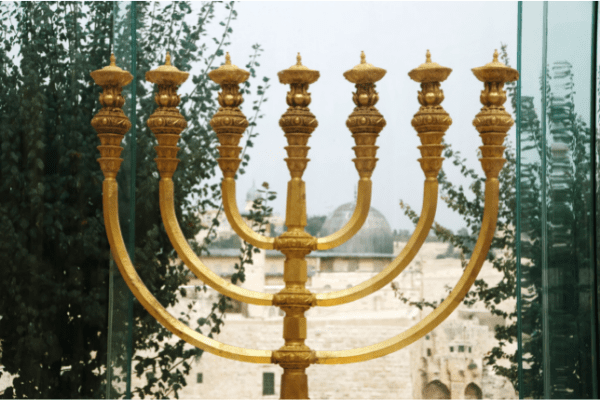 The Arch of Titus, constructed in 81 CE by Emperor Domitian to commemorate the victory over the Jewish rebellion in Judaea, stands on the Via Sacra in Rome to this day, bearing witness to the fact that the Romans carried away the golden Menorah from the Second Temple in Jerusalem. The arch contains panels depicting the triumphal procession celebrated in 71 CE after the Roman victory culminating in the fall of Jerusalem and provides one of the few contemporary depictions of artifacts of the second Temple. Being one of the few remaining depictions of the Temple Menorah, the image on the Arch of Titus was used as the model for the emblem of the state of Israel.

The arch is huge, measuring 50 feet in height, 44 feet in width, and 15.5 feet in depth. The south inner panel depicts the spoils taken from the Temple in Jerusalem. The golden candelabrum, or Menorah, is the main focus, and is carved in deep relief. Other sacred objects being carried in the triumphal procession are the gold trumpets, the firepans for removing the ashes from the altar, and the Table of Showbread. These images were likely originally colored gold, with the background in blue. 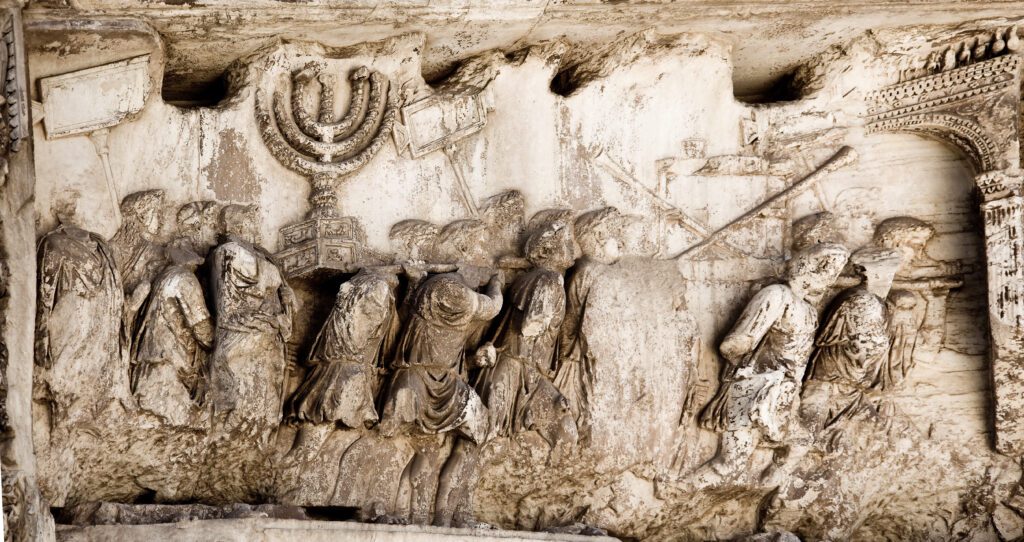 The Arch of Titus (Shutterstock.com)

The event depicted on the arch was witnessed by Josephus Flavius, a Jewish historian of priestly descent captured by the Romans. Josephus noted that the spoils from the Temple, including the gold Table, the gold Menorah, and the Torah scrolls, were the centerpiece of the Roman celebration.  Josephus reported that the Temple artifacts, including the Menorah, were indeed taken to Rome and placed in Vespasian’s Temple of Peace, completed in 75 CE.

The historic trail of the Menorah seems to have been lost during the 5th century. Historians conjecture that the artifact was taken by the Vandals who sacked Rome in 455, after which it was melted down and the gold dispersed. But there are no historical accounts from this time relating the event.

In the second half of the 12th century, a Spanish Jew known as Benjamin of Tudela made a tour of the known world, traveling as far east as Mesopotamia. He claimed in his journal that the Jews of Rome knew that the Temple vessels depicted on the Arch of Titus were hidden in a cave in the Vatican.

The arch stands as a symbol of one of the greatest national tragedies in Jewish history and, for a long time, Jews avoided the arch. At an unknown date, a local ban on Jews walking under the arch was placed on the monument by Rome’s Chief Rabbinate. The establishment of the modern state of Israel helped assuage this pain and the ban lifted in 1948. This was made public at a Hanukkah event in 1997.

Yet for some, the arch remains as a symbol of the destruction of the Jewish Temple. On the somber day of Tisha B’Av in 2020, Dror Eydar, Israel’s ambassador to Italy, made an impassioned presentation at the Arch to Titus.

Though the original Menorah taken by the Romans has yet to be found, in 2019, a small group of German Christians commissioned a full-sized replica cast in metal and had it coated in gold. Like the menorah depicted in the Arch of Titus, the replica was made with several of the branches broken. The 265-pound gold menorah was brought to Israel in time for the country’s 71st Independence Day. The journey was planned to take the reverse route the original Menorah had taken.

“We want the Menorah to stand as a reminder to Christians that we broke something,” Alexander Dietz, one of the group’s members said. “This can be a sign of our repentance. The Jews have returned but the Christians need to fix what we broke, to return what we stole.”

“We saw that the stealing of the Menorah in 70 CE was not just stealing of gold,” Dietz said, emphasizing that a great spiritual light was stolen. “After stealing the Menorah, Rome declared themselves as the city of God, the true Israel. God never left Israel but we need to return what was stolen. Everything needs to return to the source, where it began.” 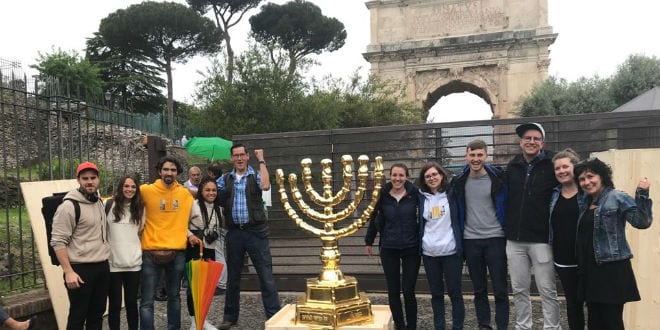 A replica of the golden menorah in front of Titus’ Arch in Rome. (Courtesy)